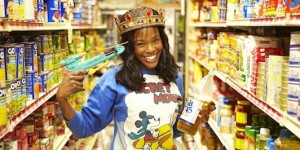 Open up Twitter, type in “azealia banks”, and witness the 23 year-old rapper-singer-songwriter’s solitary crusade against any soul that she sets in her sights. A lot of artists talk huge game about being above caring about the public’s opinion of what they do or say but make no mistake, they, like many of us, shiver when they hear the phrase “did you hear what Azealia Banks said this time?” She utterly embodies the term “outspoken”; her Twitter is essentially a platform through which she unleashes barrage after barrage of unfiltered passion.

Banks is seemingly inexhaustible when it comes to her unflinching hostility, and the list of targets who have been unfortunate enough to come under her heat reads like a who’s who of key music industry figures and past and current stars. There’s T.I., Lil Kim, Diplo, Nicki Minaj, Rita Ora, The Stone Roses (?) and of course, Igloo Australia, whom Banks reserves a singular hate for. No one is too large for her to size up and attack, proved most recently by her brief spar with Erykah Badu, an indisputable hip-hop/r&b/soul/black music dignitary. Her long list of enemies made in her short career garnered Banks the reputation of an unproductive troublemaker during the period of time in which Banks’ debut Broke With Expensive Taste languished in label hell. As Hazlitt writer Sarah Nicole Prickett notes, Banks had been seen as more famous for her acidic insults than her actual music.

Thankfully, in a Yankee Hotel Foxtrot-like move that has nailed yet another nail in the coffin of the traditional music industry model, Broke With Expensive Taste was released independently in the later part of last year, to considerable acclaim. As it should have been, seeing as it’s very good, great actually. Banks shines all throughout the record, singing and rapping her way through an eclectic mix of styles and genres, from surf-pop to Latin music to bouncing dance tracks. The album feels like a relief; after all, there’s always a doubt that talents riding on the strength of a few tracks can actually keep up a convincing full-length affair but Broke With Expensive Taste is a 16-track showing of artistic force. Honest pop standouts such as “Chasing Time” exhibit Banks’ intense crossover potential and slicker tracks such as “Desperado” showcase her impressive rapping skill and crazily amazing rhythmic sense.

Broke With Expensive Taste delivers on the promise that “212” gave hope to, three long/short years ago. When “212” first appeared on YouTube in 2011, everybody was immediately struck by Banks but what continues to be interesting is the surprise that so often greets her latest feuds and enemy-baiting. What drew everyone to Banks at first, apart from her undeniable talent, was her charismatic personality. Anybody who had seen that video remembered that Mickey Mouse sweater, the driving back-beat, and most importantly, the playful venom that Banks spit at the camera behind that ever present smile. I’m not sure I’m allowed to write the lines from “212” that, 3 years ago, had music fans rushing to their laptops to find out who this grinning rapper was but what I’m trying to say is that what lent Banks her initial fame was the incendiary nature of her style. After listening to “212” you had no choice but to fall back.

So when Banks is “picking fights” or “speaking out” it’s not like she’s acting out of character. She’s always been about not holding back. However, what’s truly perplexing about Banks’ outspoken personality is what she’ saying, and how it’s received. A cursory look through the artist’s Twitter reveals that Banks’ is a target of heavy vitriol herself; the rapper receives no shortage of hate. Of course, hate is a common byproduct of society, and we all know how social media has only extended its reach and immediacy. But the hate angled at Banks seems particularity ugly, mostly due to its racial and misogynistic undercurrents. Banks has no trouble getting defensive with her haters, but the question stands: why are these things being said in the first place? Telling someone their music sucks is one thing but calling them an ape taps into a particularly bleak vein historic racism. And then there’s the threats and violence leveled at her, which point to a larger problem that social media has magnified.

As a young, female, black artist, Azealia Banks endures torrents of racial and sexist abuse of a truly appalling order. What stands out to me more than the fights she picks with celebrities is the things being said back to her, for they hint at a condition in which female artists, and especially female artists of color, are targeted and diminished in ways that males never experience. But where the perplexity kicks in for me is in how Banks handles some of the hate she receives. Slurs are use; she makes fun of another contemporary by hinting that they’re a transsexual, and in one terrible instance, Banks puts down a random by making a reference to molestation by a family member. These insensitive reactions of Banks don’t reflect kindly on her at all, but taken in the context of the grotesquerie she faces on a regular basis, they take on the quality of a defensive mechanism, conscious or not. Confront ignorant ugliness with the like. I could be wrong of course, and most likely I am, but one thing I’m fairly certain of is that Azealia Banks, while heavily flawed, is not the biggest problem here. Yes, she should be held accountable for her words but I find it a little disconcerting that the issue that most people latch onto with the most energy is her latest feud with _________. And another point, some of the things that Banks is saying deserve serious attention, primarily her words about modern minstrelsy, appropriation, and being aware of a racial divide in a country that at times seems to deny the very existence of said racial divide.

For an artist who has burned bridges with music figures left and right, it is clear that Banks has made herself, through design or otherwise, an artistic and professional isolation of sorts. The talent is certainly there but there is no desire whatsoever to pay homage or be agreeable for her career’s sake. And while this is an island in its own way, as a black female with a ferocious independence and a no holds barred approach to public speech, Banks is on another island altogether. And while Banks still needs to answer for her own words and slurs, an examination and discussion of why this second island exists is sorely needed.