Father John Misty. Probably a fitting moniker for a man who claims to have “discovered” himself while sitting naked, atop an oak tree. Josh Tillman is the real name of the shroomed-out, van-driving, gentleman we came to love in 2012 when he released his hilarious, honky-tonkish debut, Fear Fun. 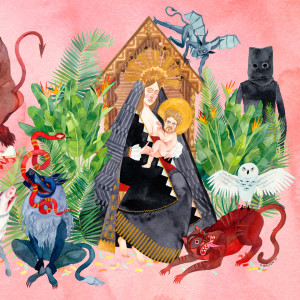 With his first album as Father John Misty, Tillman came out unadulterated and charmingly honest, a man free of any obligation to take himself seriously. Before that, he was only known as the unenthusiastic drummer of Fleet Foxes, who opened his own shows as folk singer, J. Tillman playing morbidly depressing songs that, frankly, weren’t very good. But Fear Fun marked a transformation for the man. He cast himself as a comedian doing standup at a rock n’ roll concert, and somehow he fit the role. It seemed as if he had finally found what would make his music brilliant: his sense of humor. Something he could surely stick to.

This dude was good to go make 9 more records about road-trips, acid trips, whatever kind of trips you’d like. It didn’t matter; people would have eaten it up. But the Father John Misty character is all about confronting harsh and hilarious truths. A second Fear Fun wouldn’t be true to where Tillman’s character had gone since his we last caught him in 2012. So instead, we get I Love You, Honeybear.

Thematically, I Love You Honeybear is the next chapter in the tale of Father John Misty; sequel to the drunken cowboy adventures of Fear Fun. It is a concept album relaying the events of Tillman’s relationship with a woman named Emma, whom he met in parking lot a few years back and whom he now calls his wife. It’s important to take Honeybear on as an album. While its songs are surely convoking on their own, the measure of their sincerity really comes to light in the context of each other. Honeybear shares its strengths with its predecessor; raunchy arrangements, tongue-in-cheek lyrics, and bare-naked realism.

Compositionally, this album is a little more diverse than Father John’s first. He still injects his pieces with the neo-psychedelic-folk sounds that fans came to appreciate with Fear Fun, but he’s added more layers to the “rock-band” set up he had before. A string section weaves its way into nearly every one of the 11 tracks, and a bright, southwestern horn section storms in on the bridge of “Chateau lobby #4 (in C for Two Virgins).”  The lullaby-Beach Boys vibes come out on “The Night Josh Tillman Came to My Apartment” except instead of singing about his perfect woman, Tillman just bashes some poor girl who claims that “like literally, music is the air she breaths.” The most odd song on the album, “True Affection,” even features a drum machine and a series of synths, complementing the lyric on technology’s emotionally dulling presence in modern romantic relationships.

The closest Honey Bear gets to the picturesque radio “single” is during the swelling chorus of ”Strange Encounter” where Tillman vows to clean up his act in the name of, you guessed it, love. His voice gets tumbled into a flurry of eerie strings and frantic guitars that leave you wondering if this might be one of the few times he’s serious.

The next track on the album is titled “The Ideal Husband” and it’s a banger. Easily the most “rock n’ roll” tune we’ve heard from Tillman yet, and maybe the most genuine. Its chorus is the album’s climax, with our front-man finally giving in to the horror of being cliché. That’s something really magical about this album; the songs on Honeybear are riddled with so many of the same clichés as classic “love” songs but here they are tackled so uniquely. On the songs leading up to “The Ideal Husband,” Tillman just barely covers up his lovey-dovey feelings with his sarcasm, like a naked man cupping his balls in public. But afterwards he really opens up to the fact that he’s not too cool to be in love, with tracks like “Holy Shit.”

Track 11, “I Went to the Store One Day” closes with Josh asking Emma a question. “I’ve seen you around, what’s your name?” drops the album off right where it began. He so cleverly convinces you to hit play again and it gets better every time.

People are inevitably going to compare this album with Fear Fun (I suppose I did so myself quite a bit) and try to pick favorites, but that’s dumb. The answer to the question of whether this album is great doesn’t rely on Fear Fun’s status. Firstly, the answer is yes, it is a great album. It’s fucking spectacular. It is a development both musically and thematically; maturing its textures from the joyful arrangements of Fear Fun and advancing the epic legend of the Father John Misty character on to its next chapter. On I Love You, Honeybear Tillman shows he isn’t done stripping nude. He’s taking us on another crazy drug trip, but this time around his drug of choice is love; something that I think a lot more people are willing to experiment with, than they were his “Canadian Shaman’s” ayahuasca.