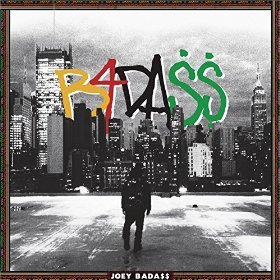 B4.DA.$$ is a record made for rap purists, which is a welcome change of pace in the era of personalities and quotability (see Shmurda, Bobby) taking the genre’s center stage. However, as a result, the record can get uncomfortable when it leaves Joey’s comfort zone of self-exploration and braggadocious wordplay over boom-bap beats. Joey’s natural flow and mastery of the craft of hip-hop over meticulously-crafted laid-back beats makes for an album with a definite confidence and direction, even if the 90’s rap sound feels disingenuous at times.

I first discovered Brooklyn rapper Joey Bada$$ with “95 Til Infinity” off of his 2012 mixtape “Summer Knights.” The most jarring aspect of the song was the reference to his birth year, 1995: the same year I was born.

As a result, I’ve always found it easy to empathize with his particular perspective on hip-hop. Joey honed his flows and wordplay during a time rap purists believed the golden era of rap had long since passed. Growing up during the era of 50 Cent, Lil Wayne, and Lil Jon, it was easy to feel as though the pursuit of superstardom and partying heavily outweighed the artistry and storytelling of rap found in the late 90’s. Joey clearly laments missing out on this era, shouting out The Notorious B.I.G., 2Pac, Big Pun, and ODB at different points throughout B4.DA.$$.

Even more noticeably, the rapper utilizes very personal storytelling that seems much more likely in a 1995 record than one released in 2015. He ruminates on the death of Capital Steez, a member of his Pro Era crew and a very promising rapper who passed away in 2012 at the age of 19. Joey confronts his pain with cleverly explained images of his brother in heaven with hip-hop’s greats. Joey also clearly struggles with his rising star at such a young age, but litters his album with thematic and lyrical shout outs to his roots and family. These issues of lost loved ones and staying close to one’s roots are hip-hop staples, but it feels as though it’s been ages since a rapper with a platform as large as Joey’s has confronted them with this much pure rapping ability.

First things first is I been rehearsing these verses

In hopes that I hit the surface and keep myself afloat

The determination and precision behind his voice reveals that he is a dedicated student of the rap game. Although his preferences clearly lean towards “classic” rap, he has studied rap in its entirety: the culture, the pitfalls, the technique, and his contemporaries. He shouts out Schoolboy Q in a particularly lyrical complimentary manner and plays upon the self-aware themes and lush instrumental layers from the very popular territory of Chance the Rapper and Childish Gambino.

Bada$$ presided closely over the beats for the album, enhancing the throwback nature of his record by crediting The Roots, the late great J Dilla, and DJ Premier, three of the most well-established names in the history of rap production. Statik Selektah is a natural choice to produce; Run Up On Ya and Curry Chicken, two of the strongest tracks, are both produced by Selektah. His beatmaking throughout his career has consistently romanticized the late 90’s in a manner similar to the rapping style of the young Bada$$. Hit-Boy adds a twist to “Belly of the Beast,” turning the boom-bap vibe of the album on its head. He highlights Joey’s Jamaican roots by removing the characteristic boom-bap drum pattern entirely, leaving the atmospheric, smokey effects to stand on their own.

The album includes crackles and pops similar to those of a record on a turntable, as well as an “Introlude” [sic] highlighting the childish nature of chasing money. These details feel forced and out of place as we face the second half of the 10’s. The recycling and reinvigoration of a bygone era in rap’s history seems to be Joey’s goal on this record, but these touches feel entirely corny. Also, I can respect limiting the features on your debut studio album, but with a talented roster of rappers supporting him within Pro Era and the larger Beast Coast movement in New York, a few guest spots would have livened up the album significantly. Action Bronson hops on to “Run Up On Ya” and his manic yelp complements Joey’s rigid, biting flow. I just wish there could have been a few more moments like that on the album.

The album’s low points, “Teach Me” and “Escape 120”, attempt to liven up the album with some double-time drums, but Joey’s flow and self-aware content does not mix well with the rushed beat. Raury’s Andre 3000 flow works pretty well over the drum and horn driven “Escape 120,” but this just served to increase my frustration with the lack of guest spots on the rap playground that is the lineup of beats on this record.

Joey Bada$$ still has some serious room to grow, but luckily, the rap community has supported him from the outset. Plus, the guy is my age. If he continues to get support from these A-List producers, he’ll learn what he can and can’t resurrect from the 90’s and produce something truly great. For now, the stronger moments of B4.DA.$$, “Curry Chicken,” “Christ Conscious,” and “Belly of the Beast” will stand as bold statements that hip-hop is alive, well, and respecting of its forefathers in 2015.