If you’re a fan of Jack White or The Black Keys, then you’re probably well aware of their little rivalry. In the last couple of years White has made a real ass out of himself over The Black Keys. Not only did he bash on the band in a Rolling Stone interview and accuse them of riding on his coattails and being unoriginal, he also pulled his kid out of school to avoid association with Dan Auerbach’s child. Sure he went on to post an apology to The Keys and other artists on his website but come on, he said some pretty shitty stuff about a band that shares much of the same audience as his own, with nothing to provoke him other than his ego. 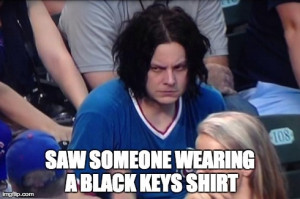 Like a lot of folks my age,  I went through a pretty intense garage-rock phase the first few years of High School and was super into both Jack White’s work as well as that of The Black Keys, for I, unlike Mr. White felt as if I shouldn’t have to choose a side.So when I was given the opportunity to see Jack White play at Bridgestone Arena on Wednesday, I had a couple of thoughts racing through my brain. Firstly, the 15-year-old version of myself trapped inside my head started peeing his pants with excitement. But simultaneously I was thinking back to The Black Keys arena show I witnessed a couple years ago on their El Camino tour and how it left such an awful taste in my mouth. Could Jack White, the man that truly believes he is a head above bands like The Black Keys, really outshine them? Did this guy actually have something to back up his claims? Was Jack White Justified in being a dick?

Let me begin by running you through my experience with The Black Keys. At the time (three years ago), I was super into The Black Keys and was stoked to be seeing them live after watching clips from their Live at the Crystal Ballroom DVD countless times. But instead of absolutely shredding in a cool little room of diehard fans like the one in the DVD, the band was playing in a hockey stadium full of moms on their cellphones, drunk 28 year old girls in high heels, and the guys that brought those girls in an attempt at getting laid. There was no collective atmosphere in the room and the band themselves seemed very flat, as if they were just going through the motions. It was truly disappointing.

Jack White’s show started showing promises of being pretty different early on. Firstly his opening acts were spot on selections. It’s not necessarily that they were big names (THEY WERE: Country Legend, Loretta fucking Lynn, played just before White) but that they made the huge stadium show feel so personal, like it was taking place in some tiny dive bar. After Loretta Lynn’s set, one of Jack White’s henchman emerged from a massive blue curtain to request that the audience refrain from using any cell phones to take photos or video during the show, as White wanted their full attention. Part of me thought this was a cool idea and part of me thought it was a little overly pretentious. But I didn’t really have much time to think about that stuff because a few minutes later, Jack White was out there plowing away at the chords to “Dead Leaves and the Dirty Ground.”  He echoed his henchman’s message repeatedly asking his audience if they “were all in this together?”

The first few numbers were real doozies, and included two of the singles off his latest album, Lazaretto. But White’s happier, mellower tunes, like “Hotel Yorba” and “Blunderbuss” stuck out above the screechier, crazier ones. When things would get heavy, it seemed like each individual member of his band was trying to be too interesting and drawing attention away from White himself. This was a real bother throughout the show and often detracted from some of the moments that should have been the most memorable.  While there is a time and place for some sick nasty fills, White’s drummer, Daru Jones got really annoying as he would often stampede over Whites singing or soloing with his own uproar. That’s not to say that most of the arrangements weren’t well put together; “Lazaretto” featured some wicked fiddle harmonies and the last song of their first set, “Top Yourself” (a song by Whites super group, The Raconteurs) was drawn out for a solid 15 minutes and featured solos from every member of his band. 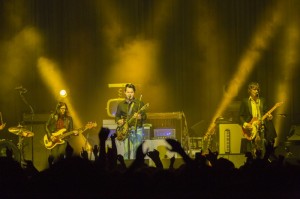 Speaking of the Raconteurs, this is where White’s show really went to the next level. It was already wrapping up to be a pretty solid stadium show, but after the first 1 hour set, White’s greasy little henchman emerged once again from his big old curtain, this time to introduce the Raconteurs. This surprise appearance was the first time the band had gigged together in over 3 years. 15-year-old me was once again pissing himself. They blasted through their songs “Salute Your Solution” and “Steady as she Goes” with Daru Jones filling in on drums for Patrick Keeler before the rest of White’s band came back out along with Loretta Lynn. The now nine-piece band jumped into “Portland, Oregon” a song White and Lynn recorded together in 2004, followed by Loretta Lynn’s song “Whispering Sea” which she’d never sung live before. The adorable chemistry between White and Lynn as he leaned in to sing with her as well as the visible joy of the band put these couple numbers over the top. White then finished up the show with 7 more songs with his normal crew, of course rounding off the night with a thundering rendition of “Seven Nation Army” (who would have guessed). 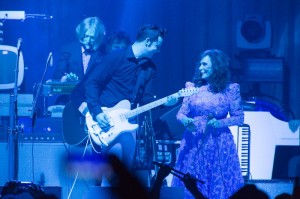 So Jack White’s set wasn’t flawless, but when I look back and compare it with The Black Keys’ performance it really was a head above. He’s still probably an egocentric nutcase but hell he truly believes in himself and he wants his fans to believe in him to and that’s something worth respecting, I suppose. And damn, this guy knows how to command an audience without being cheesy, which is no easy feat. So yeah, Jack White is a dick for bashing a bunch of other artists like The Black Keys, but maybe, just maybe, he’s a little justified in being a dick.