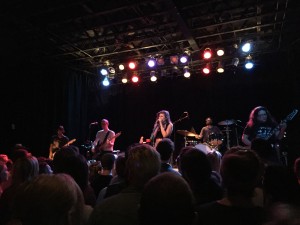 Although I had heard of Best Coast prior to coming to college, ironically, it wasn’t until I left the west coast that I started to listen to them. Whether it was an actual appreciation for their music or just the nostalgia I felt about my Southern California hometown that piqued my interest, I do not know. Best Coast is technically a duo between lead singer/guitarist Bethany Cosentino and guitarist Bobb Bruno with a few other band members brought in seemingly just for touring. Formed in Los Angeles in 2009, almost every other song they make is an ode to the stereotypical Southern California lifestyle.

Best Coast played on this past Tuesday, September 15, at Exit/In, and after a long day of classes (and minimal sleep), I made my way over at around 9:15 PM. Although, in my mind this was one of the more popular artists I was going to see at Exit/In, the venue was not sold out, or even, more surprisingly, particularly crowded. I was easily able to find a position to watch the show close to the front. Despite the fact that the concert started at 9, the opener, The Lovely Bad Things, a band slightly more on the punk side of the surf-rock spectrum, had almost finished by the time we arrived. It was then another half-hour until Best Coast took the stage.

Best Coast started with song “Heaven Sent” from their latest album, California Nights before plowing into one of their more popular songs (and my personal favorite), “The Only Place”. From there, it was a steady stream of upbeat and beachy tunes, mainly from California Nights but a few from older albums The Only Place and Crazy for You. One of my favorite songs they did was “California Nights” off (not surprisingly) their latest album. In my opinion, this was the best song off that album, which describes basically an appreciation for that feeling you get at night in Southern California (I can vouch for this one—that feeling is real!).

Despite the fact that I openly admit to loving this band, I would be the first to agree that their songs all tend to sound vaguely similar and their lyrics aren’t always the most insightful. That’s fine for listening to them casually, such as while driving or doing homework, but in an actual concert setting, the similarity of each song gets a little draining. Maybe it was the four and a half hours of sleep I had gotten the night before or the hours of homework I had still ahead of me, but the lack of variability in their nineteen-song setlist made the whole experience kind of boring. Not to mention, the band members put in little effort to interact with the audience. I think the crowd was feeling it too—there were a couple sad attempts at a mosh-pit throughout the set that just never seemed to pick up any momentum. 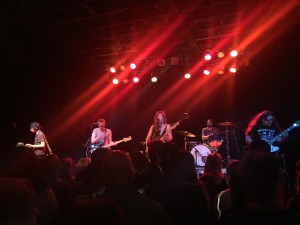 Cosentino crooning about California being “The Only Place” for her

Best Coast played their arguably most popular song “Boyfriend” in the one-song encore. To be totally honest, I usually hate when bands play more than two songs in their encore, so this notion was definitely appreciated. While walking back to our dorms, a couple friends and I were talking about how it was a shame that despite the obvious talent that the band has (Cosentino’s voice sounded just as good in person as it does in recordings), they couldn’t translate that to better lyrics and more variable melodies. This concert experience hasn’t necessarily changed my opinion about the band, but it also just was kind of a lackluster performance compared to what I had been expecting. From here on, I’ll probably just stick to Best Coast for road trips and when I’m feeling particularly nostalgic for my California roots.