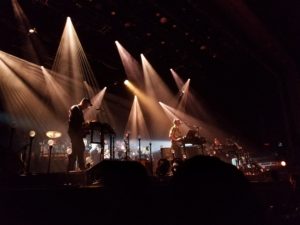 Not many moments in my life have caused me to shake with excitement. In fact, the most recent I can think of is when I got into Vanderbilt with the presumed notion that Bon Iver would eventually tour through Nashville and I’d be there to see it. It took until another album and my Junior year, but it finally happened. I couldn’t stop shaking for an hour.

No concert could have been a better one for my first visit to the Ryman Auditorium. Having panicked about not getting a ticket after the presale sold out in a minute, I arrived credit card in hand to pick up an E row ticket that I bought in the one minute it took the regular sale to also sell out. While the merch line reached well into the upper balcony, it was a blessing as it gave me a chance to see some of Swamp Dogg’s opening set. A legend in Justin Vernon’s eyes, Swamp Dogg has recently recorded a techno album with the band. Accompanied with a wonderful soul band and happy stage presence, Swamp Dogg proved a worthy accompaniment for Bon Iver. 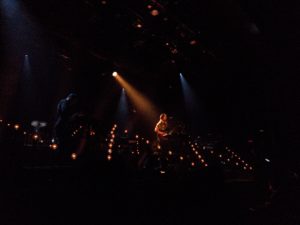 Being my first visit, I was happy to hear that the acoustics in the venue were worthy of the praise that others imparted. The opening “hum”s of “22 (OVER S∞∞N)” overtook the auditorium and the band launched into an almost uninterrupted performance of 22, A Million. Vernon stopped occasionally to thank the crowd as well as introduce 29 #Strafford APTS as a drugged-up country song meant for Nashville. I’m often critical of “boring” crowds, but this was a show meant to sit and take in. The drums pounded, thanks to two complete kits on stage, and Bon Iver’s immense layering of noise shined in the performance. The ability to perform a track like 715 – CRΣΣKS almost identically to the album and the constantly dancing lights showed just how much passion was present in the performance. Once the band had finished performing the album, Vernon seemed to be overwhelmed by the crowd’s response. With a giant grin on his face, he began a slowed down, acoustic rendition of Calgary, a track from Bon Iver, Bon Iver. He continued into a run through the first three tracks of the album. The pounding of drums in Perth, the synthy rearrangement of Minnesota, WI, and the powerful performance of Holocene absolutely stunned me. Hearing almost half of my favorite album ever gave me a feeling no other concert has before.

The band then headed off stage, returning for Woods and Wolves. Wolves was the only song the entire crowd stood for, with Vernon egging the crowd on to scream “WHAT MIGHT HAVE BEEN LOST?” with him. The cacophony of voices and closeness to falling apart present at the end of the song created an applause that lasted over two minutes beyond when the band left the stage.

This was a perfect concert. Perhaps you’ve been waiting to see your favorite artist live too. I can only hope it’s this good for you.