My attendance a few weeks ago at the strange 4-day escape from reality called Bonnaroo Music & Arts Festival marked my fifth year at the event. Early on every year the same doubtful thought runs through my mind: Why do I continue year after year to put myself through this? Sometime between my first use of the less than gleaming porta-potties and the realization that yes, I would indeed be this sweaty and disheveled for the next four days, that moment of panic comes.

Peter, my festival cohort and first time Bonnaroovian, and I arrive at our campsite late Thursday afternoon. Our efforts to get there earlier were in vain. We tried to take an alternate route. We ended up on a dirt road that wound us through a field of cows and around the side of a mountain. Future Bonnaroo-goers: stick to I-24.

I start unloading the car and watch as the three girls camped next to us with sorority letter bumper stickers attempt and repeatedly fail to assemble a tent/dome/spaceship that I swear is the size of a three-car garage. I swat at a guild of grasshoppers that have for some reason taken over the outside of only our tent.  I try to take deep breaths. 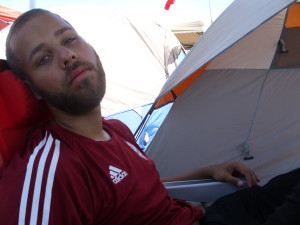 Pete discovers that it is indeed hot. 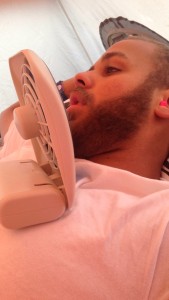 As we set up our campsite, our neighbors struggle to do the same. I am now swatting away grasshoppers and the wandering tent poles from next door.  Upon completion,  Peter and I celebrate with a beer and head into Centeroo, where the stages, vendors, and main venue is located. By now the sun is starting to set and the air feels cooler.

We walk into Centeroo, and an incredible thing happens just as it does every year.

I look around and the panickey doubt subsides, replaced with a kind of fluttery warmness. There’s nothing quite like taking in this scene. Elaborate costumes. Lots of bandanas. A ferris wheel, a water slide, and a giant mushroom shower. Food trucks and rows and rows of vendors. Though I’ve certainly been one to complain about the number of people packed into this square mile, it’s easy to accept it amidst all the electric enthusiasm. The increasing collection of good memories from my Bonnaroo experiences comes back to me. I suddenly feel at home again. I realize this is a community from all over gathered in one place for the music. Bonnaroo’s mantra, “Radiate Positivity”, is followed closely. It’s a pretty great feeling to be a part of this unique and accepting environment, if only for a few days.

And there you have it: the corny, sticky-sweet version of why I continue to go to this damn thing. 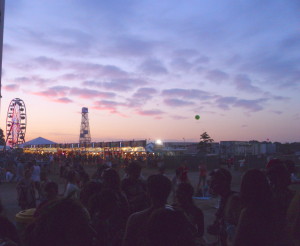 Anyways, if you’ve made it this far I thank you and commend your patience and tolerance for my sentimental tendencies. Now enjoy my top three festival highlights and then go listen to some Ty Segall (explained why momentarily) to offset the fucking gooeyness of the previous couple paragraphs. 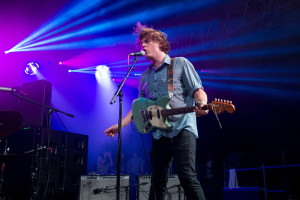 Neither Peter nor I recognize anyone playing on Thursday night. We allow ourselves to feel very, very unhip for a few minutes then make the decision to see someone named Ty Segall who’s playing This Tent at 1 AM. As phone battery is a precious resource and cell service is a myth anyway, we do no research on whom we’re about to see. We secure a good spot about 15 minutes before the show and stand waiting, our legs and eyelids starting to feel heavy. Ty Segall takes the stage. Holy shit. He manages to simultaneously blow us away and completely revamp our energy in like, less than five minutes. Ty Segall’s brand of crunchy guitar punk differentiates itself in his knack for catchy melodies and a blues twinge. He wails through his hour + set with no shortage of volume, head banging, and stage dives from mysterious backstage longhaired dwellers. When the show ends, Peter has a bruised ankle from the moshers next to us and my ears are ringing. We agree that we likely just made our best discovery of the festival. 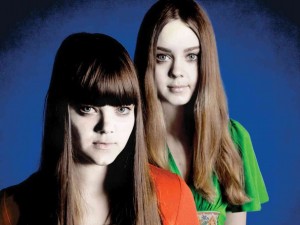 There’s an addictive quality to this Swedish folk duo embodied in their Bonnaroo performance. Their 3pm Saturday set was the perfect midday sun escape. The versatility of their intricate harmonies was most exemplified on the two covers they performed. Their version of Simon & Garfunkel’s “America” was hauntingly beautiful and Bob Dylan’s “One More Cup Of Coffee” was dark, intense, and bone-rattling.

The audience sings along to “My Silver Lining”, the single off their latest release Stay Gold. The lyrics sound like a stream-of-consciousness from a young adult who’s either A) going through an early midlife crisis, or B)  just discovered Kerouac (“I’ve woken up in a hotel room, my worries as big as the moon, Having no idea who or what or where I am”). Yet the romping melody and instrumentation are enough to negate the cliches. These girls might be magic.

The set ended with their most popular song “Emmylou”, a slide-guitar love song filled with references to country royalty: “I’ll be your Emmylou and I’ll be your June if you be my Gram and my Johnny too”. 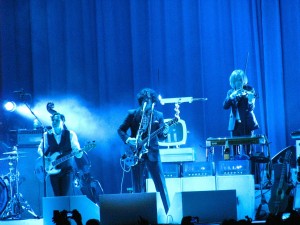 Listen, readers. I’m not going to lie to you. Jack White and I- we have a history. I can’t write this with the utmost journalistic objectivity. Before we start, I have to come clean. I know roughly each and every word to the majority of White Stripes and solo Jack White tracks. I once ran a Jack White centered Tumblr blog. I have five Jack White t-shirts.

All that being said, I don’t think I am letting my fanaticism get the best of me when I say that Jack White’s show was one for the history books, or, you know, whatever they’re using out there to document cool stuff that happens at music festivals. Mr. White’s notorious reputation of sometimes-alienating eccentricity certainly precedes him.  Jack White has also expressed a distaste for music festivals. So, I cautiously wondered what was in store.

He kicked off the show toting a bottle of champagne, an enticing swagger, and a White Stripe’s favorite, “Icky Thump”. His band was mesmerizing. Lazaretto, Mr. White’s second solo album, had just dropped four days prior, and the excitement could be felt. The band killed a 2 and a half hour set that included a heavy dose of White Stripes and Raconteurs favorites along with newer songs from Lazaretto and 2012’s Blunderbuss. He even “squeezed” a Led Zeppelin cover, “The Lemon Song” (get it?) into the middle of the White Stripes’ “Ball and Biscuit” (as if that song needed any more sexual energy… though, I mean, I’m definitely not complaining).  The perfectly balanced set-list was combined with an unusual amount of cheeky but enticing chatter with the audience. Was Jack in rare form because Bonnaroo is just down the road from his adopted hometown of Nashville? Was it because as a fourth time Bonnaroo performer he holds this festival a little closer? Was it just the champagne? Some things we may never know. I do know that the show was a rare concert experience. I’ll certainly never forget it, and from the couple of texts I got (shared below), I’d wager to bet that there are a few more Jack White fanatics on the rise. I should start a school or something. 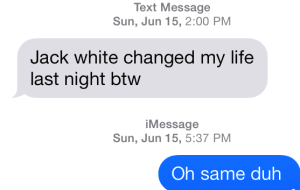 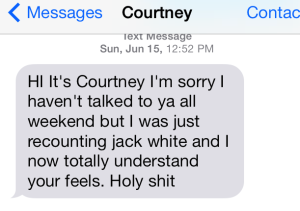 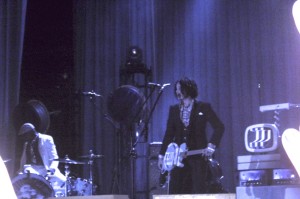 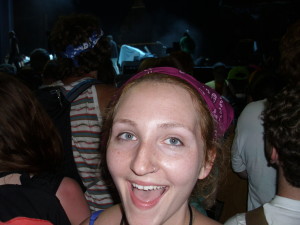 It comes around for only four days a year, which is why Bonnaroo ends up being so jam-packed with good vibes and great moments. Bonnaroo 2014 was no exception.