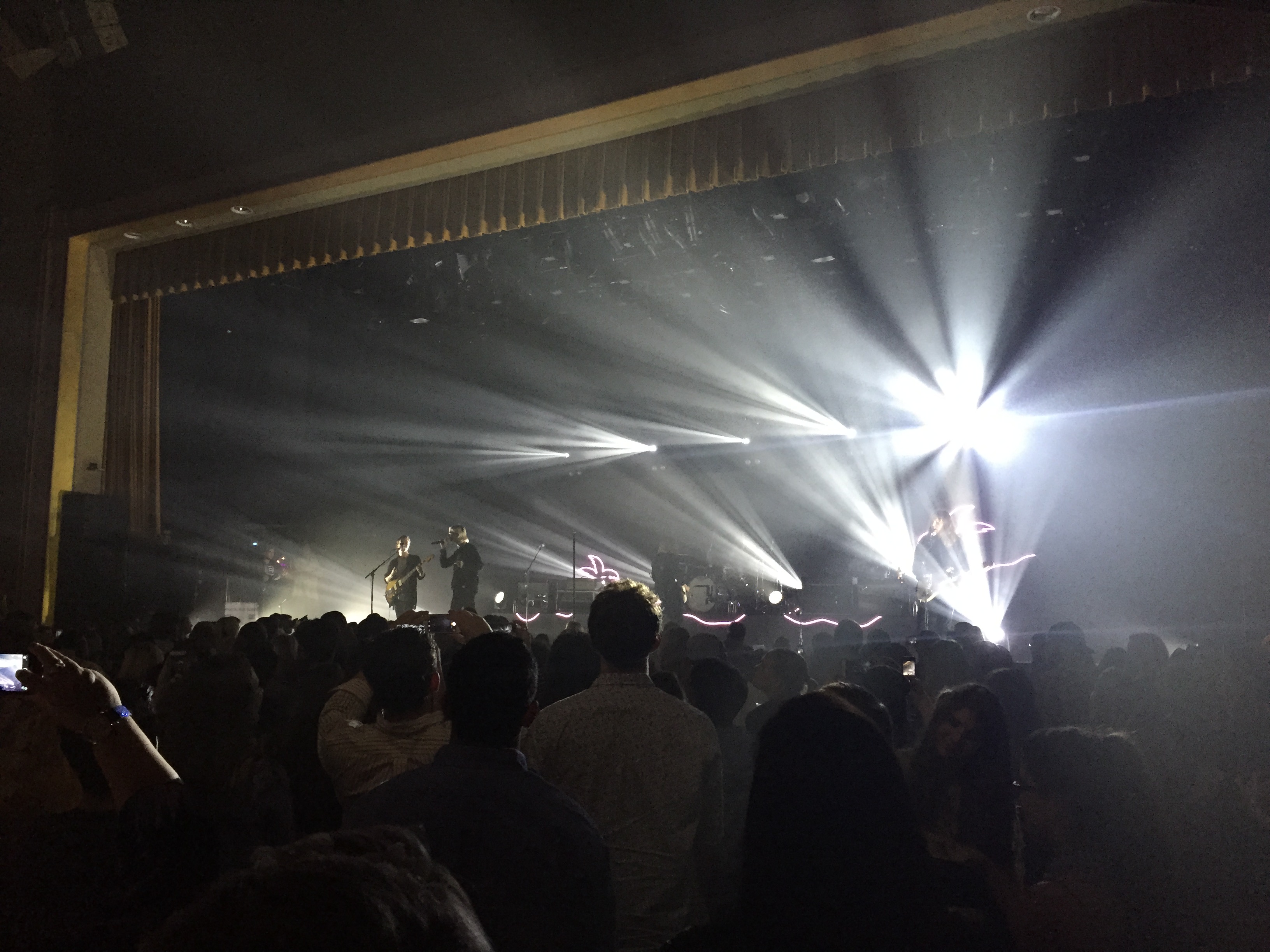 Last Friday, September 25, while most of my fellow Nashville concertgoers were headed to the first night of Taylor Swift’s 1989 stop at Bridgestone Arena, a friend and I were on our way to the Ryman to see West Coast indie pop/rock group, The Neighbourhood. My friend had never been to the Ryman, so this summer when tickets went on sale at a fairly low price we decided to just go for it (little did we know that Sufjan Stevens would be announcing a show there merely 2 months later…sigh). The Neighbourhood seemed like a strange choice for the Ryman, as they had certainly lost a good deal of relevance (and not to mention, airplay) since the release of their first album in 2013. Despite that, I was excited mostly to see if they could pull off their unique experimental tracks live.

We missed the first opener, Hunny, but arrived just in time to see the second opener, Bad Suns, another California alt-rock group. They played a pretty short set of indie-pop melodies, some of which I knew well, some of which I merely recognized. If I were the same person as I was in high school (which, most of the audience was—more on that later), I would have loved their performance. It was boy-band indie rock to its very core. Even their lead singer seemed egocentric, which I have come to know is a characteristic of that genre. Beyond their stage presence, which I still found slightly grating, I honestly didn’t get that much out of their performance. Maybe I’m just getting cynical in my old age, but I think it’s more that I’m hyperaware of less than stellar concert performances in Nashville. I see so many amazing shows every year that one “meh” show really sticks out.

After Bad Suns finished their set, a brief interim preceded The Neighbourhood coming onstage. I was feeling a little wishy-washy about the whole experience at that point (I’m not saying I was regretting not getting tickets to T. Swift, but… I wasn’t not regretting it either). Fortunately, I was pleasantly surprised by the set that followed. In short, The Neighbourhood killed it. From the very first song (“Prey”, off their album that is coming out at the end of October) and their solely black and white color scheme, I knew my previous hesitation was unwarranted. It takes a certain amount of bravado to pull off the glam-rock aesthetic, and lead singer Jesse Rutherford certainly did not lack in that arena. The first half of the concert was mainly songs off their first (and currently, only) LP, I Love You., but they also played a few new songs as well. 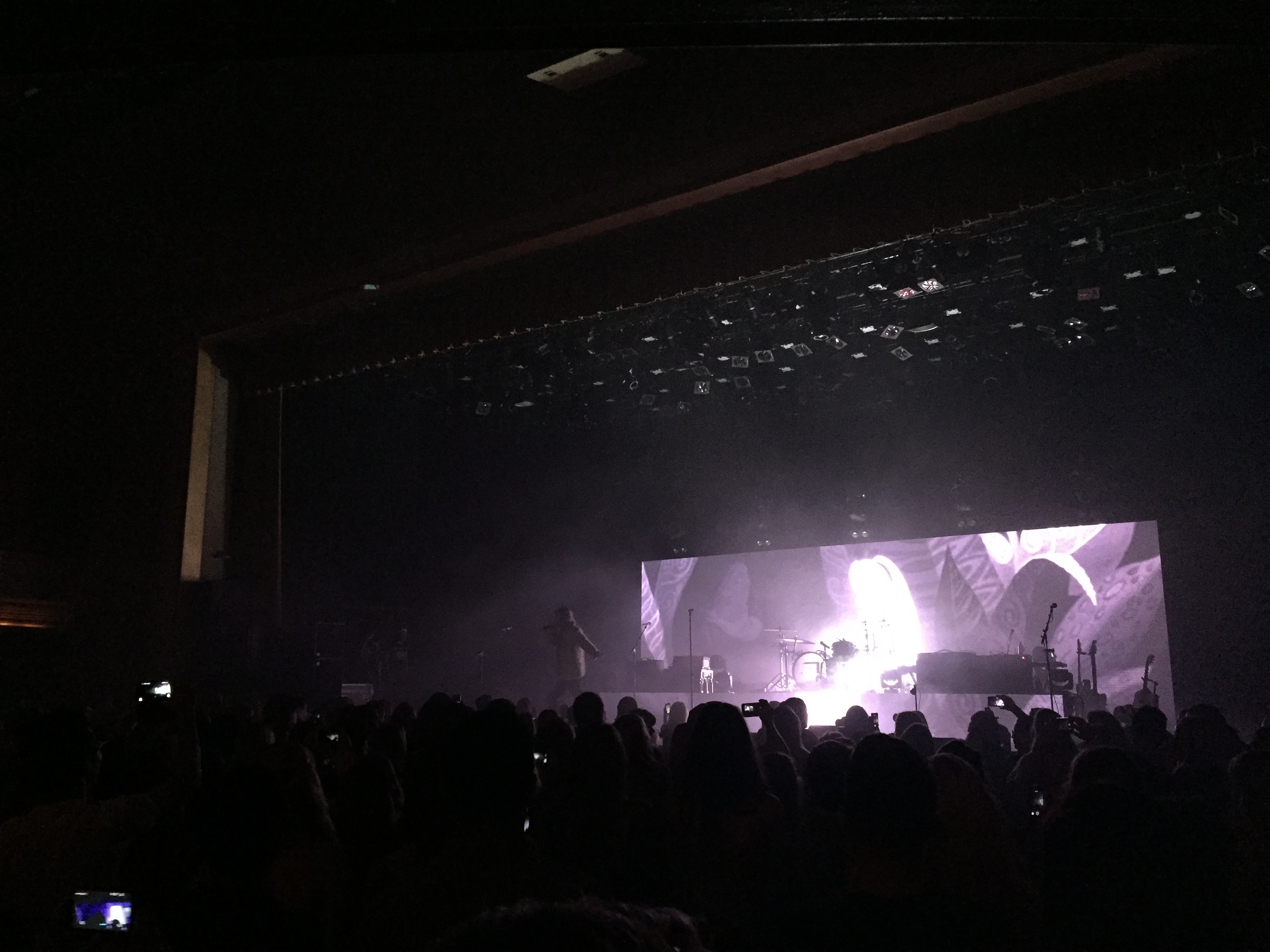 The set took a strange turn about three quarters of the way through. They had a pseudo-encore, in which all band members left the stage. A few minutes later, Rutherford came back wearing no shirt and a fur jacket and spent the next ten or so minutes singing a mash-up of all of their more rap-centric songs. I can’t say I was entirely shocked by this turn of events, but it was an interesting experience nonetheless. Additionally, lights at concerts always generally fascinate me, and I was impressed by how their lights perfectly matched the feel of the set. The whole band came back out for a cover of Gnarls Barkley’s “Crazy” before finishing with “Sweater Weather” (of course) and new single, “R.I.P. 2 My Youth”.

In all, it was a sweet concert, certainly more than I was expecting after Bad Sun’s somewhat lackluster open. One of my favorite things to do at concerts is observe the crowd; in fact, the crowd experience is often what makes or breaks a concert for me. Whether this was a Ryman thing or just a Neighbourhood thing, I’m not really sure, but the average age of the audience was probably about 17. The younger members there were waaayyy more hip (read: “Tumblr-esque”) than I was at that age (they still are, let’s be real), but it was just a drastically different experience than I’m used to. To be fair, that’s probably because most of the concerts I go to are at Exit/In or Marathon Music Works, where the venue itself is 18+, but it still made me feel just… old. The Neighbourhood’s last song, then, “R.I.P. 2 My Youth” had extra meaning for me, as not only was I at a different stage of life than the rest of the audience, but I’m also nearing the culmination of my college career, which is a real “RIP to my youth”. But on the plus side, at least now I can say that I’ve faced an existential crisis at a concert. That’s a first.