On October 14th, Cigarettes After Sex, a self-described “ambient pop collective,” played their second of two Chicago shows at Lincoln Hall. I brought my mom along for the show, hoping she wouldn’t feel too out of place, but I was surprised upon our arrival at the venue to find a somewhat mature crowd, comprised mostly of twenty and thirty-something hipsters. That weekend in Chicago was cold and rainy, a perfectly fitting atmosphere for Cigarettes After Sex’s melancholic sound. 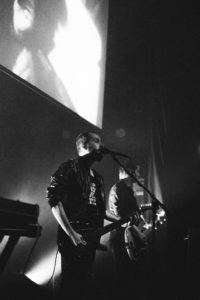 The band, led by singer and guitarist Greg Gonzalez, released their self-titled debut LP on June 9th, a deeply personal, ethereal record with cogent romantic themes, and their show perfectly reflected their music. Cigarettes After Sex made the interesting choice to forego an opener, but my impatience thanked them for it. Before they came out, a screen was positioned above the stage, and a black and white clip of snow falling over an urban setting with retro, instrumental music played, suspending the audience in a state of potent curiosity as we waited for the band to emerge. The screen switched to a new clip and the band came out, beginning with “Starry Eyes,” slowing down and applying their unique flavor to the Roky Erikson song. 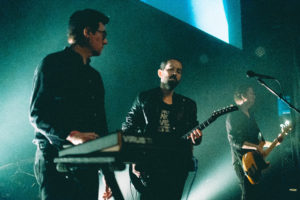 They continued on in this pattern, matching each song to a black and white clip of imagery to complement. We watched the sun peak through a cover of clouds, followed along a slow motion landscape distorted through a marble, and stared into the almost unblinking eyes of a young woman. Apart from the clips that accompanied each song, Cigarettes After Sex put on a no-frills show. They kept the lighting simple, spending most of the show being backlit by pale oranges and blues, covered by a light fog. All these components, in combination with their hazy, distorted instrumentals and Gonzalez’s smooth, androgynous voice created a pervasive dream-like atmosphere as they navigated through their set list composed of tracks off of their album and EPs, as well as an almost unrecognizable cover of REO Speedwagon’s “Keep On Loving You.” 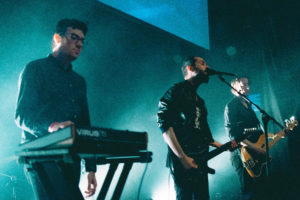 Cigarettes After Sex committed to this no-frills attitude in other respects as well; their stony stage presence lacked audience interaction entirely, conforming to the stereotype of their genre. Though they didn’t literally gaze at their shoes, their reserved and introspective demeanors were in keeping with the shoegaze tradition. Overall, I really enjoyed the relaxed environment Cigarettes After Sex facilitated. They put on a very impressive performance, and though their presence wasn’t the most engaging, other aspects of the show had the right amount of spectacle to fascinate, and I hope to see them again in the future.

*Huge thanks to my friend Sebastian for the photos, check out more of his photography here.