Before we all stuff ourselves in the spirit of celebration, here’s a belated concert review/interview. 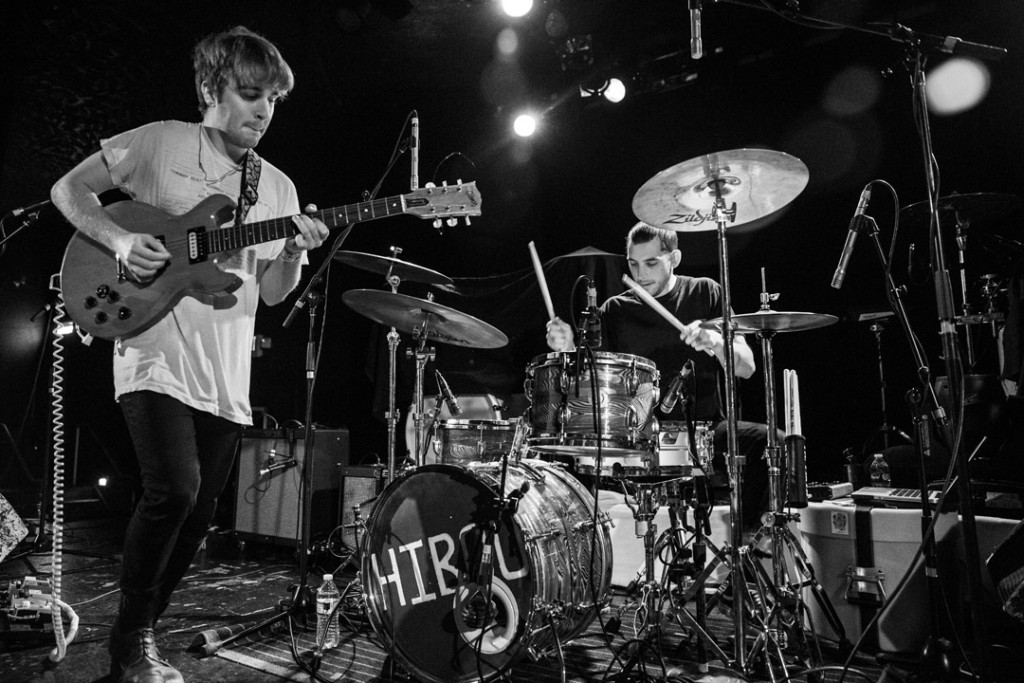 When’s the last time you went to a concert and the music started ON TIME? That’s what happened last week when Hibou opened for Metric at Marathon Music Works. I wandered in around 8:02 thinking I was early but the band had already begun. I don’t know about you all, but waiting for a concert to begin is my personal hell. Thank you, Hibou, for your punctuality; I promise the audience appreciates it. Hibou played a solid set of songs from their debut album (also called Hibou). I definitely recommend “Above Us” and “Shutter Song”. The group certainly has a lot of energy. Michel, in particular, likes to spin around in circles with his guitar. Above all, they seemed to really enjoy themselves, which I think is the most important thing. After their set, I walked over to the singer and arranged an impromptu interview with the band.

For the first time, I ventured beyond those black curtains surrounding the stage. I did not expect to find a room full of old video games. Remember those joystick games you would pay a quarter to play in a pizza parlor? Exactly like that. The room contained nothing else except for two enormous leather couches. So, with the background noises of a bandmember shooting aliens, I had a quick interview with Peter Michel.

Hibou (pronounced *eee-booo*) is a Seattle-based band headed by Peter Michel. As you may or may not know, Hibou is actually the French word for owl. Michel told me that he once experienced a spiritual connection with an owl out by his family’s cabin. Having heard this story, a friend brought him back an owl figurine from Paris which was inscribed “Hibou”. And so, the band name was born. Michel and his bandmates met in high school, which for them was only about 5 years ago. We chatted a bit about Hibou’s tour, they play with Metric for a few dates and then with Phantogram. This was the band’s first time in Nashville. None of them had heard of Vanderbilt until they met me, but now they know WRVU!

Oddly enough, Michel would not give me his musical influences because he said he doesn’t like to just list a few artists. Everything in the world around him is an influence in some way. I admit I really liked this answer, even though he essentially dodged my question. Michel did say that one musician he would love to meet is Conor Oberst – the singer/guitarist of Bright Eyes. He added that Hibou is a big fan of Lord of the Rings. You heard that right, apparently J.R.R. Tolkien is a major influence on their music. It’s not as strange as you would think, just go listen to Led Zeppelin’s “Ramble On”. Hibou’s LOTR influence is not as explicit, but maybe in the future we can expect themes from the epic trilogy. Who knows.

Something I love about meeting new artists is the nonchalance. Here I was, sitting on a couch next to a musician who I play almost every week on my radio show, but it was such a casual interaction. Each bandmember introduced themselves and shook my hand, then went back to chilling on a couch or playing video games. Musicians can be put on such a pedestal, especially after they’ve gained success. It was nice to meet people who are just, well, people.

Hibou started out in 2013. Now, they’re opening for some well-known indie rock bands. These guys have a bright future, I can feel it. So drop what you’re doing and go listen to their debut album.

Check it out below:

**Next time I’ll talk about Metric. Right now, I’ve got to help my mother make a turkey.