Author’s note: Hello WRVU readers! This is the first iteration of a new series of mine, called “Faces of Music City.” Music-lovers and performers alike know Nashville as the place to be to “make it” in the industry, a “musician’s paradise” so to speak. However, the wonderful individuals that make up this city are rarely given their deserved, individual attention. This series of articles serves to put faces to the names of the songwriters and performers that you may bump into at a casual writer’s round, or at your favorite bars, winning the crowd over. I have thoroughly enjoyed interviewing these new friends of mine, and have learned new things about the Nashville music scene that I never expected to. I hope you enjoy reading about these wonderful musicians! – Adam

When it comes to the natural competition of the Nashville music scene, Stevie Rae Stephens came prepared. From competing at the age of 13 in her hometown in California, to taking the American Idol stage in front of thousands upon thousands of spectators, she is certainly used to watchful eyes and the pressure of comparing yourself to others. Nowadays, Stephens is not so worried about gold medals, instead pushing to spread her message of female empowerment.

As mentioned, Stephens had an early start when it comes to her musical career. As the child of a concert pianist (and the grandchild of another), the constant presence of music led to her singing as early as two years old. From then, she was hooked, singing in public at 5 years old, and entering her first competition at 13. Besides her father, some of her fondest musical influences growing up were musicals, citing A Chorus Line, Les Mis, & Wicked as some of her favorites.

Stevie Rae’s musical career took another step forward when she attended a Berklee College of Music summer program at 15. There, she talked about how her teacher taught her music theory in a new way, “and it was like a switch was flipped in my head.” From then, she took to playing piano, and started writing her own songs the next year. When reflecting on the program, she told me “I felt like I entered as a singer, and left as a musician.”

Perhaps the most transformative period of Stephens’ career came while she was attending CSU Monterey Bay, studying audio engineering. As the only female in her major, she was harassed by a “toxic, abusive, rude as hell” professor who told her that she “wasn’t cut out to be (in school).” This period coincided with another key moment that Stephens mentioned: acting in a play called The Vagina Monologues that spoke of the prevalence of sexual violence. As is fitting with her messages in her songs, she powered through and graduated. Similarly, while studying for her Masters in England, Stevens was a victim of an assault. Instead of letting the incident get to her, she began taking martial arts classes, earning her black belt within two years.

Finally, with years of experience under her (black) belt, Stephens landed in Nashville. I asked her about how the experience was at first, and she commented, “It was really hard. I learned very quickly that nobody here cares what you did outside of Nashville.” Through playing rounds, co-writing with other Nashville songwriters, and networking with venues, Stevie Rae slowly climbed the ladder and began to host her own writer’s rounds. She described this to be a critical move, explaining that these rounds made her “the person to reach out to. I was getting asked to sing background for people, and all of a sudden, I played at the Opry.”

When I asked Stevie Rae how living in Nashville had changed her as a musician, she focused on how her goals changed, stating “I came to love watching other people grow, and I started wanting that for myself more than just ‘succeeding.'”

Stevie Rae is the perfect example of using the past as inspiration, especially when it comes to shaping her sound. She described her music as “femme pop, with messages of empowerment, and a mix of martial arts.” She joked about how her music is a counter to the “bro country” that has developed in Nashville, artists like Florida Georgia Line and Luke Bryan. 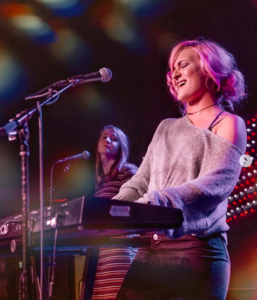 Each song includes some sort of empowering message. In “Queen”, instead of mourning a breakup, Stephens insists that the man of the song tell his future girl how good he had it before her. “Cruel Love” focuses on pushing through difficult times because there’s always a learning experience or something to make them worthwhile.

Stevie Rae left me with a piece of wisdom that I have thought about extensively since speaking with her. “Defining your own success is huge,” she told me, “and for me, success is filling the room you’re in. It doesn’t matter if you’re playing for the smallest bar in town, if people are showing up to listen to you, then you’re doing something right.”

It can be so easy in this town to endlessly compare yourself to other musicians: what gigs they’re playing, how many streams their songs get, even the followers that they have on Instagram. Stevie Rae reminds us to focus on developing ourselves, and while others may be successful, it doesn’t mean that we can’t grow and be successful ourselves.

She has an album release show at The High Watt on 12/12, celebrating her 3rd album, Ladylike

Stevie Rae is also directing a Nashville edition of The Vagina Monologues, which premiers at EXIT-IN on February 16-17.