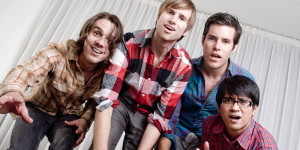 As you might be able to tell by now, I really like lists and I enjoy the number 5. So here’s to a bit of both. Lately I’ve been going through my Itunes library and come across some old favorites; the one’s I’ve been meaning to get into more but haven’t had the time or energy to. But here I am to revive that spirit and to enlighten you all about some albums you may not have heard of, but will be glad that you did.

Australian hip-hop is a hidden gem. Bliss, part of the trio, has lived in America for quite some time, meanwhile Eso is Australian and DJ Izm is Arabian. This diversity of backgrounds can be heard throughout the music. The album’s name is accurately reflective of the tone it gives off. It mostly tells of relatable tales of coming of age, living life to the fullest, and maybe how to best spend an Australian summer. One of my personal favorite songs of all time is “Addicted” and they have an excellent music video to match:

This new wave band from England made it big in the 80s and drew from influential bands of the 60s such as the Kinks, Beach Boys, and Beatles. While some new wave buffs (my dad being one of them) would definitely have listened to a few of their songs, I realized that they were not all that popular. Skylarking is one album of theirs that made them known in America, through fantastic tracks such as “Grass” or “The Meeting Place.” On a much demanded re-issue of the album, the song “Mermaid Smile” was replaced by the more popular song “Dear God,” which you can listen to below.

These guys take happy indie to the next level, but in the most tasteful way possible. More accurately, they have been described as “indie prog.” Saint Motel is a recent band whose first album Voyeur was released in 2012. Every song has fascinating lyrics, some sarcastic, some insightful, but all powerful and catchy. They also make a point of creating fun videos to go along with the majority of their songs, which is definitely true for their hit “Puzzle Pieces.”

I Monster is unlike any group I’ve ever heard. They are an English electronic band that is progressive, psychedelic, experimental, loveable, and intriguing. Many of their songs contain samples and guest appearances, in particular some magnificent female singers. However, much of I Monster’s work has also been sampled, such as their most popular song “Daydream in Blue.” Chances are you have probably heard it somewhere before, so time for something new:

Despite this album’s name, the concept is incredibly dark, yet intriguing. Fans of this album, including myself, tend not to be die-hard Manic Street Preachers fans, since this album is so different and so unique from much of their work. Also, it may have something to do with the fact that their guitarist Richey Edwards, who wrote and recorded the majority of The Holy Bible, went missing shortly after. After listening to the album, his reasons could have varied from either depression, substance abuse, or deeply rooted mental issues that is discussed in the songs. While the topics are not the most pleasant, the music is beautiful and always a pleasure to listen to.