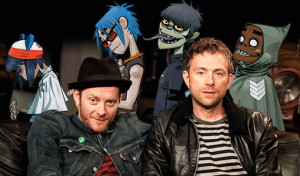 The diverse members of Gorillaz

Despite plenty of success and years of experience, some artists just want to mix things up. This motivation creates what we may call side projects or musical supergroups. Take all the best qualities of similar, or not so similar, musicians, put them in a recording studio, and watch the magic happen. In the past decade or so, five projects in particular have redefined the expectations of musical collaborations. In fact, some of the names may even surprise you.

Even after hearing the familiar voice of Damon Albarn, I found it difficult to believe that the lead singer of popular 90s Britpop band Blur was the genius behind Gorillaz. However, some could argue that Gorillaz is not a real band. It has been labeled as a “virtual” band due to the collaboration with graphic artist Jamie Hewlett and the cartoon characters that comprise the band. The characters are stars in their fictional world and play all the instruments present in the songs. The music is eclectic but mostly focuses on electronica, hip-hop, and some elements of rock. Their self-titled debut sold over seven million copies, meanwhile their following album Demon Days went platinum multiple times in the UK. Currently on indefinite hiatus, it is predicted that they will release an album in the coming years.

Old and new versions of rock music combined to form the funky yet classic sound of Them Crooked Vultures made up of Dave Grohl of The Foo Fighters, Josh Homme of Queens of the Stone Age, and the legendary John Paul Jones of Led Zeppelin. The trio produces a rich and innovative hard rock performance in every song. With the fame of each member, this is the usual composition of bands labeled as “supergroups.” Active from 2009-2010, they managed to release a self-titled album to much critical acclaim and even a Grammy win for their song “New Fang.” Speculation was made with the creation of a second album, which is said to be released on an indefinite date.

This could be the supergroup that some people are surprised to find was actually a mere project at one point. Ben Gibbard from Death Cab for Cutie, Jimmy Tamborello of Dntel, and Jenny Lewis of Rilo Kiley formed the trio. The ultra success of their album Give Up was the record label’s largest hit since Nirvana’s debut. Mostly producing electronica songs, they received favorable praise for their song “Such Great Heights” which was featured in countless advertisements. The band reunited for a tour in 2013 and their album was re-released in the same year with new rare versions.

While they are more of a superduo, Alex Turner of the Arctic Monkeys and Miles Kane of The Rascals create an incredible revival of Britpop in their album The Age of the Understatement. The two sing with heavy accents, emotion, and a unique combination of instruments. Their chemistry is fantastic and after seeing them perform together, one may even guess they were brothers. NME and the Brit Awards have nominated the band for several music awards. Their album reached gold in the UK upon its release in 2008. No word yet on a second album, but interviews indicate it will come in time.

5. Temple of the Dog

Formed in memoriam of Andrew Wood, former lead singer of Mother Love Bone, this grunge supergroup contained stars that embodied the angst and musicality of the early 90s. Started by frontman of Soundgarden Chris Cornell, several members of Pearl Jam including Eddie Vedder joined in. While the typical grunge sound was evident in their one self-titled album, there was interesting experimentation of slower more emotional tunes to honor their fallen friend.  It went platinum and reached #5 in the US shortly after its release in 1991. Since then there have been periodic reunions by some of the members.