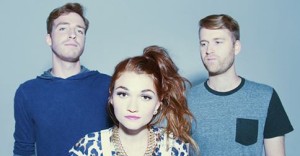 November 9th, 2013. Winter was upon us as potential students scurried around campus knocking leafs around the greek row sidewalks with their weathered, leather boots as they toured a campus and a city that might one day become a home to them. Pretending the brisk Nashville temperatures were still fall conditions, I dressed in a thin long sleeve shirt and prepared for the night ahead of me. We had been looking forward to this day for months. American Authors at one of Nashville’s most unique, bursting of character and quite frankly small venues, The End. Thrilled to leave the lonesome cave I’d created of post break-up tears and cheesy rom coms, otherwise known as my room, my friends and I arrived at the venue minutes before the show facing a crowd of no more than 30 people. Lost in chatter and introductions a voice suddenly broke through the noise and stopped me in my tracks. Who was this girl with the powerhouse vocals strong enough to shatter the thoughts of everyone in the room and draw every eye in this small dive club to her luscious hair, small frame and impeccable style? The voice belonged to Mandy Lee, one third of the trio Misterwives hailing from New York City.

After spending the rest of the night watching the guys try to woo Mandy over, we went home with something greater than a typical post-Saturday night hangover. We had this knowledge of something that was coming and spent the next months watching YouTube videos as their EP and single “Reflections,” which is currently 84 on the Billboard charts and peaked at number 1 on the Billboard Emerging Artist charts, had not yet been released.

In my head, this marked the start of ladies running the alternative and indie rock music scene. In the past year acts such as Chrvches, Tove Lo, Ellie Goulding, Sylvan Esso, Banks, Lorde, First Aid Kit, St. Vincent and Lucius have taken the alt scene and placed themselves right in the middle of it. One thing these singers and bands fronted by women have in common is their ability to showcase their talent not only on record, but also in live performances. After seeing many of the mentioned artists perform at Austin City Limits almost 2 weeks ago, I became an even bigger fan and proponent of these ladies in music. Their talent is not limited to their singing, as they all put on shows complete with climbing the stage, jumping into the audience and radiating energy unlike no other. At Austin City Limits, weekend two, St. Vincent drew a huge crowd to the stage Lorde would play at later in the weekend as she put on a theatrical show filled with heartfelt speeches, blue hair whipping and clothing herself in accessories found on up front audience members. Chvrches and Lucius played in the mix of artists leading sing-a-longs and gaining respect. When the weekend closed with Lorde, bringing one of the largest crowds of the festival, I knew my Spotify playlists would include a little more of these killer tracks, well thought out lyrics and feminine spunk.

Aside from the recent music festivals, some of these artists are just plain good on recording (as I’m sure they are live as well). One of my current favorites is Sylvan Esso as “Coffee” makes for the perfect fall song complete with a soft drum beat intertwined with bells clinking and the mention of coffee – somehow working to help keep me awake in this mid-semester state. For a more singer-songwriter vibe, First Aid Kit just released Stay Gold hailing the single “My Silver Lining” that gives a more country feel from the constant guitar picking, lyrically intimate writing and harmonizing vocals.

With relatable, yet somewhat metaphorical lyrics, Tove Lo has captured the alternative music audience while asserting her dominance on the Hot 100 Billboard charts peaking at number 4 with “Habits (Stay High). Tove Lo reveals that addictions are a real thing in her life but contrary to the drug references in the song, she is addicted to more subtle, legal and arguably more addictive things like love and coffee. The 26-year-old songstress from Sweden has proven not only does she have pipes, but she can also write. Many of her songs have been recorded by other artists in the past two years such as Icona Pop, Girls Aloud, Victoria Justice, Lea Michele and The Saturdays.

Whether it’s late night study sessions or early morning workouts, these ladies produce some of the best music to add to your everyday playlists. Coming out strong for 2014 these girls add to the solid amount of great alt music we have in our hands right now. They leave us asking just one question, who will be next?