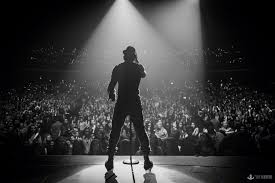 Last night I had the honor of being graced by the presence of Queen Bey herself. Hitting Nashville as part of her Formation World Tour, the show was nothing short of spectacular; there were fireworks, pools of water, and instantaneous costume changes throughout the course of the performance.

Being the cheapskate I am, I sat in the nosebleeds of Nissan Stadium, giving me an eagle-eye’s view of the tiny, fierce, dot that was Beyonce. For probably the cheapest seats in the house at $67, I experienced over two hours of amazement – I oohed and ahhed at the perfectly in sync choreography, the random explosions of lights, the transition clips from Lemonade, and of course, the incredible vocals of Beyonce herself. To say the least, I was thoroughly entertained the entire night (my off-pitch screams to “Partition” on my Snapchat story attest to this).

In stark contrast to this experience, I attended a small Indie Folk concert the Wednesday before Beyonce’s concert. The band, Wild Child, is a small, obscure group from Austin, Texas. Their most popular song, “Pillow Talk,” was one of the first songs I learned on ukulele, and I became acquainted with the rest of the album shortly after. Spotlighting an array of string instruments from cello to baritone ukulele, Wild Child has a genuine, quirky sound that I fell in love with. Every song on each of their three albums, Fools, The Runaround, and Pillow Talk, is uniquely wonderful, a rarity in the surging sea of bands claiming a similar instrumentation and genre.

Last year, I missed not one, but two Wild Child visits to Nashville, so I bought tickets as soon as I heard they were back in town. For $15, I had, with all of the drama and angst, a surreal experience. At one point in the show, Kelsey Wilson, the lead vocalist, actually came down into the small crowd in front of the stage and serenaded us during a slower song, ‘Bridges Burning.’ She instructed us all to sit down, and like eager school children, we acquiesced. Closing my eyes, I could focus on nothing other than Kelsey’s voice and feel the weight of the world give way to a simple melody I had heard a thousand times before.

Was Wild Child better than Beyonce? No. Are the prices of the two shows representative of the time I had? Also no. However, each lent me a completely unique experience and I am wholly grateful to live in a city where such experiences are possible and plentiful.