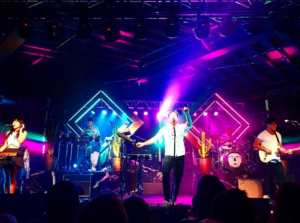 Last Friday, I got the opportunity to see my favorite band, St. Lucia, perform for the third time. When I say favorite band, I mean more along the lines of obsession, so this concert was something that I had been waiting for since the last time that I saw them in November 2014. I saw them open for Foster the People in 2013, and something about their tropical, 80’s-like vibes just got to me, and I fell in love with their colorful, vibrant music.

I got to the concert at Cannery Ballroom right as their opening act, KiND, had begun performing. Although I had never heard of them before, I was incredibly impressed with their music and style. My favorites from their act were “Gloss” and “Run Wild.” KiND employs many different layers to give them a unique, new-wave sound, including a (surprising) saxophone. Overall, I really enjoyed watching them perform and am interested to see where they go from here.

Now on to the main act. When St. Lucia came on, I near was brought to tears. The band kicked the show off with songs “Closer Than This” and “We’ve Got It Wrong.” “We’ve Got It Wrong” is one of my favorites to watch them perform live because they have the audience contribute to the performance by chanting “Don’t go, don’t go away” throughout the entire song, a part that can be heard in the recorded version as well.

In terms of their songs from their new album, Matter, I am not as big of a fan as I am of their first album, When the Night. They eliminated much of the tropical sound that is found on the first album, which disappointed me, and it almost seems as though they were trying too hard on Matter. However, I really liked their live performance of “Home.” The entire song builds up to an incredibly complex instrumental portion at the end, and I was curious to see how it would be performed live. However, the combination of synths, drums, tambourine, and other instruments made this song a truly unique live experience. Along with “Home,” “Dancing On Glass” was great as well.

St. Lucia closed with the song “Elevate.” Although I do like the song a lot, at this point, it has been a bit overplayed and mainstreamed. Although I wish they had chosen a different song to end, I anticipated them to close with their most well-known hit. The song is incredibly energetic, and at the end, they have the entire audience jump as they sing the last chorus.

After the concert, my friends and I stuck around, and we got to meet the band, and they even signed a setlist for me! Needless to say, I was in awe as I stood in-between Jean and Patti, the married couple that started the band, in order to take a picture with them. My friends made fun of me as I attempted to get words out that expressed my love for their music, but instead, I just smiled and sputtered out “thank you.” 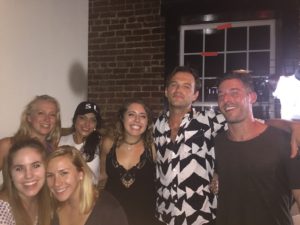 Overall, the concert was everything that I had expected it to be and more. Yes, I may be a bit (okay, very) biased, but with their wide array of instruments and colorful display, St. Lucia truly knows how to put on a great show. They are one of the few bands I have seen that I can genuinely say performs just as well live, if not better than on their recordings. If you have not listened to them, I highly suggest giving them a listen, and maybe you’ll become just as hooked as I am.

P.S. The other day they performed a cover of Toto’s “Africa.” Chills, people, chills.