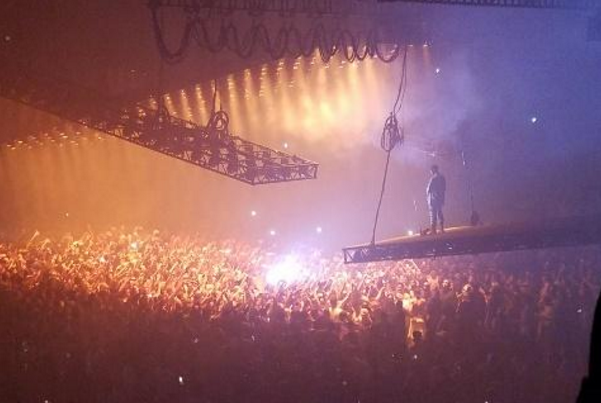 Coming off of the Yeezus tour, it was hard to imagine where Kanye West would take his live performance vision. How do you top a giant mountain, pyrotechnics, models, and even a visit from Jesus? Simple: make the stage fly.

15 feet above the General Admission crowd, Kanye performed a career-spanning 31 song setlist with emphasis on his most recent album, The Life of Pablo. Arriving to the intro of “Father Stretch My Hands,” Kanye slowly flew over the crowd until the beat dropped and the floor morphed into a mosh pit. Lights both above and below the stage lit up the crowd turning them from an audience to an active, visual component of the show. The image of Kanye above a giant, dancing crowd of “worshippers” served as evidence for his “I am a God” statements, even if many not at Bridgestone would disagree.

After “Father…,” Kanye dropped “Famous.” Being the home of Taylor Swift, Nashville was destined to be included in the narrative of the West-Swift feud. Instead of one of his patented “Runaway” rants, Kanye played back the most controversial lyrics of the year three times asking for the crowd of her city to get louder and louder each time. The setlist continued through some of his guest verses and then launched into a string of some of his biggest hits: “Black Skinhead,” “Ni**as in Paris,” and “POWER.” All the while, the stage formed a congregation of fans at or under Kanye’s feet until it tilted or moved again causing a mass movement of people hoping to be just a bit closer to Mr. West and whatever he had to rant about.

As it turned out, Kanye had a lot to rant about on Saturday. Critics of Kanye’s Season 4 fashion show were the initial target of the night’s “Runaway” rant. To a crowd of fans, Kanye opened up about how the critics hurt his feelings and he would find their names and write a song with their names in it as payback. He also discussed how he was the “Tupac of apparel,” “had no control over the price of his clothing,” and had hopes for his fashion line to be available at Walmart. The rant was capped with a declaration of loving to fail and fall flat on his face so that he could inspire us to do dope things just like him.

The rest of the set included classic tracks such as “Jesus Walks” and “Touch the Sky” which caused massive cheers in the crowd. The show culminated in a performance of the grimy, club hit “Fade” set to red lasers over the crowd which was then contrasted with bright lights and “Ultralight Beam.” As the stage flew away and Kirk Franklin preached to the crowd, I fell to my knees along with a few other fans and praised the show we had just seen. After all, it isn’t every day you get to see the self-proclaimed greatest artist of our generation.