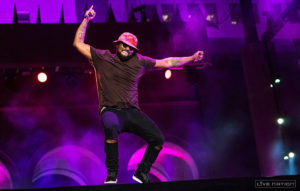 Both shows certainly felt like Marathon: young, rowdy, and not terribly impressive in the acoustics department. But venue aside, both rappers engaged the audience quite well.

Although he came out an hour after his scheduled time (and an hour and a half after open doors), Badass deserves almost as much attention as Schoolboy Q. Call it a slight bias towards the social consciousness and East Coast boom bap revivalism of Badass and the Pro Era collective, but his set seemed to provide a great mix of B4.DA.$$ hits and some older cuts. The 21 year-old rapper opened with “Paper Trail$” followed by “Big Dusty,” both singles off last years aforementioned album. But after these two hits, Badass asked the audience who’d been with him since the beginning, a clear preface to some earlier songs off his 2012 and 2013 mixtapes, 1999 and Summer Knights, respectively. The crowd cheered emphatically as he continued into his older jams: “95 Til Infinity,” “Waves,” and “Hardknock.” From there, the rest of the show continued to mix old and new quite well

As a performer, Badass left little to be desired — at two points in the show he made the crowd form a mosh pit that was suprisingly energetic, and near the end of the show he stopped performing in order to get two beefing audience members to hug it out. After closing with “Devastated,” arguably his biggest hit, Badass left the stage for Schoolboy Q to make his appearance after a short half hour break.

Schoolboy, for his part, came out strong. He opened with “Gangsta,” off 2014’s Oxymoron, and actually stopped near the beginning because he wasn’t satisfied with the crowd’s enthusiasm — after this first song, he even called out an audience member near the front of the crowd for not dancing and told him to go outside if he wasn’t feeling it — though in slightly less soft-spoken terms. In fact, for the first quarter or so of his set, Schoolboy Q seemed continually disappointed in our apparently lackluster energy, and even ended the show by commenting that “y’all started out weak but ended up strong.” It was interesting to see a performer be this blunt with his audience, but you had to wonder if he made the same comment at all his shows. From there, Schoolboy Q continued to fill almost the entire first half of his set with Oxymoron bangers, a decision that seemed unusual given that the tour is named for his new album: “What They Want,” “Break the Bank,” “Groovy Tony,” “Collard Greens” — Schoolboy did a four song run of classics, with the audience getting increasingly hyped until “Collard Greens,” his biggest song to date.

After paying tribute to Oxymoron, Schoolboy in fact went even deeper into his catalog and began to perform several songs off 2012’s Habits and Contradictions. While all of the songs bumped, it was off-putting to see all of his Blank Face songs relegated to the last four songs of his regular set. Additionally, Schoolboy’s brand of loud bangers didn’t lend themselves well to the acoustics of Marathon. Regardless, he did finally get to his new stuff near the very end of his regular set, with “JoHn Muir,” “Dope Dealer,” and “Tookie knows II.”

Near the end of the show, Schoolboy Q claimed that he had signed a contract to be off the stage at 10 pm, and that he simply didn’t care and would keep on performing. Given the late start of the concert, it was easy to see through this as less about Schoolboy’s recklessness and more about a logistical error, which made the comment seem a little disingenuous. This same faux-candor characterized his encore: the on-stage DJ complained that they had cut off Schoolboy’s mic. But then, miraculously, he appeared onstage 10 seconds later to perform a 3 song encore of “Man of the Year,” (yet another Oxymoron cut), “Free Lunch,” for which Knoxville-native Isaiah Rashad performed, and “THat Part.”

Overall, the $40 price tag for the night was warranted primarily through the inclusion of Joey Badass. Schoolboy Q’s set, while rousing and infectiously danceable, seemed lacking in new material and perhaps slightly cynical in the way he communicated with the audience. While still a great night, those who wanted a fresh Schoolboy Q that didn’t rely on past hits may have been slightly disappointed.