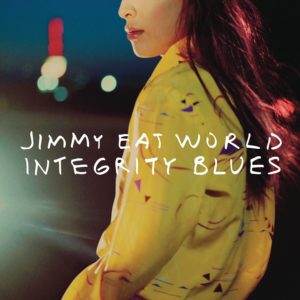 With each crappy Jimmy Eat World album released after Futures, I’ve claimed to have given up on this band.  But deep down, I always knew I would never truly be able to abandon the most quintessential emo band of all time.  And I’m glad I didn’t, because their latest album, Integrity Blues (released October 21st) is honestly pretty breathtaking.

Integrity Blues shows Jimmy Eat World at their best; the album serves as an agent to liberate Jim Adkins (lead singer & song writer) from all the heartbreak and pain he wrote about in his earlier albums.

The angelic, resonant opener “You With Me” features sweeping, mellow guitar sounds and pretty good (albeit depressing) lyrics once you get past the kind of creepy choir-like intro.  Track 2, “Sure and Certain,” is another one of those upbeat songs with bleak lyrics: “Sure and certain/ Wander ’til we’re old/ Lost and lurking/ Wonder ’til we’re cold.”

About halfway through the album is the song “Pass the Baby,” which I think is a pretty weird title but whatever.  It’s mainly spoken word and has a sort of spooky vibe, which I could get into but it just does not work with Jim Adkins’ voice. All the other songs are great though!

This is probably an unpopular opinion, but I think after such an incredible album, the band needs to just break up.  Like, just stop.  Quit while you’re ahead.  With 23 years of existence, the band is older than most of us, and somehow they are still making beautiful songs . They finally underwent the evolution they needed to after a decade of total crap, and I for one think if they broke up now, they’d be coming out on top.  They’ve had a good run, but I doubt they can keep up with the pace they’ve set for themselves with this latest album.