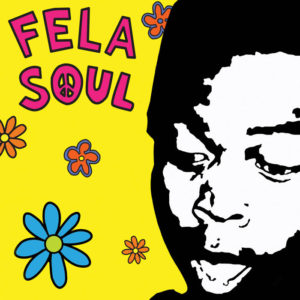 In the world of hip-hop, producer mashups are hardly rare. Danger Mouse first made a name for himself in 2004 with The Grey Album, which combined the verses of Jay-Z’s The Black Album with the instrumentals of The Beatles’ The White Album. Tom Caruana did the same with Magical Mystery Tour and Enter the Wu-Tang (36 Chambers), deeming it Enter the Magical Mystery Chambers. And the subgenre of plunderphonics revolves around the overlaying of samples over hip-hop verses, leading to classics like Girl Talk’s Night Ripper.

Records like The Grey Album thrive on the relative musical disparity between their sources as well as the popularity of these sources, blending famous rap verses and rock hooks in unique ways to create entirely new sounds. But for the past six years, Nashville producer Amerigo Gazaway has been reexamining the mashup with artists who share similar artistic and political sensibilities, and who aren’t necessarily household names, allowing his sources to build off each other in a beautiful compound effect. Enter: 2011’s Fela Soul.

The “Fela” in Fela Soul refers to Nigerian saxophonist and political icon Fela Kuti, who spawned the genre known as Afrobeat in the late 1960s, which melded jazz instrumentation with African rhythms and chanted vocals. The “Soul,” of course, refers to golden-age hip-hop group De La Soul, themselves highly influenced by jazz and politically-charged lyrics. Put them together, and you get a match made in heaven: ten thoroughly saxy songs that span De La Soul’s entire catalog and superimpose these lyrics over the groovy, vibrant horn sections of Fela.

It’s a natural fit, and, I would argue, far more effective than Danger Mouse’s early experimentation of the same vein. While albums like The Grey Album are undoubtedly novel, the familiarity of their source material breaks any illusion of cohesiveness and reduces an original concept to what feels like a clever gimmick: “Helter Skelter” and “99 Problems” combine into something unique, but not something that feels stronger than its constituent parts. In contrast, the samples of Fela over De La Soul imbue these songs with an infectiously jazzy spirit, and the political righteousness of both artists contributes to each of them in creating a musical atmosphere both artists lack on their own.

Not to mention, as standalone songs, these tracks are good. The album opens with “Stakes Is High,” featuring a minimalist sax hook that combines with a hip-hop drum beat to literally embody the spirit of jazz rap. Later “Roc Co.Kane Flow” opens with a sample of Fela Kuti explaining the revolutionary potential of music, and ends with an 3o-second outro of African drums, chanting, and horns. In between, MF Doom exhibits his lyrical density over repeated looping of a Fela sax solo. But perhaps the highlight of the album is “Feel Good Inc.,” a song which originally featured De La Soul in a single midsong verse. Gazaway combines the Afrobeat drum rhythms and horn choruses of Fela with Damon Albarn’s lyrics into something truly special.

Fela Soul isn’t Gazaway’s only mashup record — in 2012, he released Bizarre Tribe: A Quest to the Pharcyde, which combined hip-hop groups A Tribe Called Quest and The Pharcyde, and in 2014 Yasiin Gaye, which combined Yasiin Bey (otherwise known as Mos Def) with Marvin Gaye. As with Fela Soul, these records operate off of the musical similarities between the source artists to create something not entirely new, but much more complete, than other mashups.

For me, Fela Soul shines as an example of unique hip-hop that doesn’t rely on familiarity or gimmicks, and has in mind both faithfulness to its source material and the desire to create something synergistic, bigger and better. Not to mention, it stands as proof that at least in some capacity, Nashville hip-hop is in fact an existent entity, even if only in the form of sample-based production. If you ever want to discover an artist or two you might not be familiar with, or else hear something inspired in the realm of hip-hop production, check out Amerigo Gazaway’s Fela Soul.