More often than not, artists offer anecdotes of tour life, musical inspiration, or other background information about their work between songs. Both Julia Jacklin and Christian Lee Huston practiced this tactic during their Mercy Lounge sets last week.

Hutson, a singer-songwriter from LA who frequents the Nashville venue circuits, began his opening set by sharing a story about a recent encounter with a stranger. He was out one day and someone said, “Jeffrey Dahmer’s looking better than you these days.” It’s true, Hutson’s blond hair does fall around the face in a somewhat suspicious manner. Still, his impenetrable demeanor made his music feel all the more vulnerable. Though he has only formally released one single, renditions of “I Just Can’t Fucking Do It Anymore” and “I Have To Keep You Down” felt like a secret from the front of the small gathering of people who migrated from the bar. He sang with his head down for a majority of the set but spoke his monologues directly to the audience, perhaps searching for a response. When individual voices spoke back, he answered them. When I sneezed, he blessed me. At the conclusion of the set, he played the recognizable and wistfully mournful “Northsiders,” and asked us if he really did look like Dahmer. A cluster at the front of the stage pulled up a picture on their phones and held it next to him for comparison. His humor was surprising given the content of his music but possessed the same genuine quality and thoughtful reflection.

Self-love and -empowerment superstar Julia Jacklin possessed all the humble tenderness expected of an artist with such a title. She came on to the stage, unassuming and almost bashful, and began playing “Body” from her recent album Crushing. Jacklin’s lyrics captivated the crowd and, during her long pause in the middle of “Leadlight,” no one made a sound. With closed eyes, she moved into earlier works from her 2016 LP Don’t Let the Kids Win and shared a story about a cover she did of a song after learning it from a boy. Each anecdote between songs came from a place of such pure humility that it sometimes read as embarrassment, which made her seem more likable and human.

There is something so raw and genuine about her delivery. With her soft rasp and vulnerable lyrics, Julia Jacklin could sing lullabies to the next generation. I can imagine being carried off to sleep via the righteous tune of “Head Alone,” an anthem of bodily autonomy. She discusses difficult topics with ease using digestible language and accessible melodies. It is rare to find a musician so capable of tapping into the thrum of a global feeling as successfully as Jacklin does on her album Crushing. “Pressure to Party,” which served as the set’s penultimate song, rang through Mercy Lounge energetically as captive onlookers celebrated their collective desire to stay home rather than face other people. 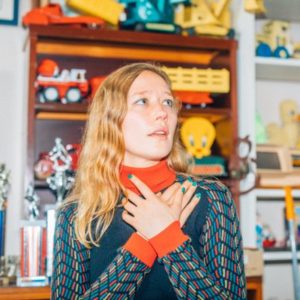 Somehow, Jacklin’s music has the power to do the opposite of what it claims. There is unity in loneliness and the tendency to isolate but, when artists come through town, they have the opportunity to create communities. In an interview with Hannah Read of Lomelda, For the Rabbits asked her why she made music. Defying expectations, Read said that it was for friendship.