“This album is all about how it’s okay to not be okay, and as an Enneagram type 7, that’s been really hard for me.” Surrounded by her friends, co-writers, and biggest fans, Kalie Shorr told us plain and simple who she is, and what her new album, Open Book, is all about.

As the car pulled up to Club Roar, we weren’t even sure we were in the right place until we saw other people in line. Tucked away and off the main roads of Berry Hill, Club Roar is both a recording studio and intimate venue. Looking around confirmed that this building is a creative space, featuring a life-size sasquatch perched above the stage, chandeliers in every room, and even an original Andy Warhol painting.

As soon as the crowd settled, Shorr and her band appeared on stage, wasting no time jumping into her opening track, “Too Much to Say.” With a combination of ear-pounding drums, entrancing steel guitar, and raw lyrics, Shorr seamlessly intertwined the musicality of rock with the intricacies of traditional country. 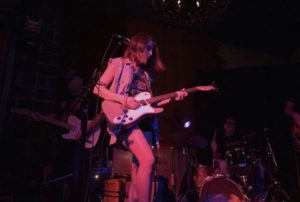 All of the songs were prefaced by their origin story. A nearly silent crowd looked on as Shorr described “Escape” and how “it’s the kind of song that can only be written drunk, on the floor, with your best friend.” A single cheer stood out from the rest of the crowd, as said best friend and co-writer Candi Carpenter celebrated the long-awaited release of this album.  The song pulls no punches, name dropping a “POS named Phil” and her brother, whose “kryptonite comes in a twelve-pack,” among others. She introduced “Big Houses” by telling the story of how her mother and her would drive around the neighborhood and talk about what life would be like to live in a mansion.

Shorr ended the show with a few more lighthearted and celebratory songs. Despite releasing the single only a week before the album’s release, the crowd shouted along Shorr during “F U Forever,” a song that celebrates getting out of a toxic relationship and being straight up with the person who hurt you. Shorr ended with “Lullaby” which encapsulated the night and the meaning of the album perfectly by encouraging the listeners to acknowledge the difficult parts of life, but to not let them shape who you are.

We got the chance to talk to Shorr afterwards, but truthfully, I was a bit starstruck. Her lyrics speak to relatable issues and she uses her platform to assure listeners that it’s normal and perfectly okay to struggle. While some artists prefer to preach about what it’s like to be famous and rich, Kalie Shorr tells us that she’s human just like us, one who loves her enneagram. 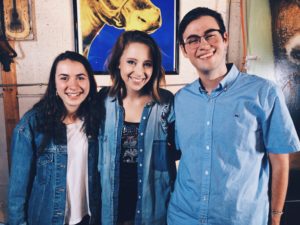 With Kalie Shorr in front of an original Andy Warhol painting