I’ve been to Live on the Green three times in all. My first time was last year as a freshman and my was it wonderful. Naturally, I returned this year and went to the first show I could – Head and the Heart. However, I was most excited for Cage the Elephant. While I imagined myself watching from a spot close to the barriers, carrying crowd surfers, and fighting for room to breath, I took on a very different perspective as a photographer backstage instead. 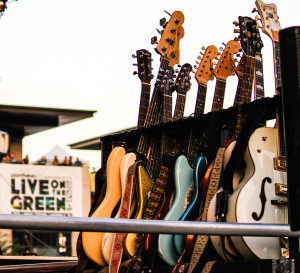 Live on the Green through a different lens

The opportunity arose through the Vanderbilt Hustler. I spent most of my summer exploring the world of photography and was interested in joining the photo staff for the school newspaper. Upon seeing the availability of shooting (taking photos) Live on the Green the Thursday Cage the Elephant was playing, I immediately volunteered. And just like that, I had backstage passes to what was bound to be an incredible show.

One fun fact I learned about concert photography is that in most cases, once a set goes on photographers are only allowed to stay in the “pit” (the space between the barriers and the stage) for the first three songs until they are escorted out. I got there just in time for Johnnyswim. One thing that I noticed as a photographer was the movement of the musicians. We are usually so focused on the sound they make, but their stage presence is so incredibly important. I suppose that some musicians make it look natural, but I could tell that they are particular in how they stand, hold their instruments, and where they move.

Delta Spirit, the next band up, was a rock band and adhered to their own form of rhythm. They were a bit more show-y than the acoustic Johnnyswim and the lighting and motion reflected this. As the night went on, photographing the singers became more difficult as night fell and lighting became more difficult. However, I noticed that the most striking pictures I took were of the people in motion – frozen in time with guitar in hand or holding that high note on the mic. It became all the more magical.

Finally, Cage the Elephant went on. As fantastic as they are live, they were a nightmare to shoot. One could say that the better the stage presence of a band (engaging with the audience, moving around the stage, immersing themselves in the music) the more difficult they are to photograph. The lead singer was all over the place and ended up crowd surfing, jumping on the guitarist, and going through various stages of stripping. But wow what a show. The energy was like nothing I had ever seen. Having to capture these moments of insanity and excitement made me realize just how much work goes into performance. Playing music is one thing, but stealing the spotlight is a gift that so few people possess. 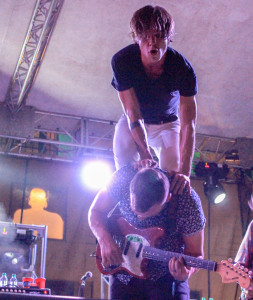 The craziness that ensued.

Moral of the story is next time you’re at a concert, don’t just pay attention to the sounds. You could do that on your own computer or iPod. Instead, make sure to also focus on their expressions, their movement along to their own music, and how they react to a swarm of people chanting their name. What you see may surprise you. 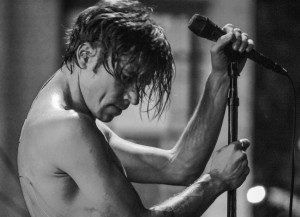 My favorite shot of the night