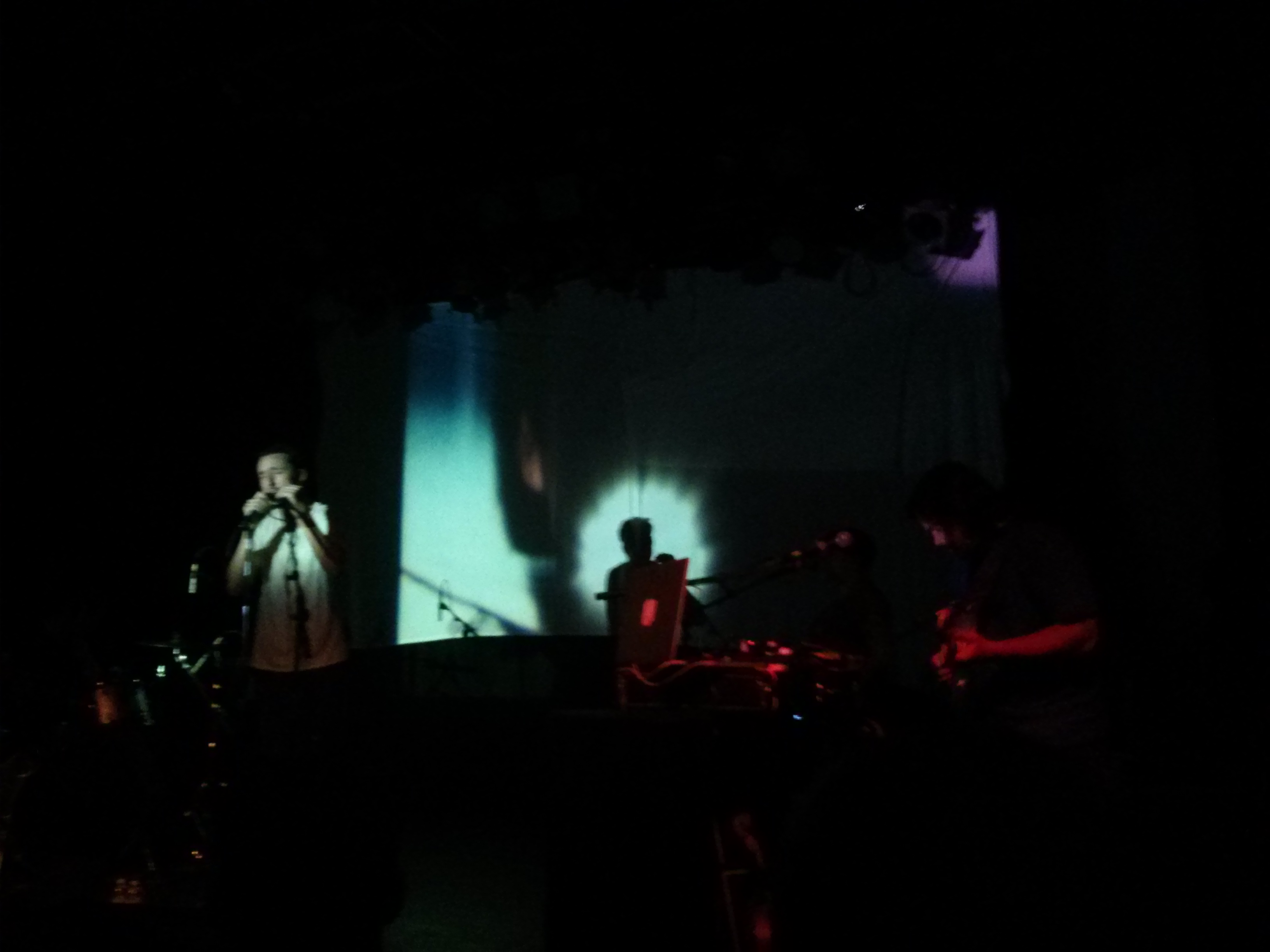 How to Dress Well performs in Nashville.

By most metrics, How to Dress Well still has a lot of room to grow in the music industry. This past Tuesday, singer/songwriter Tom Krell’s first appearance in Nashville meant a twelve dollar Tuesday show at Exit/In that maybe half sold out. The intimate crowd size and locale seemed much more befitting to How to Dress Well’s early lo-fi work than to 2014’s immaculately produced “What Is The Heart?” While his music is influential to similar indie-R&B peers like The Weeknd and Frank Ocean, Krell is several orders of magnitude behind the breakout recognition those two have enjoyed. Critical appeal has grown with each full-length release, and so has both the production quality and amount of potential breakthrough singles, which makes it hard to say why Tom Krell has yet to experience a higher level of cultural significance.

After opening expressively with “A Power” from “What is This Heart?”, Krell moves into “Face Again”, off the same album. Especially live, this song is absolutely saturated with sub-bass, with pitched down and chopped-up vocals weaving in and out of a forceful, menacing pop tune. The crowd loves the performance, which is as darkly addictive as the best songs on a Weeknd mixtape. From there, the band quickly switches gears with “Repeat Pleasure”, a gleaming contrast to the previous song. The band replicates the warm guitar and tropical drum patterns perfectly, and Krell’s silky smooth vocals are front and center.

Outside and in, the walls of Exit/In are covered with an impressive roster of past performers. R.E.M., Talking Heads, Tom Petty, The Allman Brothers, Modest Mouse, The Ramones. This is a venue with a resume filled with examples of being ahead of the curve on timeless artists. But how many who performed here have been all but forgotten? As seen on the signboard posted outside, surrounding How to Dress Well’s Tuesday performance are anonymous presences such as The Daily Howl, Earphunk, and a Beastie Boys tribute band. 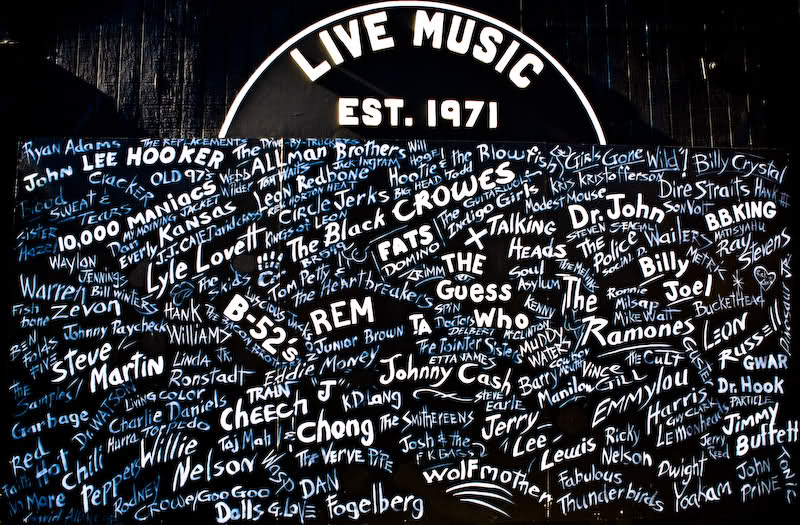 Exit/In’s board of influential past performers

How to Dress Well’s fourth song of the evening is “Cold Nites”, a dense, dark, haunting single from 2012 album Total Loss. This is one of only three song choices for the night not from the new release. Conspicuously absent from the setlist is the other Total Loss single “& It Was U”, a minor hit which stands as the group’s largest. Instead, Krell and friends replace it with “Very Best Friend”, another 2014 track. This heartwarming song has several crowd members in my vicinity dancing and swinging arms over each other’s shoulders, pleased with the song’s positive lyrics about friendship and love. Interestingly, the band chooses to add a wall of sound outro to the song, giving an ominous undercurrent to one of the few HTDW songs that lack one. “Childhood Faith in Love” is to follow, a lyrical and emotional standout also from “What is this Heart?” 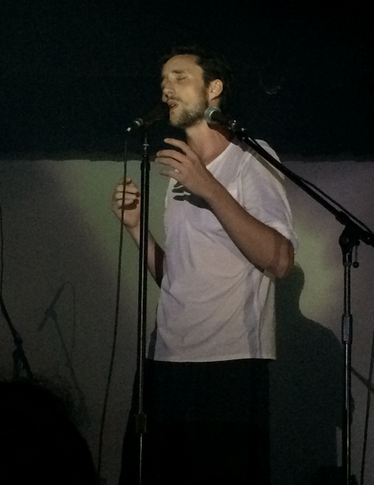 Tom Krell shows off a way to dress yourself.

Tom Krell doesn’t look like your typical R&B star by any means. He’s a skinny white guy who wears Nike athletic shorts, flyknit sneakers, and a pocket tee to his Nashville show. To me, he embodies the indie community’s continuing shift from rock and its subcategories to a wider range of influences, especially modern R&B, electronic, and hip-hop. When he isn’t performing, he is incredibly laid-back to the point of being unenthusiastic. He chuckles at the divey-ness of the venue, pointing out to the crowd that if they need the bathroom it is behind a curtain up there on stage. Later in the show, he asks into the mic if anyone could bring him a beer, and when someone does he seems amused by his minor importance at that moment.

“Suicide Dream 1” is the lone cut from 2010’s lo-fi leftfield release Love Remains, but here the song is updated sonically to fit alongside the plush, clear productions of Krell’s last two albums. This is a benefit, bringing the poignant lyrical and vocal performance to the forefront. Another 2014 track, “Precious Love” is next, which to me pales next to stronger tracks. “Set it Right” is the last in the trio of non-2014 songs, which works as the night’s emotional climax like it did on Total Loss. During the song’s outro, Krell starts singing the chorus of Rich Gang’s “Lifestyle”, an apt shoutout to the modern hip-hop that influences Krell and he indirectly influences. “Words I Don’t Remember” closes the evening as an excellent summation of the How to Dress Well experience. The song starts with Krell’s slow and sensitive vocals, until the touring band joins for a satisfying palette of full sound and expression.

Despite a performance that succeeds both technically and emotionally, the night ends on a sour note. After just ten songs in around forty minutes, the band is finished. The crowd waits around yelling for an encore but doesn’t get one, which is the music world’s equivalent of not tipping in a restaurant. Unfortunately this kind of apathetic behavior falls right in line with the rest of the persona Tom Krell has chosen to inhabit. He’s passionate about his music and has proven himself as both a songwriter and performer, but he shows little regard for many of the other little details that people notice. Several strange moments have already been mentioned during this review, but there are more. He kills any hype built by opener Nite Jewel by playing Sun Kil Moon’s downcast folk slow-burner Benji during the interlude between the two acts. It’s easy to interpret this choice as even more passive-aggressive, since this comes soon after an interview where Krell supports Mark Kozelek’s recent anti-audience outburst at a Sun Kil Moon show.

Honestly, little things like not coming back for an encore, making fun of the venue, and criticizing other musical artists on twitter leaves a bad taste in the mouths of both current and potential fans. For what was such a strong, enjoyable show, it’s a shame that many people including myself left that night thinking about how the band played for only half an hour and promptly headed out. It’s possible this kind of behavior sheds light on the disconnect between How to Dress Well’s critical track record and the relatively low commercial impact. If How to Dress Well is to join the numerous legends that started out at Exit/In and are now immortalized on its walls, an attitude check might be in order. Could be the difference between having a few critically acclaimed cult classic albums and finally bringing his infectious brand of R&B to a widespread audience.