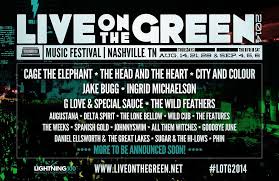 Boasting crowds approaching 20,000 each week, Nashville prides itself in having one of the best free music festivals in the country. You heard me right, free. Lightning 100, the only local independent radio station, brings in the best live acts for four Thursday nights full of food, fun and music then continues the party the last weekend by extending this Thursday night show into a whole weekend festival spicing up our Friday and Saturday. This year the lineup was better than ever with bigger bands and the same long sets. All of these Thursdays and weekend performances add up to 22 live sets by Cage the Elephant, The Head and the Heart, Capital Cities, Ingrid Michaelson, City and Colour, Jake Bugg, G. Love and Special Sauce, The Wild Feathers, Augustana, Delta Spirit, The Lone Bellow, Wild Cub, The Features, The Weeks, Spanish Gold, Johnnyswim, LP, All Them Witches, Goodbye June, Daniel Ellsworth and the Great Lakes, Sugar and the Hi-Lows and Phin.

One of the unique features about Live on the Green is the focus on local music as well as national acts. The most impressive local act I saw was The Lone Bellow.  In the days following the last show of Live On The Green this season, when LOTG conversation would come up people would say, “Dude, The Lone Bellow on Saturday was so good! Did you hear “Green Eyes and a Heart of Gold.’” It being one of my favorite songs by the band I shared their enthusiasm as we went on to talk about their stage presence, the mind-blowing harmonies and overall great show they put on. Rising in popularity, and in our hearts – The Lone Bellow gained my vote for best local act at Live on the Green.

Although the music plays a huge factor, some bands put on a heck of a show just by the energy they bring. Cage the Elephant was hands down the most thrilling show to be a part of. Playing a mix of classic Cage songs like “Ain’t No Rest For The Wicked” and “Back Against The Wall” along with newer songs like “Spiderhead,” they made this a night to remember for the first time Live on the Green’ers along with alumni. By the end of the night Matt Shultz, the lead singer, had stripped off his shirt and dived into the crowd. His small frame allowed for the crowd to toss him around as he continued to sing. “What a show” people would say “What a show.”

Then there are those bands whose lyrics speak to you as if they are whispering thoughts into your ear for just you to hear. The Head and the Heart created a heartfelt sing-a-long playing crowd favorites “Lost in my Mind,” “Shake” and “Another Story.” Smiles covered the attendees’ faces as the mellowed out the crowd and brought cheer to this Thursday night.  They really hit home starting out singing “A year from now we’ll all be gone/ All our friends will move away? And they’re goin’ to better places? But our friends will be gone away,” the lyrics to “Rivers and Road,” a song so relevant to the lives of young adults leaving from high school, college or cities. The Head and the Heart’s talent was evident as they were raved about for days following.

So there it is, my favorite local act, performance and musical talent of Live On The Green 2014. Quick shout out to Ingrid Michaelson for playing her first show back after her mom’s death in Nashville. Glad we could be welcoming and comforting enough to hold that special honor. We love you Ingrid.

Until next year, Live On The Green