Called “SXSW’s grungy little sister” by Entertainment Weekly, Savannah Stopover is a hidden gem for festival-goers. In fact, EW perfectly describes this small city fest, as it was conceptualized eight years ago to attract touring artists who were on their way to the colossal South by Southwest Music Festival in Austin, TX. Savannah Stopover brings in a large spectrum of artists, from the local bands to the Grammy-winners, but gives them all the same southern welcome.

Different from many other music festivals, the Stopover venue is actually split into seven different locations throughout the historic district. You can catch a show in a club, a dive bar, or even a church! These smaller venues allow for a much more intimate connection between the artists and the patrons. Since these establishments don’t have a strict “backstage” area, artists would typically hang out in the crowd after their set to listen to other groups perform, giving the fans an opportunity to meet and mingle with them. Quite different from the normal festival experience!

While Savannah Stopover brings in some big names every year, such as St. Lucia, Future Islands, and this year’s of Montreal, their selection of supporting acts is quite impressive. Not even the early-afternoon shows sounded like opener sets. Each group that came on stage rocked out like they were the headliner, and left the stage with a fan base that matched the big artists of the weekend. Here are some brief highlights of up-and-coming festival headliners: 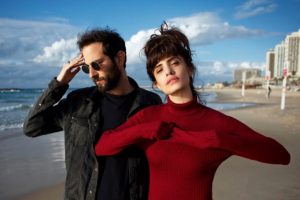 Lola Marsh, a duo from Tel-Aviv, was the first to play at the Trinity United Methodist Church on Friday. You could not ask for a tougher act to follow. Frontwoman Yael Shoshana Cohen’s deep, exotic voice melds perfectly with the textures beneath her, creating an enchanting quality in their mellow tunes. A woman near me listening to the set said, “That’s not songwriting. That’s composing.” You can find their debut album Remember Roses on Spotify. My favorite track off the album is “She’s A Rainbow.” But their soon-to-be-chart-topper is “Wishing Girl,” complete with ukulele and whistling—staples of an indie hit. (Don’t worry, they do it with taste.) It’s wonderfully catchy! 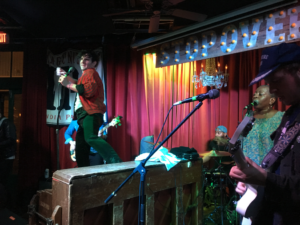 Low Cut Connie is the revival of the classic Rock ‘n’ Roll sounds of the early 50s. And their image reflects the style of their music—leather jackets, greased-back hair, vintage Gretsch guitars, and the same beat-up piano on every stop of their tour (her name is Shondra). Truly a refreshing group to listen to—check out their appropriately named “Revolution Rock ‘n’ Roll.”

You can catch Low Cut Connie at Bonnaroo Music and Arts Festival 2018! If you are lucky enough to see them live, you will undoubtedly enjoy frontman Adam Weiner’s eccentric stage performance, as he pulls out his chest hairs to throw at the crowd and rips his wife-beater in half for the final number. 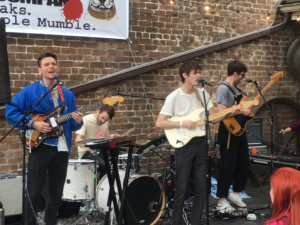 Another crowd favorite, Plastic Picnic’s music is a love affair with the synth—they incorporate blocked synth chords and riffs in nearly all of their refrains, adding an electronic texture that you didn’t know you’ve been craving. If you wish Vampire Weekend had more 80s synth, this is the group for you.

Plastic Picnic will be at The 5 Spot here in Nashville this Wednesday, March 21st!

I was fortunate enough to meet all three of these wonderful groups—not only were they excellent performers and musicians, but they were also incredibly kind people. No other music festival I have attended has encouraged such close interactions between the fans and the artists. If you’re looking to make new friends that will soon be in higher places, look no further than Savannah Stopover.