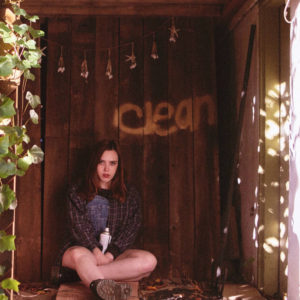 Similar to many indie rock artists of the modern age, Soccer Mommy began her career by sharing her musical talents on Bandcamp. Catching buzz for her self-described “chill but kinda sad” sound, Fat Possum Records released Collection in 2017, a polished recording of eight reflective tracks. A highlight from Collection, though on the more melancholic side of the spectrum, is “3AM at a Party,” which features an acoustic guitar and floaty vocals as she grieves unrequited love:

With a unique, endearingly flat, hazy singing voice and acute lyrical sense, her rippling guitar-filled songs continue to be conversational and heart-wrenching on Clean. Perhaps this is cynical, but it is hard not to imagine my own life continuing to follow Clean as an audio diary, though it is because Soccer Mommy’s new lyrics are tender, wild, and speak to an insecurity emblematic of my generation; she has the innate ability to make sadness empowering.

The opening track, “Still Clean,” describes hopeless feelings post-abandonment through electric guitar and soft synths. The chorus is simple yet impactful — eight words repeated four times: “Only what you wanted for a little while.” It is a great introduction for the album as it is balances the old and new sound. The album then fiercely transitions into the eccentric “Cool,” in which Soccer Mommy idolizes a confident character named Mary, a “stoner girl” with a “heart of coal” who “won’t ever love no boy.” The song is textured with a discordant guitar versus a poppier chorus. Riding on the moxie of the last track, “Your Dog,” is the album’s ultimate fire. Over a snarling guitar, she cries out against the injustices of a manipulative, emotionally abusive relationship:

Powerful in its consciousness of the psychological tolls of unhealthy relationships and ownership, the song simultaneously tears it apart and resists.

Though equally raw in lyricism, occasional sections of the album are much softer in instrumentation, with slower, quieter strums on “Flaw,” “Blossom (Wasting My Time),” and “Wildflowers.” The latter, however, is an exploration of self-definition so beautifully articulated through a metaphor of growth and development, it effectively leaves the listener emotional:

Refreshingly, “Last Girl,” “Skin,” and “Scorpio Rising,” return the album to its energized melodies. Insecure lyrics against spirited guitar on “Last Girl” make it an ideal jam whilst wallowing in the essence of self-doubt and comparison. Delivering one of the most personally relatable lyrics of 2018, “She’s the sun in your cold world and / I am just a dying flower / I don’t hold the summer in my eyes,” Soccer Mommy highlights conflicting feelings layered with jealousy, fascination and self-deprecation. Beginning with deceptively simple instrumentation and lyrics,”Scorpio Rising” then progresses into a powerful, climactic song describing a stellar inability to relinquish a fleeting lover. With lyrics like “I’m just a victim of changing planets / My scorpio rising and my parents,” the song admits defeat with a bold, heavy tone.

Clean is an incredible, emotionally mature debut album. Its title intrigues me; it is an ode to healing, to navigating pain and toxicity to make yourself feel whole again. Despite the sorrowful themes, listening to Clean does not make you feel drained — it makes you feel heard.