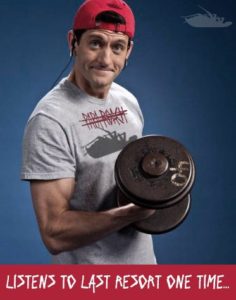 Two momentous things occurred on Friday, March 24: the first was that Paul Ryan’s dream of repealing Obamacare likely died forever; the second, almost equally exciting event, was the birth of #RoachGate, an Internet rumor alleging that Paul Ryan is secretly an angsty emo kid who still listens to Papa Roach.

The rumors began with a joke made by Justin Halpern–a pretty good joke, if you ask me.  Here’s a quick synopsis of the backstory: last Friday, Paul Ryan faced a crushing loss and had to pull his bill, American Health Care Act (aka Republicare) from legislation once it became obvious that the requisite number of votes was not going to be obtained.  Ryan left the White House upset and embarrassed, though the ultimate embarrassment was yet to come.

Justin Halpern, a comedian, Twitter master, and producer, wrote about Ryan’s loss in a fake New York Times piece, which subsequently went viral.  The piece ended with this beautifully executed climax: “It was a stunning failure for Paul Ryan. He exited the White House in defeat and took no questions as he stepped into his black SUV. Within moments, the muffled sounds of Papa Roach’s ‘Last Resort’ were heard blaring from inside the car as it drove away.”  This legitimate example of “fake news” took the Internet by storm, and by the time Halpern clarified that it was a joke, Papa Roach was already trending on Twitter.

“Last Resort” is the first single from Infest, Papa Roach’s second album, released in 2000.  This quintessential punk-emo song is a cry for help, very obviously about suicide.  It achieved mainstream success, topping the Modern Rock Tracks chart and even reaching #57 on the Billboard Hot 100 chart in December 2000. Lyrics from this song that likely resonated with Paul Ryan following his defeat could have been: “I’m losing my sight / Losing my mind / Wish somebody would tell me I’m fine,” or “Feeding on chaos / And living in sin / Downward spiral where do I begin?” or “Nothing’s alright / Nothing is fine / I’m running and I’m crying / I’m crying / I’m crying / I’m crying / I’m crying.”

Papa Roach weighed in with their own casual roast at Ryan, which they quickly followed up with, “But seriously ‘Last Resort’ was written about suicide, if anyone is feeling defeated get help at @800273TALK.” If any of y’all are interested, Papa Roach actually has a new album coming out mid-May called Crooked Teeth (not to be confused with Death Cab For Cutie’s song with the same title).  I wonder if Paul Ryan will endorse it.