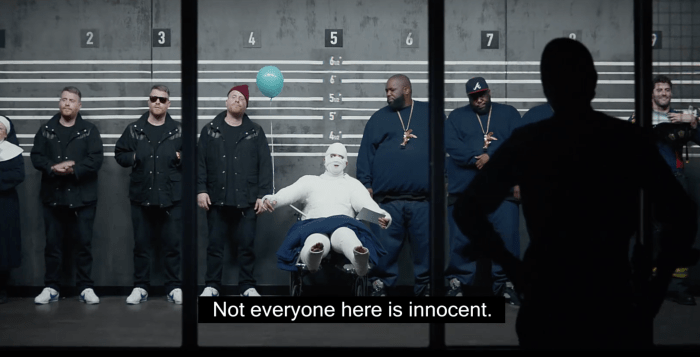 (via “Legend Has It” music video by Run the Jewels)

Politics! We all love (or love to hate) talking about it. Undeniably, we are living in a time where almost everyone is paying attention to our political climate. Which, in turn, also brings out a lot of opinions. Run the Jewels are no stranger to politics. Killer Mike was a strong endorser of Senator Bernie Sanders in the presidential primaries, even speaking at rallies. Tracks like “Talk to Me” are laden with political talk (“went to war with the Devil and Shaytan/He wore a bad toupee and a spray tan”). Their music videos have even embraced this talk wholeheartedly.

Run the Jewels dropped the “Legend Has It” music video this week. While it is one of Run The Jewels 3’s least political tracks (“I got a unicorn horn for a…”), the music video makes up for that. Stuck in a police line tripping on acid, the group is singled out because of their careers while cops, a child, and a nun are set free. Surprise! It was actually all of the perceived innocents that should’ve been punished. The braggado lyrics serve as a sharp contrast to the difficulty of perceived guilt in our justice system today that puts the rappers in their less than brag-worthy situation.

“Early” feeds from the already political track to animate the criminalization of marijuana that leads to a story of the gruesome reality of police brutality towards those that are black. Killer Mike brings the pain of all those affected though his voice, while El-P expertly depicts feeling at a loss due to our current social climate.

While this is solely a Killer Mike track, it completely earns its spot on this list. With the incredible admiration of Ronald Reagan with many alive today, the phrase “I’m glad Reagan dead” shocks at the first listen. Addressing trading arms for hostages, Oliver North introducing cocaine to black communities, and the war on drugs’ true consequences, Killer Mike lays out what the Reagan administration meant for him and his general distrust of our past and current leaders’ intentions.

Killer Mike owns a barber shop in Atlanta and had the opportunity to interview Bernie Sanders while sitting in it. Illustrating the importance of black business, Bernie and Killer Mike touch on a few of the big issues affecting our world today.

Run the Jewels has shown themselves to be a powerhouse of social commentary. They have also shown how musicians can use their status to promote change and open dialogues that are often uncomfortable. Artists have always been in a powerful place to advocate for social change, and with artists like Killer Mike and El-P, we might just accomplish it.