Recently, a friend of mine has gotten me into Viet Cong, the Canadian post-punk band that just released their self-titled debut album in January.  So when I stayed with that same friend in Los Angeles over Spring Break, I couldn’t pass up the opportunity to see the band while they were in town at one of LA’s fine venues, The Echoplex, last Friday night.  And what a show it was.  I decided to spontaneously purchase my ticket the same day as the show, and I couldn’t have made a better decision on how to spend my last night in LA. 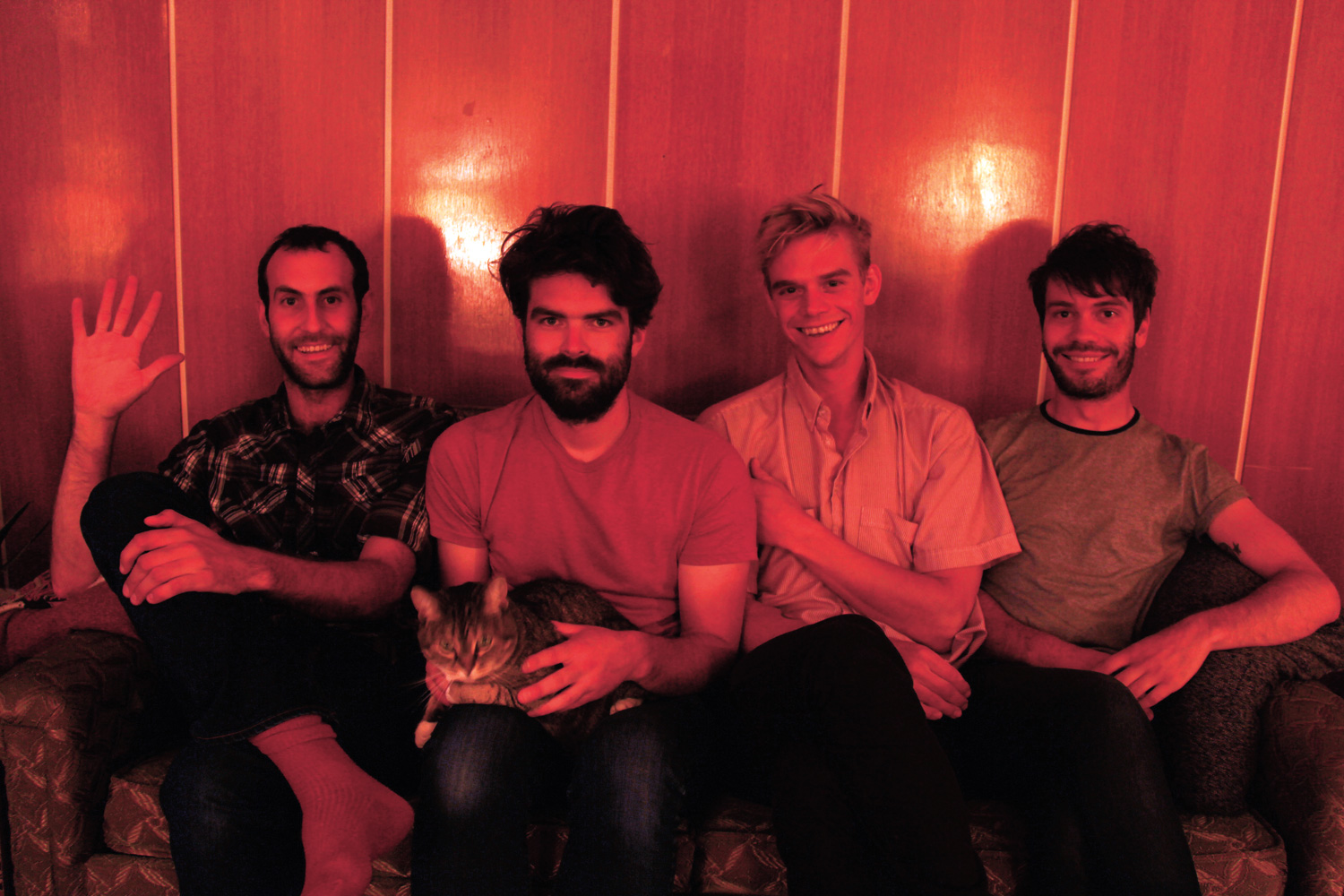 Kicking off the show was Heathers, an LA punk band, and they certainly started the show off on a loud note.  I mean, they were really loud.  When they broke into the chorus of their first song, “Adored”, I honestly kind of laughed to myself since the chorus was “I don’t wanna be adored”, quite literally the opposite of The Stone Roses’ “I Wanna Be Adored”.  I’m not sure if the pun was intentional, but I liked it.  My favorite song from the bunch was “Frank”, which they seemed to turn into their own extended jam filled with all sorts of wacky guitar improv and a killer bass tone.  Overall, Heathers did a great job at opening up the show, and, if you’re into punk, definitely give them a listen or two.

Next up was Canadian band Freak Heat Waves, and they sent the show on a little more of a math-rock path (appropriate for a Viet Cong show considering the math-rock elements present in their music).  The three-piece presented a style of music that was both intriguing musically and yet also so funky at times.  A great example of this combination is in “Dig a Hole”, which was probably my favorite song from their set.  The guitar improvisation was always interesting and creative.  And not only that, but the guitar dared to venture out of the music’s comfort zone with the added risk of playing notes not necessarily “normal” to the key.  That, to me, is a sign of true creativity.  However, the one area I found to be lagging in their set was the stage presence.  While the bassist seemed to be grooving and enjoying himself onstage, the guitarist and vocalist presented little to no stage presence.  There is a certain line beyond which a frontman’s nonchalant, lackluster behavior starts to negatively affect the set rather than enhance the mood, and I think that Freak Heat Waves’ frontman occasionally stepped beyond that line.  However, I still found their musical style and creativity to be enthralling, and so I am definitely planning on checking out more of their music. 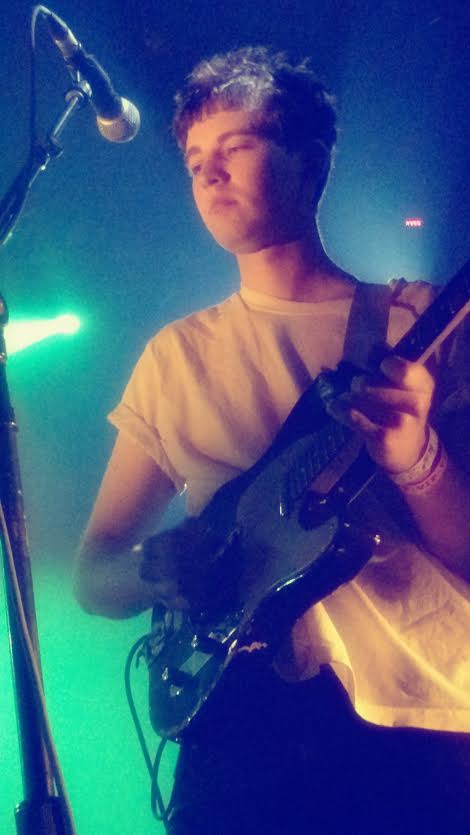 Finally, the main event.  At the start of Viet Cong’s set, Matt Flegel (bass, vocals) brought out a sack filled with beer among, oddly enough, granola bars and fruit to feed the crowd.  Then, before you know it, Viet Cong blasted into their first song of the night, “Throw It Away” off of their cassette release.  They continued with the older material for the next two songs with “Unconscious Melody” and “Oxygen Feed”.  Out of their older material that they decided to play, I enjoyed “Oxygen Feed” the most since it gives me kind of a surf-rock feel (I could be way off, but honestly that’s kind of the feel I get from it). 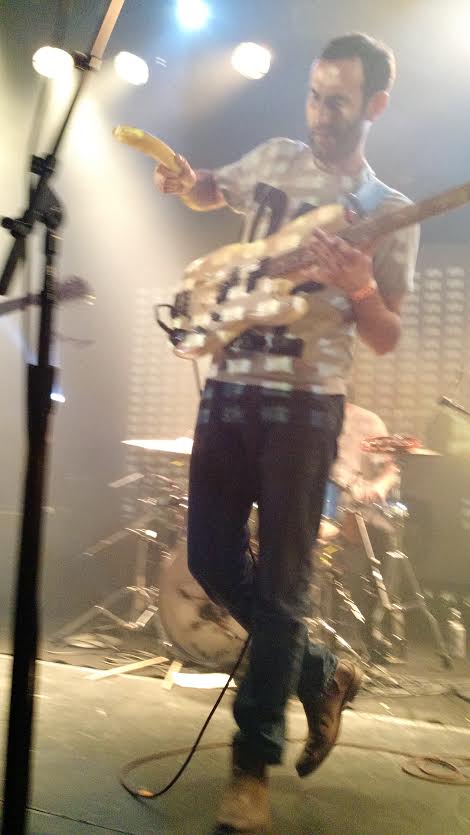 Then, the band finally got into material from their debut album with “Silhouettes”, one of the more upbeat songs from their self-titled album.  During this song, Matt decided to pick up one of the bananas from the “gift bag” and use it to play the bass, splattering banana all over the stage and his bass.  That was definitely one of the highlights of the show.  “Bunker Buster”, the most math-rock sounding song on the album, came next.  It’s one of my personal favorites from their debut.  It has a great funky bass part in addition to great use of their two guitarists to get the full studio effect.  And finally!  Both guitarists mounted their positions next to keyboards and synthesizers as Michael Wallace (drums) burst into a driving, repetitive beat.  Keyboards washed over the Echoplex as “March of Progress” (my current favorite Viet Cong song) sought to hypnotize the audience with its infectious beat.  Passing by the regular studio song time, the band let loose with a longer version of the song with a little bit of improvising thanks to Danny Christiansen (guitar).  Danny and Scott Munro (guitar) made great use of their two-guitar sound on this track in particular (much like “Bunker Buster”) with the back and forth arpeggios found in the middle of the song. 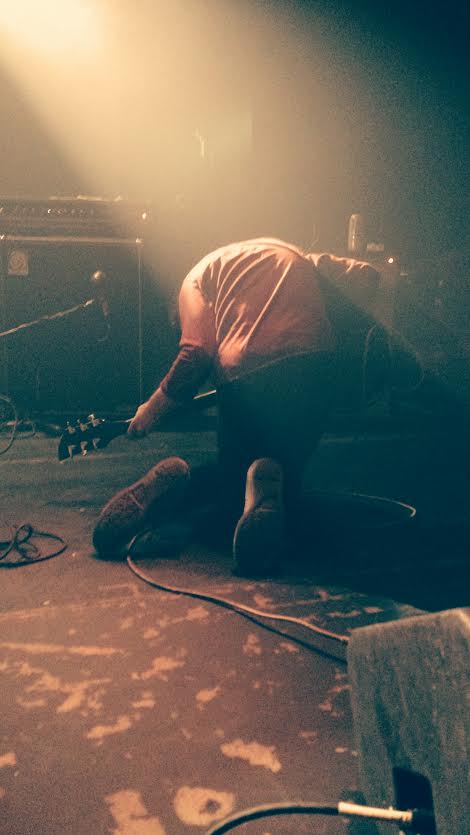 After “March of Progress”, Danny got out his Rickenbacker as the band jumped into a great version of “Continental Shelf”, the first single from the band’s debut album.  The intro had a dueling guitars thing going on while the melody was being bounced back and forth from Danny to Scott.  During the verses, Danny really came into the spotlight with fantastic improvising on top of Matt’s washed out vocals.  Danny got really into their song, getting on his hands and knees and just jamming out.  With that, the band started the intro to “Death”, the final song (and the longest song) from their self-titled album.  Before you know it, Michael jumped in with the pounding drum beat, and the song was off.  During the extended breakdown of “Death”, the crowd got super excited and started to rattle the front railing back and forth in time to the music, and somehow the timing was actually pretty good despite the weird time of the breakdown.  Viet Cong extended this breakdown for as long as possible, and the song ended up being around 20 minutes long (about twice the album song time) with some extended jamming.

Going to see Viet Cong with two other excellent bands at such a great venue was a wonderful way to spend my last night in LA.  Viet Cong have a great stage presence from bringing out snacks for the crowd to playing instruments with bananas to just interacting with the crowd and being really into the music they play.  The two guitarists make for great reproduction of studio sounds, yet Danny and Scott also bring a fair share of improvising to the show.  Hopefully, they will decide to come to Nashville so that fans of the band will get to witness them doing what they obviously love to do: entertain people and make great music.