Hey if you’re feeling sad, or maybe only a little sad, or going through some relationship problems, or maybe feeling that life is thwarting your every attempt at happiness or you lost your dog and you can’t find them or you know your dog’s whereabouts and you’re currently playing with them then you need to get on over to Trust fund’s bandcamp page and listen to their new album at least 4 times. Think of it as self-help that actually helps the self. Plus it’s really fun.

Trust fund is from Bristol and is headed by Ellis Jones, a young man who I can only assume is also from Bristol and also seems to be a first-rate lover of dogs, cats, and writing sugary indie pop riffs and melodies. Trust fund also seems to be less of a “band-band” or “solo project” in the traditional sense, and more of a way for Jones to write and perform music with a shifting group of friends. Jones’ songwriting is truly great here, and this is an album where the lyric sheet comes in very handy for two reasons, the first being that Jones’ words are sometimes drowned in noise and the other being that you really want to know what this man is singing. His distinctive, highly pitched voice matches the fast-paced indie pop jams very nicely, and on the slower moments it delivers an extra emotional punch.

No one’s coming for us is a little record, which is to say that the production is comfortably lo-fi and it plays for only 30 minutes and there are no grand “arrangements” or long instrumental suites. Yet in its half-an-hour running time it runs eleven excellent tracks through you; by the time it comes to an end you’re almost forced to play it back to catch the lightning. The standouts here are aplenty, and for me every song on here holds a lot of merit but I would say the obvious frontrunners are “Cut me out” and ‘Essay to write; yet the deeper cuts “Idk”, “January” and “Jumper” are all excellent as well. “Idk” and “Jumper” both carry painful lyrical explorations of relationships hanging on threads though “Idk” deals with the loss though a bittersweet duet and acoustic melody, and “Jumper” veers into scuzzed-out noise riffing.

Trust fund “comes” from a interconnected scene/wave/group/ of UK bands and artists who are both rooted (to varying degrees) in DIY and friendship which is all you can really ask for in a scene. Bands such as the excellent indie pop group Martha, psych rockers Hookworms and Eagulls, and off-kilter indie rockers Menace Beach as well as noise pop darlings Joanna Gruesome (who Trust fund put out a spilt 12″ with) all make up this quasi-network of great UK indie rock. Besides churning out quality music all these aforementioned UK bands seem to have also erased the need (and maybe existence?) of Yuck. (rip Yuck / I liked the s/t )

I’d rather not step into the mire of saying who sounds like who and “recommended if you like X” since we all hear different things (I hear Prince in Lil B’s music) but at their highest points, Trust fund reminded me of The Wrens at some of their greatest points (I heard “Hopeless” and “Thirteen Grand” all over this record). I’m going to end this review though before it turns into a vague tribute to The Wrens.

Also, for dog lovers only: in addition to having eleven of the best indie pop songs of 2015, Trust fund also lays claim to the bestmusicvideoofalltime, so watch the video for “Cut me out” and dare not to smile. 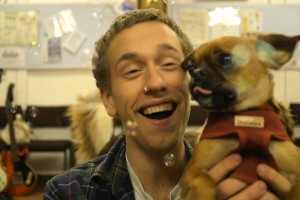