Sufjan Stevens has never been afraid to bear his heart to an audience. Even at his most thematic and theatrical–2005’s masterpiece Illinois–he wasn’t shy about including a line like “I cried myself to sleep last night” as the centerpiece of a song before asking the listener to question “are you writing from the heart?” But while Illinois buried its confessional nature amidst richly arranged baroque pop playgrounds, Carrie & Lowell is a thoroughly intimate affair; all you’ll find here are fluttering guitars, double-tracked vocals delivered with a whisper, and haunting synthesizer elegies bookending the album’s brisk tracks. It is an album that is simple and anguished to its very core. 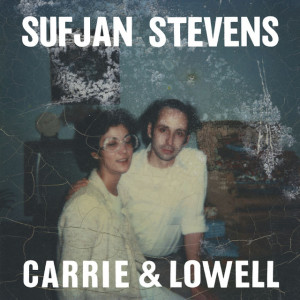 The titular Carrie & Lowell are Stevens’ mother and stepfather, and in hearing this album it is impossible to miss Stevens’ grief over the loss of his mother in 2012. Focusing on his childhood memories and its relation to his foundational understanding of his parents, Stevens uses Carrie & Lowell as a way to navigate himself through the turmoil of losing the woman who gave him life. Sufjan channels this most powerfully into “Fourth of July”. The verses alternate between the perspectives of Sufjan and Carrie, with Sufjan telling of the cancer that “spread like a fever ahead” before his mother reassures him “I’m sorry I left, but it was for the best” and that “we’re all gonna die”, turning a fatalistic quip into the most poignantly reassuring refrain in Stevens’ catalog. Much of the album tackles similar lyrical ground, with Sufjan often, quite literally, negotiating with his mother, crossing the boundary between life and death and using songwriting as a way to conquer–or at least accept–death. Yet, this album also contains surprising doses of humor, such as the memory of his swim instructor mispronouncing his first name as “Subaru”, or Stevens referencing Casper the friendly ghost in the stunner “No Shade in the Shadow of the Cross”.

Musically, the album fits perfectly within the somber tone cast by Sufjan’s lyrics. His voice, more frail than ever, often sounds on the verge of disappearing entirely, and his tear-soaked upper register features more prominently than on previous albums. To hear him somehow carry on through 44 minutes of music with such precarious grace is staggering. Likewise, the songs are similarly frail, and like Wilco’s 2004 album A Ghost is Born often feel as though the contingent parts of each melody are about to fall apart and disappear into silence. Songs clip off neatly at the end, leaving no space for a gentle death, or otherwise dissolve into synthesizer sound collages. These extended droning codas are some of the most perfect pure sonic expressions in Sufjan’s body of work, with the conclusion of album-closer “Blue Bucket of Gold” being notably beautiful.

That said, this album is not without imperfection. Its obvious comparison is to last year’s monumental Benji, which also dealt with death and grief; but unlike Sun Kil Moon’s album, Carrie & Lowell lacks the fundamental aggression and power that made Benji such a remarkable work. Admittedly, tracks on Carrie & Lowell often blend together, with each song’s fluttering guitar lines becoming indistinguishable from the last. While this gives the album tremendous unity, it also left me wanting a bit more sonic stimulation. The album’s similarity is partly why the surprise of blossoming guitars and strings during “The Only Thing” turn it into the album’s standout track.

Regardless of these faults, Carrie & Lowell is still an album with moments of profound power amidst a starkly confessional and realistic portrayal of death and grief, and a testament to the beauty that can be found even in the aftermath of life’s end. Stunners like “The Only Thing”, “Death with Dignity”, and “No Shade in the Shadow of the Cross” bolster the album against the doldrums of repetition, as does its daring and intimate lyrical content. Carrie & Lowell stands with Illinois as the pinnacle of Sufjan Steven’s work.