After months of anticipation, Death Grips’ second half of their final two-part album, The Powers that B, is finally available to the public. Entitled Jenny Death, this album was uploaded to YouTube months after the first half of the album, N***** on the Moon, was released for free (reviewed here by WRVU DJ Brett Tregoning). After their break-up announcement via napkin last summer, fans have been on edge to listen to what could potentially be the final installment in their discography. As always with the painstakingly unpredictable group, things have not always been very transparent with the band. However, the band always delivers on their album promises, and this time the wait was worth it.

Jenny Death is a drastic departure from the work on N***** On the Moon, in both sound and song structure. The first installment lacked any real song structure and incorporated a “jittery-ness” beyond anything else we have ever heard from a Death Grips album. It was mechanistic. It was abstract. It was glitchy. However, the work on Jenny Death was much more tangible, with hooks and verses, and certain songs like “On GP” and “Centuries of Damn” that feature an accessibility that has been unheard of since the release of Money Store in 2012. What makes this release stand-out from their recent work is that they were able to achieve accessibility without sacrificing the ethos of Death Grips. The strength in Jenny Death is that it is able to reach out and still connect with an audience, without coming off as confused and out of place like Kanye West’s Yeezus. While both incorporate elements of what has been described as “industrial hip-hop”, in comparison Yeezus lacks the unbridled aggressiveness and gut-wrenching rawness of Jenny Death. It is clear that Death Grips is not holding anything back with songs like “Pss Pss” where the titular onomatopoeia is meant to mimic the sound of MC Ride pissing on someone’s face. MC Ride’s shouted spoken word that sometimes passes as “rapping” is as abrasive as ever on “The Powers That B”, and just as previous albums Death Grips juxtaposes the animalistic shouts of MC Ride with the hyper-technical drumming of Zach Hill, creating an amalgam of primal spirit and complex beats. 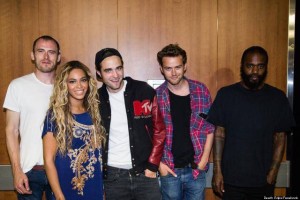 Death Grips has gained quite a following over the years.

Death Grips’ rich history of unrelenting frustration and anger with society and life has often gained them comparison to punk rock, but usually that comparison would have been limited to ideology. Musically, Death Grips has been all over the place and trying to pin them into one genre would be hopeless. However, songs like “Beyond Alive” and “On GP” actually feature relatively clean sounding electric guitar and there is an unmistakable rock influence to “On GP”. The influence is further substantiated when MC Ride says he is “Axl Rose in a blender/ Slash on Satan’s Fender” on an earlier track “Inanimate Sensation”, which perhaps implies that MC Ride is more untamed than the two legendary rock stars from Guns n’ Roses. Like with most Death Grips lyrics, it is not very obvious what exactly is being said. However, this album is in step with the themes of earlier albums, tackling issues like drug use in “Inanimate Sensation” (or pretty much every song really), the suffocating confines of society in “Centuries of Damn”, and suicide with “On GP”. MC Ride also addresses some less familiar themes in this album, like dealing with fame and recognition while wanting to be left alone. The soul-crushing weight of societal confines and the pointlessness of life weave into a sort of narrative throughout the album, where we find out that “The Powers That B” is cosmic code that MC Ride chooses to live his life on, which is a way of life incompatible with how modern society operates. He makes it clear that we are not changing his mind either: “You get no f**** from me/ I run the company”. What really defines this album is that the narrative does seem to go somewhere, and at the end of “On GP” MC Ride leaves us off on a somewhat positive note, explaining that despite the pointlessness he sees in living, the support of his friends and family have kept him around. The nihilistic and depressing picture that MC Ride paints (sometimes using blood and urine for color) throughout the album seems much more cathartic than helpless with this relatively intimate ending.

The final track on the album is Death Grips 2.0, which is perhaps another indication of a rebirth for Death Grips. The track is an instrumental stylistically similar to the electronic chirps of Fashion Week, and is more of an outro than a track What this means for Death Grips is unclear, but they recently announced plans for a tour date…but we all know how reliable that is. The official release for the album is March 31st, but there is no telling what the future has in store for the group. In the meantime, this album has somehow justified the rollercoaster ride Death Grips has put followers through.