Sunflower Bean turned heads with their first full length album Human Ceremony, released back in 2016. Their debut’s breadth and urgency was illustrious of the band’s burgeoning appetite for a life beyond New York City’s DIY scene, and was ultimately successful in helping them realize the musician’s cliched dream of making it out of one’s hometown. After putting out music for only a year prior, the record was an impressive start for bassist and singer Julia Cumming, guitarist Nick Kivlen, and drummer Jacob Faber. The Brooklyn based trio were young and ambitious then— as they still are now, although their energy has become undeniably more harnessed— and these characteristics were central to Human Ceremony’s sound and thesis. The album was appropriately all over the place musically, with tracks ranging in style from shoegaze to surf rock to psych pop, and influences like the Velvet Underground and Black Sabbath obvious (in some cases on the same songs). Now, Sunflower Bean is back and more polished than ever on their sophomore release Twentytwo in Blue.

This record is a drastic departure from the hodgepodge of singles that comprised Human Ceremony. Released on Mom+Pop on March 23rd, at which point all three members were twenty-two years old, Sunflower Bean’s new project demonstrates a level of maturation congruent with two years of tour and studio time. However, Twentytwo in Blue’s newfound sonic consistency and well roundedness still hit somewhat unremarkably. The record is beautifully dreamy and enjoyable, but lacking in inventiveness and lyrical prowess at times. It touches on feelings of dissatisfaction and unease with the current political landscape, but fails to do so with enough conviction to really be productive in its criticism. Disaffection is a recurring theme across the album, but Sunflower Bean are not writing protest songs. In such turbulent times— times ripe for artistic intervention— that feels like a bit of a cop out. 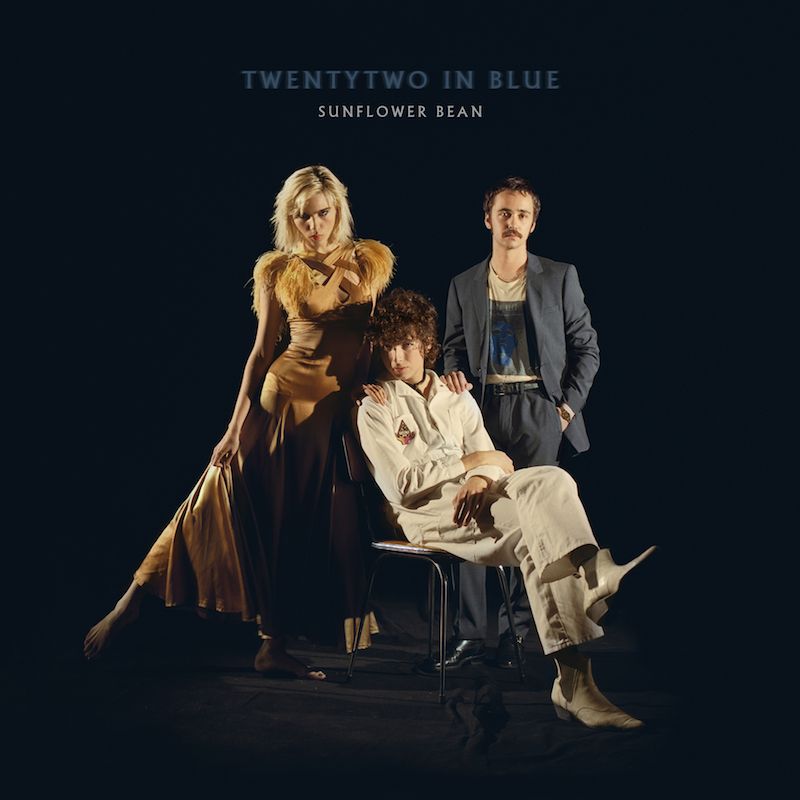 But Twentytwo in Blue has plenty of good moments. Opener “Burn It” is chalk-full of huge, fun riffs. Sort-of-title-track “Twentytwo” is arguably the record’s lyrical peak, and puts Cumming’s vocal talent on display in a way that Human Ceremony never fully did. The song explores the effects of societal expectations placed on women, and then stands up against them with a comforting resolve that is simultaneously soft and strong (something we don’t see enough of in rock music). Borrowing elements from Dylan Thomas’ poetry, “Twentytwo’s” chorus of “I do not go quietly/Into the night that calls me/ Even when I’m alone,” is eloquently resistant. “Human For” similarly rejects the status quo and blows through confident refusals of love, religion, and attempts to fit in with an exhilarating rapidness. Compared to the refined and measured nature of the release as a whole, this track’s hard hitting audacity is a breath of fresh air (especially for those who enjoyed Human Ceremony’s recklessness).

“Crisis Fest,” which was put out ahead of the LP as one of three singles, is Twentytwo in Blue at its most overtly political. The track is compelling for its driving and dance-y qualities, but is notably weaker when it comes to content. “Puppet Strings” has similar shortcomings, and juxtaposes lighthearted and somewhat juvenile lyrics against compositional maturity.

Yet despite these occasional lapses in strength, the record in its entirety is an impressive followup to the band’s debut. Twentytwo in Blue functions as a testament to Sunflower Bean’s capacity for evolution, and the rate at which they accomplished such progress says something worth noting about where these guys are headed. The trio are not the archetypal indie kids they once were, but that may be a good thing. Shedding the chaos of those identities gave them room to refine their style and develop their sound, the product of which is a holistically curated aesthetic that manages to remain genuine. Twentytwo in Blue has its moments of mediocrity and missed opportunity, but as an album it is wonderfully whole.