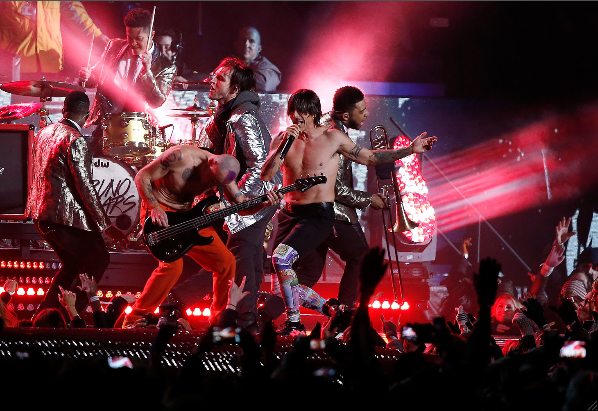 Flea, your bass is unplugged…and since when did Chad Smith look like Bruno Mars instead of Will Ferrell?

If you grew up a rock music fan in the first decade of the 2000s, as I did, the Red Hot Chili Peppers likely provide much of the soundtrack of your formative years.  Songs like “Can’t Stop” and “Dani California” populated your early-generation iPods, and you familiarized yourself with the oldies that stood the test of time: “Give it Away,” “Under the Bridge,” etc.  Listening to these songs probably invokes a good deal of nostalgia.  They stand the test of time, too; listen through Californication again today, and relish in the tight, emotionally thick beauty of its fifteen tracks.

Given these assumptions, you were probably just as pumped as I was to hear that the Chili Peppers would be joining Bruno Mars for the Super Bowl XLVIII halftime performance.  By the time the teams headed to the locker rooms and Seattle had ensured that the game would be akin to watching a monster truck run over the same poor car for three hours, you were probably relieved that some good music would interrupt the tedium.  Bruno Mars, sure, cool, but the CHILI PEPPERS!!!  I was so excited, I had even set up a betting pool with my family, trying to pick the three songs they would play.

But the Chili Peppers only played one song, emerging from the stage like gophers to jam out to “Give it Away,” and then being sucked back into the ground so Bruno could serenade the teenage girls with “Just the Way You Are” (a title, by the way, that should always be associated first and foremost with Billy Joel).  Not taking anything away from Bruno Mars–he’s a solid songwriter and a better performer, and apparently drums too–but one song for the band of our youth?  And this dagger was then compounded by the revelation, later confirmed by the great Flea himself, that the performance had been pre-recorded.  You can read his whole explanation here, but it doesn’t ease the pain that the Red Hot Chili Peppers, one of the most energetic live acts of the past 30 years, had faked it in front of over 111 million TV viewers and thousands of fans in the live audience.

Sadly, this is only the latest step in the decline of the Red Hot Chili Peppers.

It all started when John Frusciante left the band for the second and final time, as the band went on hiatus following their tour-de-force double album Stadium Arcadium.  While RHCP’s oldest devotees would probably say the band hasn’t been good since they diverged from the LA punk-funk scene in the early 1990s, the majority of music fans look at the period from 1999-2007 as peak years for the Chilis.  Their music in this era was eclectic but harbored a certain brilliance, paying homage to the band’s hardcore past while introducing a softer side and infusing elements of jazz, soul, and blues.  And the engine behind this sonic shift was John Frusciante.  When he rejoined the band in 1998, his drug use had rendered him incapable of playing the guitar, but somehow he turned his relearning of the instrument into the beautifully minimalist Californication, widely considered (along with the seminal Blood Sugar Sex Magik) to be their greatest work.  By the Way and Stadium Arcadium followed, and on each Frusciante was responsible for most of the music.  Though these albums featured a much softer, mainstream-sounding RHCP, their songs are well-crafted and catchy, and there’s no denying that this is the point at which they were reaching their largest audience, the zenith of their global influence.  This is when they should have been playing halftime at the Super Bowl, which had been giving us experienced pop-rock acts like Prince, Paul McCartney, and the Rolling Stones in the wake of the Justin Timberlake-Janet Jackson Nip Slip of 2004.

But then Frusciante left, uncomfortable as ever with life in the mainstream, and the band slipped into its incontrovertible slide.  Those who had railed on the “selling out” of the last two Frusciante-dominated albums were now joined by a chorus of others who realized that the band would be incapable of replacing the songwriter primarily responsible for its success.  The band was voted into the Rock and Roll Hall of Fame in 2009, but this represented an acknowledgement of its critical role alongside Nirvana in bringing alternative rock to the forefront of the American consciousness in the early 1990s; in short, they were entering the world of old geezers.  This was made even clearer with the release of I’m With You in 2011, their first post-Frusciante effort.  Josh Klinghoffer makes an admirable attempt to fill the void on guitar, but in listening to the album, you can tell that’s what he’s trying to do–fill a void.  His use of effects to create an ambience on each track is neat, but he’s incapable of stepping in and dominating a song the way Frusciante could, and dominance is what the Chilis have always been about, from their tube sock days to the awesome extended jams that continue to dot their live shows.  You can tell the songs are missing their powerhouse, and unfortunately, no one is able to fill that gap, despite the incessant energy of Anthony Kiedis and Flea, whom I’m convinced is made entirely of rubber.

This brings me to my evaluation of the halftime disappointment from this past Sunday.  Here’s a band that is undoubtedly past its prime, brought in, according to the NFL, to “appeal to older audiences.”  But here’s the thing: because the Chili Peppers had two clear peaks, one from 1989-1992 and another from 1999-2007, they don’t just appeal to older music fans; they are generally popular among anyone between the ages of 18 and 55, and as such could have carried a show on their own.  To promise RHCP and then give us one song–one prerecorded song–was a slap in the face to a huge portion of the television audience.  At least Beyonce, last year’s performer, is appreciably more accomplished than Destiny’s Child, and it made sense to bring out her former bandmates to create a fun reunion.  Presenting two acts capable of filling arenas and festivals and then brutally subjugating the far more accomplished one to the up-and-coming other practically screams that the former no longer commands respect.

The Chili Peppers have to know this–and yet they did the show, despite only playing one song (with Bruno Mars still onstage, joining in with Kiedis) and having to pre-record this song.  As Flea states in his open letter to RHCP fans, the band has historically turned down all mimed performances, even getting booted from a British show in the late 80s for refusing to mime accurately.  I understand that the Super Bowl is the Super Bowl, and playing the halftime show would be an amazing experience.  Hell, even if the band had gotten the chance to play at the game six or seven years ago, they may have been forced to mime the performance anyways.  The miming isn’t even the real issue here; if the Chili Peppers had to mime, it makes sense that Bruno Mars’ musicians were also faking.  But no one is complaining about Bruno Mars’ performance.

The real issue is that the Red Hot Chili Peppers broke a decades-long code of musical integrity to play second fiddle–on ONE SONG–to another performer.  To me, this is evidence that the band realizes how far it is from its peak.  This is evidence of a continued decline, one that began after Stadium Arcadium topped the charts around the world.  And when you’ve fallen so far, any opportunity to get back in the limelight sounds enticing.

Maybe I’m putting too much emphasis on a fifteen-minute concert.  But it’s just sad for me to see this icon of my musical taste continue to fall from the halls of respect.  How do you feel about this whole issue?  Comment below, and we can open this up for further discussion.