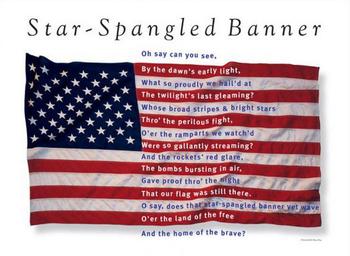 Why do singers mess up these words so frequently?

It’s Olympics time, and that means patriotism is at a relative high here in America.  So is the potential to wile away the hours in front of non-stop sports coverage.  It’s taking all my willpower to keep my eyes on my laptop as the American hockey team plays the Czechs on the television in front of me.

But there’s one thing about seeing the United States in international competition that bothers the hell out of me: our national anthem, when compared to those of other countries, just doesn’t cut it.

This isn’t to say that “The Star-Spangled Banner” is a bad national anthem.  The lyrics are inspirational and speak well to the resilience of our nation–Francis Scott Key wrote them after witnessing the American forces survive the British bombardment of Fort McHenry during the War of 1812.  The tune to which these lyrics are set is rousing and works well, particularly at spectator sporting events.  And, of course, it’s impossible to dissociate the song from the emotional associations attached to it.  In times of crisis, the Star-Spangled Banner is a rock for us, a symbol of our grace under pressure and our determination to succeed no matter the odds, the very virtues that have led America to become the richest and most powerful nation on the planet.  In times of revelry, the anthem is a celebration of the fruits of the labors powered by these values.  And, of course, when sung in a crowd, the power of the song is incredible.

But that doesn’t change the fact that musically speaking, the Star Spangled Banner is not ideal as a national anthem.  It has its origins in an old English drinking song called “The Anacreontic Song,” composed in the 1760s; the music and lyrics were first combined in 1814 and the new song gained popularity throughout the 19th century until it was eventually standardized and officially crowned the national anthem in 1931.  There is a certain irony in America’s repurposing of an English song to become a symbol of our freedom from Britain, but a drinking song is not beautiful and regal in the way that typical national anthems are.  Perhaps this is the ultimate symbol of American dominance and the populist strain running through our country’s history–“we sing a tavern standard to celebrate how much better we are than you, and let’s have a nice Budweiser while we’re at it”–but the song doesn’t convey an appreciation of beauty or a sense of majesty, both central appraisals of America by its citizens.  In addition, the song is hard to sing, both melodically and lyrically.  The words aren’t easy to remember, and the melody sprawls out over an octave and a half (and often this range is extended by vain and extravagant singers).  Check out this compilation of national anthem fails: it’s fair to wonder whether some of these people were celebrating the song’s heritage by performing it inebriated.

Let’s compare our grand old anthem to those of some other countries, starting with the host of these Olympic Games, the Russians.  Their anthem is huge, heroic, and makes a lot of musical sense.  Try to detach yourself from emotional associations, listen to the Russian anthem, and see how far short the Star-Spangled Banner falls in terms of the music.

That comparison may be hard to make, considering that the majority of readers of this blog probably don’t know Russian and therefore can’t fully grasp the interaction between the melody and the lyrics.  With that in mind, let’s look at the anthem of our neighbors to the north.  “O Canada” has a melody that is beautiful with a manageable range, just one octave.  The words are simple and easy to remember, yet get across a message of pride in the country and the willingness of the Canadians to defend their freedom.  Short and sweet does it for Canada.

Do I think that we will change our national anthem to conform to the style of other nations’?  Not a chance.  But that doesn’t mean that The Star-Spangled Banner is the best possible choice for us, or objectively the best of all national anthems.  I’d be much happier with a song like “America the Beautiful,” which celebrates the beauty, freedom, and expanse of our country and does so in a more aesthetically pleasing fashion than our current selection.  It’s also much easier to sing, and harder to embellish to the point of distraction.

All that being said, there’s nothing that can replace the boisterousness of our national anthem, especially when it’s sung in Chicago, where arguably the best anthem tradition in all of sports takes place: you stand and cheer when The Star-Spangled Banner starts, and you get louder and louder until it’s over.