As a Chicago native, Pitchfork Music Festival was a summer staple. There, musicians are friendly and approachable. It’s easy to push through a crowd or hop into the mosh until it carries you forward, ribs pressing against the front barrier so hard they might crack. The fastest way out is always up via crowdsurfing, so long as the hands of those around you to deliver you from the thick of the crowd without getting injured. This is not guaranteed. Walking with purpose and confidence can get you backstage. Except at one of the largest festivals in the country.

The lineup for Music Midtown was killer, featuring the likes of Lizzo, Billie Eilish, Vampire Weekend, Sigrid, Travis Scott, and Cardi B gracing one of the festival’s four stages over the two-day endeavor. Sponsors included Bumble and at least ten liquor vendors which set the weekend mood.

We caught Sigrid first. She performed her energetic melodies to a swaying crowd from a hilltop stage. The sun beat down on her and her band, all of whom sweat through the set but maintained a fun, dancy vibe. Soon after, I followed the flow of the crowd down the hill to Banks’ set at the nearby Roxy stage. She sported an all-black ensemble that looked markedly warmer than Sigrid’s airy white attire. Still, she whipped her long black ponytail across the stage and delivered a great show. Her dancers augmented the performance with staccato moves punctuating her tight vocals. Songs from her new album were a hit with the festival’s patrons (as well as members of the WRVU staff who recommend her Nashville show on 10/15 at MMW).

After her performance, the crowd at the Roxy stage solidified into a single entity. No one could move and Madison Beer, who performed earlier in the day, started throwing water bottles into the crowd from the VIP + section. Lizzo came on soon after and delivered her empowered anthems between pep talks about femininity and self-love. For those not aware of the Detroit native’s musical background, Lizzo’s flute interlude over “Truth Hurts” came as a shock. Seasoned listeners anticipated this solo and the subsequent “b*tch” that she screamed with delight. 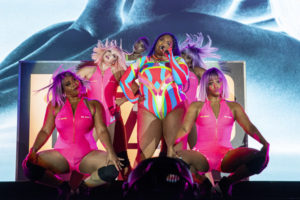 Cardi B energized the crowd by twerking on every set piece on the stage. First, a handrail. Then, an oversized motorcycle from which she tossed her bedazzled Louboutin stilettos into the crowd. The energy morphed from an atmosphere of community to one of exaggerated hostility. The onlookers, packed even tighter than the previous acts, danced wildly into others without apology. In some ways, Lizzo and Cardi addressed different needs in a single population. Lizzo as a foundation provides structure and advocacy for those in need of a voice while Cardi serves as the impetus for amplification. Together, the two women inspire countless young individuals. 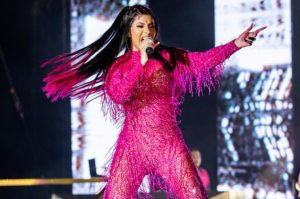 Cardi B performing at Music Midtown. Image courtesy of Billboard.

The next day, Billie Eilish’s early-evening set went over poorly because the crowd could hear only whispers of her singing over the noise of thousands of fans. Her voice cut in and out, revealing only fragments of words. From where I stood in the crowd, she was a small green wave of hair that bobbed intermittently above countless heads. When Billie’s set was almost over and she started playing “Bad Guy” for the second time, most of the crowd began the exodus over to Travis Scott’s headlining set or out the gates.

Festivals are moving and electric, but sometimes the exit is my favorite part. When doing so, speed is your friend. Start slow where the crowd is dense but make your presence known by utilizing quick, small strides. Wind your way around couples, through groups of friends, mind your manners and say excuse me, and dance your way out of the crowd.