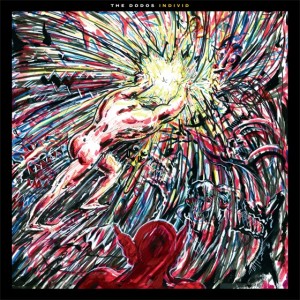 Indie rock is a fickle playing field, rivaled only by rap perhaps, in terms of its endless hum of hyped artists rising up only to evaporate into the void. So in terms of indie longevity, The Dodos are doing pretty well it would seem. With six albums and almost 10 years of experience touring, recording, and writing music, Meric Long and Logan Kroeber have led a confident path of exploring the ranges of their own sound, while also releasing excellent music. 2013 saw the release of Carrier, a quiet stunner of a record, one that grappled with the death of Christopher Reimer, former guitarist of the terrific and now defunct Calgary band, Women. Reimer had joined the Dodos and his influence on the band can be heard in Carrier‘s precise electric guitar lines and its understated melancholy.

With Individ, the Dodos stretch farther away from the forceful acoustic strumming and flowing drums of their earlier work and Reimer’s influence becomes, if anything, more pronounced as the guitar sounds on Individ become filled with fuzz, reverb, and distortion. It takes a lot of the vacancy of Carrier and injects it with noise, but in a very well-crafted and deliberate way. It’s definitely louder than Carrier but the emotional weight of this album isn’t as different from their last in some ways. If Carrier dealt primarily with the pervasive absence and immediate emptiness that death leaves us with, Individ attempts to make sense of the pain, loss of connection, and dread-drenched anticipation that surrounds grief and death. Over its course, Long loses one and gravitates to another, but the loss of the first is still there.

“Precipitation”, the first track of the record, starts with drones and a simple guitar line, before the drums grow harder and the songs spins off into a chugging jam in the last two minutes.  Lyrically, the song deals with what its title hints at, a coming “precipitation” that may or may not be precipitated by Long himself. He sings of a “missed connection” and a situation in which both are aware of the approaching destruction. By the end of the song’s six minutes, an exhausted Long throws up his hands and resolves that the only thing to do is to escape “for good”.

“The Tide” expands on this theme, portraying with reverb-heavy guitar an image of two people staring at the onset of certain disaster. Long has given himself up to his fate here as well, almost spent as he skips the question of “can we prevent it” and arrives at “what will come after”. His closing lines concerning the impending ruin are full of wry resignation: “is this the right time or should I wait for it”

Meric Long and Logan Kroeber have always had excellent musicianship and collaboration but in the past three years Long has been writing the best lines of his career. His intense songwriting growth from Visitor (2008) to Carrier has been one of making things sparse, of imparting meaning in trim sentences rather than winding streams of words. While he displayed evocative imagery on past songs like “Holidays” Long now moves between a wider variety of writing, singing striking one liners on the catchy “Bastard” and giving a vivid telling of uneasy separation and pain on “Goodbyes and Endings”. The way he speaks of the agony of leaving behind someone who still means something to you on the latter feels utterly real and scrapes at the truth that there are rarely clean breakaways in life. Without a doubt his writing has benefited greatly from the poignancy first revealed in force on Carrier.

Speaking of the recording process for Individ, Long said that it was very free and of the moment. Songs were written as they recorded and this fast, impulsive style makes all the tracks on Individ seem natural. Nothing sticks out of place or feels too engineered, and because of this, the lagging moments of Individ feel merely in service to its high points. The sonic palette of Dodos remains more or the less the same, but they’ve always been about getting the most out of a limited set-up.

The most remarkable thing about Individ may in fact be what it indicates. With their sixth album, the Dodos sound like a band on the brink of another breakthrough. They sound right at home on this one but it also feels propulsive, as if it is hinting at a larger and grander goal. However, on its own, Individ stands comfortably with the best of the Dodos’ back catalogue. Pain and suffering color this record tremendously but it stares down the tracks at the coming train wondering already how its going to carry on. In this way, Individ is really about survival, about living under the patient thunder of life and dealing with its aftermath. The cover of the record invokes the images of Sisyphus, toiling away with his eternal hell. What seems to concern the Dodos in terms of the eternal human cycles of anticipation-pain-aftermath is how we manage to keep pushing the boulder up the hill.