Walking into class this afternoon, my professor proceeded to explain that today she was feeling more left shark than right shark. If you don’t understand the reference yet, get excited because a lot of strange and awesome (music) things happened this Super Bowl that we are going to get to discuss.

If you’re reading this from quite possibly anywhere in the United States, I am going to assume that you are aware of the major sporting event that occurred just this past Sunday. For those of you who are unaware though, Super Bowl XLIX was this Sunday, and as always, it was quite the event. To be completely honest, I did not watch the entire game but I did manage to glean a couple of important facts from it. First, apparently there was some kind of upset towards the end of the game. I’m not really all that concerned with it. Secondly, apparently Nationwide killed a kid in their commercial. That’s also not something I’m going to go into here. Instead, I figured why not talk a little more about the important parts of the Super Bowl? 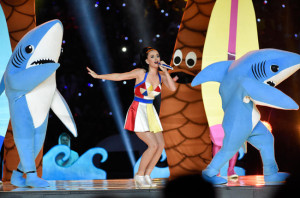 There were two major musical events for this year’s Super Bowl. First, there were the opening songs as performed by John Legend and Idina Menzel. Legend performed what is in my opinion an absolutely stunning rendition of America the Beautiful.

Now, after Legend’s performance, Idina Menzel took the field to perform the national anthem. Many of us are familiar with Menzel. She’s had several prominent singing roles, and is now perhaps most famous for her hit song Let it Go off of the Frozen soundtrack. Due to her prominence, many people had particularly high expectations for her rendition of the national anthem. Unfortunately, if current media buzz is any indication she did not manage to live up to the hype. Her performance was by no means bad, but it simply lacked the power that many viewers expected. That being said, at least she did not mess up the lyrics like Christina Aguilera in her performance at the 2011 Super Bowl.

The definitive event of the night, however, was Katy Perry’s halftime show. She broke it down into a seven song set list with a variety of musical guests. She began the show atop a mechanical lion singing her hit single Roar, then transitioned into “Dark Horse” as she was joined by dancers dressed as chess pieces. For her next song “I Kissed A Girl”, Lenny Kravitz joined in and added a harder rock-like edge to the 2008 hit. Afterwards, the set converted to a beach scene for “Teenage Dream” and “California Girls”. Perry was joined by a number of backup dancers including the infamous left and right sharks. Many viewers were completely distracted from Perry’s vocals as the shark on her left endearingly managed to completely screw up their choreography. Right shark, however, was on point. Here’s the footage so you can see for yourself:

After these two songs, Perry brought Missy Elliott on stage for a surprise performance. Now, I will be the first to admit that I know nothing about rap, but Elliott did have excellent stage presence so I would have to call her performance a success. Perry then wrapped up the night with a soulful version of her song Firework as actual fireworks went off over the stadium.

Overall, I would have to say that the music of the Super Bowl was neither good nor bad overall. Legend and Elliott absolutely won over the crowd while Perry put on an amazing performance even though her singing could have been slightly cleaner. Menzel may have disappointed some fans, but I honestly think she did a fine job.

So what do you guys think about the music of Super Bowl XLIX? Was it more left shark or right shark?