Looking at Top Charts for pop music around the world, a lot of the most popular songs are in English. What’s up with that? 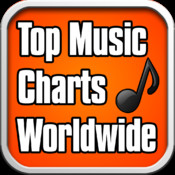 When I was younger, I went to a summer camp far away from my hometown. The camp was attended by kids from all over the world – Sweden, Venezuela, Puerto Rico, France, India, etc. It was thrilling to be able to spend time with such a diverse crowd and I was shocked to see how many of those kids spoke English really clearly, or at least were trying to.

I remember talking with some French campers one day and asking them what their favorite song was. One boy sang his answer: some gibberish in the melody of the then-popular “Whatcha Say” by Jason Derulo. Something like, “mmm.. whatcha say mmm thadda monidah hay venla shottaditta…” It was hilarious to me and the rest of my American friends because even though he had no idea what Jason Derulo was saying, he still loved the song. He’d heard it enough to know SOME of the English words and to have the melody memorized. The other French kids were familiar with it too, as were the German, Swedish, Indian, and Costa Rican kids.

While the U.S. has celebrated a great big bushel of British artists (Adele, the Beatles, the Rolling Stones) and has even adopted some songs in languages other than English (the Macarena, Gangnam Style), our top charts are regularly 100% English.

Again, this conversation is pretty specific to pop music. But still, American Top 40 radio stations incessantly play artists like Katy Perry, Pitbull, Beyonce, and Taylor Swift, etc. Other countries, specifically ones that do not cite English as a national language, have pop stars too. Why is the rest of the world fully aware of our pop music but we never hear theirs?

Although the Canadian (English-speaking) rapper Drake touches on similar lyrical themes as the French celebrity Stromae, Americans hardly pay attention to Stromae whereas the French keep up with both artists. 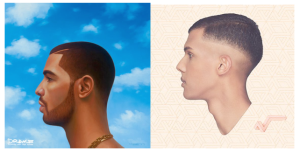 They even have eerily similar cover art for their latest albums

This phenomenon probably has a lot of causal factors but here are the ones I’ve identified:

1. English is an international trade language. Therefore, many people learn English for purposes other than listening to music and can then proceed to understand and enjoy music in English.

2. The USA is, in a sense, the hub of the western music industry. Artists who wants to make it big travel to the US. As a result many big talented music writers/composures and producers travel from their own country to the US to make it big, so many other countries loose their talented people to the US. The opportunities are simply much bigger in the US, so it attracts talent from all around the world. Even not having travelled to the US, many artists try to tailor their act to suit American audiences by learning to perform in English.

3. American culture is individualistic and experimental. The overbearing force of American capitalism drives everyone to want to come up with the “next big thing” and so American music is more experimental and it can therefore appeal to wider audiences by attending to several styles.

4. The three largest music labels (Sony Music, Warner Music Group, Universal Music Group) are American-based. Big labels have lots of resources to promote their clients in markets beyond the US. It is less easy for smaller international labels to make their way into the US market.

It’s tough to determine which of these ideas pulls the most weight in explaining what’s going on. It’s hard to know for sure whether international appreciation for English-speaking music and culture teaches people to speak English, like my French friend from camp, or whether a previous understanding of English helps people to appreciate the music. It’s hard to understand why brilliant artists from other countries often fail to achieve international fame.

C’mon English-speakers, give the rest of the world a little room to shine.