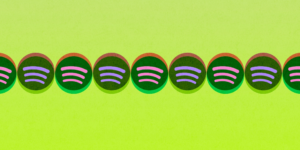 Alright, before you completely hate me for bashing your favorite source for enjoying your tunes, know that I am also a loyal Spotify listener. I even subscribed to their premium service (but I pay half price thanks to that sweet student discount ~cuz money is tight amiright?~). But it’s about time that you knew the truth of how Spotify treats the artists that they stream.

You are probably aware of the Taylor Swift incident with Spotify in 2014—how she pulled all of her music from the streaming service. And you probably understand why she did it—the amount of money she received from Spotify was a small fraction of what she could have received through albums sales. I will do my best to explain exactly how little she would have gotten paid if she had kept her music on Spotify from 2014 to 2017.

In order to do this, I’ll briefly explain the mechanical rate, or how much an artist gets paid per song. For every album sold, an artist receives 9.1 cents for each song on the album. A typical album has 12 tracks, so an artist receives about $1.09 for every album sold. The way that Spotify’s mechanical rate works is through streams. Every time a user listens to a song on Spotify, the artist is paid an average of 0.027 cents. We can immediately see the extreme difference. In order for an artist to be paid an equal amount as an album sale to a consumer, that consumer would have to stream each song 337 times on Spotify. I doubt you’ve ever listened to even one song that much (with the exception of Hotline Bling—what a masterpiece).

Recently, Spotify has been under fire for this. At the start of 2018, Wixen Publishing filed a $1.6 million lawsuit against Spotify for failing to properly pay the artists they represent, including Neil Young, The Doors, Rage Against the Machine, and many others. One good thing that may come out of this lawsuit is the introduction of the Music Modernization Act, which will change certain elements of the Copyright Act to include better mechanical rates for streamed music. This revision is well overdue—there have been no major changes to the Copyright Act in the 21st century, which means they haven’t dealt with the invention of the mp3 at all.

But the mp3 is king, and the album as a musical art form is more or less dead. Even if the streaming mechanical rates are fixed, people are more likely to buy or stream one or two songs they like than to buy an entire album, which is much less revenue than what artists made 15 years ago. But they make up for it in concert ticket and merchandise sales, which are at an all-time high and bring in a lot of money.

I fully encourage you to use Spotify—discover artists that you will soon love, and then pick a few to support financially by buying their albums and going to their shows. Without streaming services, many independent artists would never be discovered or accumulate a fan base large enough to support their artistic vision. That’s my excuse for using Spotify, and you’re allowed to use it too so long as you follow my advice. 🙂