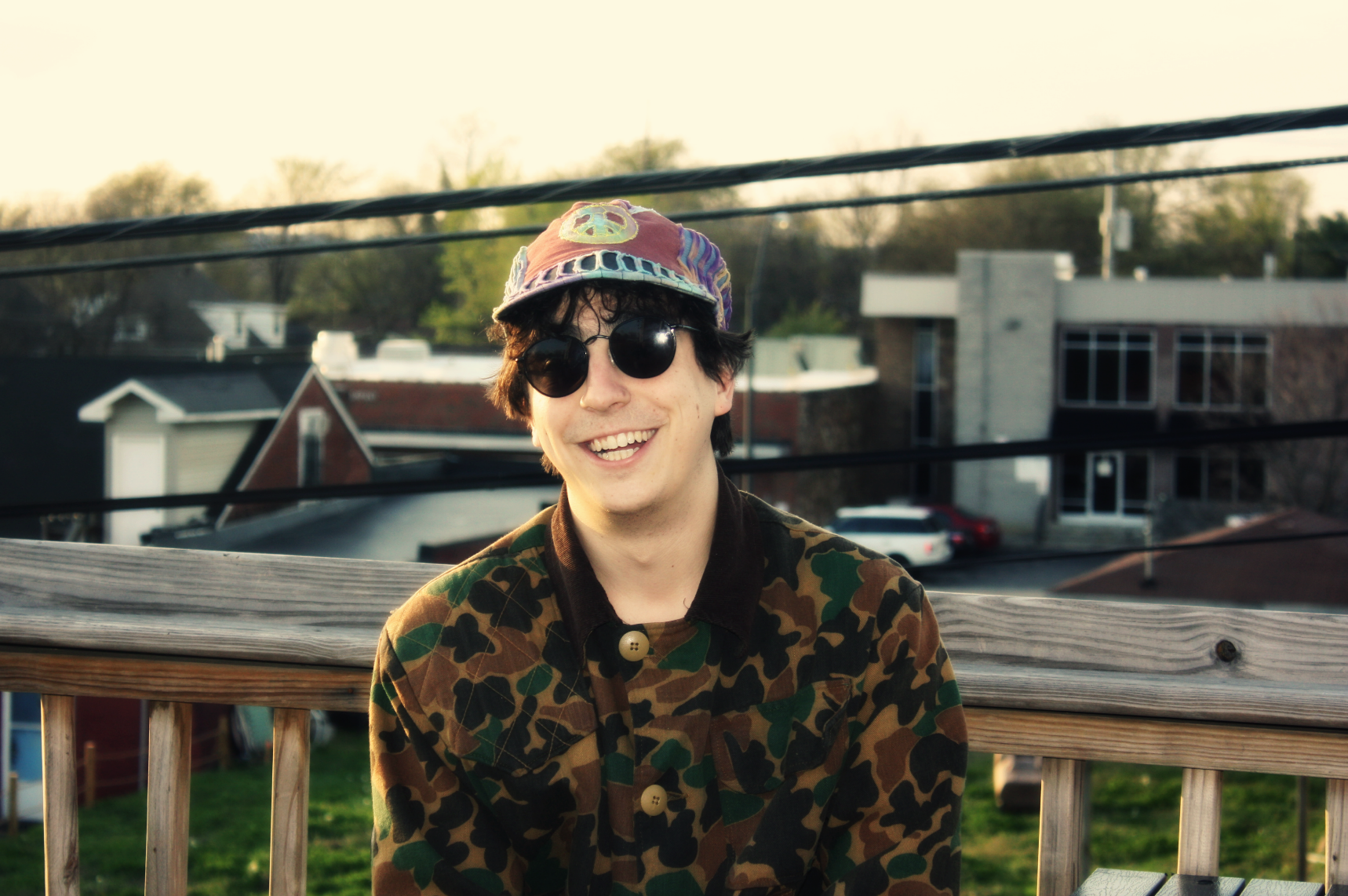 Gleams of sunlight patterned the back patio of The Basement East as WRVU chatted with Clay Frankel of Chicago-based rock band, Twin Peaks, the evening before their sold-out show. In between wisps of a cigarette, Clay shared his insights on tour life, the writing process, musical influences, his album artwork drawings, along with answers to various questions from WRVU’s DJ-created Question Bucket Hat.

Twin Peaks recently closed out 2017 with a compilation titled Sweet ’17 Singles, a balanced collection of melancholic and energetic songs consistent with the band’s quality and innovation. For a group that has been constantly on tour, nationally and internationally since their last official album, Down in Heaven (2016), they remain high-spirited and hardworking in their craft while on the road.

WRVU’s Lola Garcia, Dylan Depriest, Meredith Mattlin, and Julia Schmitt chatted with Clay Frankel of Twin Peaks on Friday, March 30th, 2018. This interview has been edited for brevity and clarity.

LOLA: So welcome to Nashville, first of all. What night of your tour is this?

CLAY: It’s been…two and a half weeks or something like that.

L: Anything special to be expected tonight? It’s a sold out show!

C: Yeah, we got percussion today, like a bongo player that we picked up on the road — It’s his second night with us. We’ve also got a tiger onstage named Goose. He sits right behind me. Or she? We’re not sure what it is. So yeah, expect good things.

DYLAN: And do you have any pre or post-show rituals?

C: I’ll drink a beer before a show, sometimes a glass of wine. I’ll do a couple of kicks, (stands and demonstrates high kicks), just a couple of those to stretch up. Then, I’ll pet Goose, our tiger.

D: What’s the story behind Goose?

C: We got Goose at the gas station! We walked in, she was just sitting there looking lonely. $35 for Goose. We just brought her onstage, mic’d her up, she sits back there and it’s just a good presence. It feels like she’s got my back.

MEREDITH: What are you most excited for on the tour?

C: Mmm! I think we’ve got a day off in two days. We got an Airbnb, we’re gonna stay with The Districts, who is the band we’re touring with. They’re really good and we love hanging out with them. We’re all gonna get into a big house by a lake and I’m looking forward to whatever may occur. It’s a little bit outside of Athens.

L: When you’re on the road, apart from the shows, how do you find yourself enjoying the cities and do you find that traveling inspires your creative writing?

C: Oh yeah, of course. Just people you meet, places you go, music you hear. I’ve been doing a lot of writing on the road. We picked up like two acoustic guitars in (thinks…) Boise. So that’s cool and now that we’ve got a trailer with a little more room, we can bring acoustic guitars around and write songs on the road.

L: And you recently dropped Sweet ’17 Singles, a collection of monthly singles you released throughout 2017. What prompted that rather than just an album?

C: We were just on the road a lot, endlessly touring. We had a lot of songs that everyone was writing. We wanted to put something out just to stay fresh so whenever we were in Chicago, in brief moments off the road, we would record a song or two and that’s sort of how that came to be. Also, we listened to a lot of Jay Reatard growing up, if you know about him, he did a similar thing putting out a series of singles so that was an influence on that.

C: Yes and no. He was in the band, he’s not anymore, but they’re still a great band. They just released a music video [Watch said video here] that’s pretty far out! Yeah, there’s a lot of good music in Chicago – wait what was the question?

L: (laughs) How does that influence you, just collaborating with other people or being generally enticed?

C: Oh it’s just a good environment to be around, I guess. It’s a good feeling when the favorite music you listen to is made by people you know and friends of yours. It’s inspiring and it makes you want to make better music yourself.

L: Also, you have Grapetooth. Would you define that as your side project and do you think that influences how you work with Twin Peaks?

C: Just another band! No, that’s me and my roommate; we’ve been living together for a while in Chicago and making a lot of music in his bedroom. It got to a point where we thought it was pretty good and we decided to play some shows and recorded a full record that we finished up right before we left on this. Hopefully that will see the light of day sometime real soon.

L: Nice! And in general, how do you think you guys [Twin Peaks] have evolved with your albums over the years?

C: Hopefully they’re all different. As we’re making records we’re discovering new music that will influence us along the way…like country music was something that we never would listen to when we were younger but driving around a lot it’s pretty good van music. So you start listening to that constantly in the van and the next time you write a song it has some of that bent to it.

J: What’s your favorite album that’s come out in the past year?

C: There’s actually this album that just came out, this band Bonny Doon, [listen to said album here], it’s a friend of Peyton’s, our tour manager. That’s really good. I just started listening to it but it’s got these two songs on it that we listen to almost every day in the van. One of them is called “I Am Here (I Am Alive),” that’s a good song.

J: What kind of music is it?

L: I’ve noticed that you yourselves don’t like to categorize yourselves into specific genres, can you talk about that?

C: I don’t think anyone in a band really likes a fixed label. It can feel like you’re being boxed in. Everyone used to call us “garage-rock,” which like, I get it, but I feel like there’s more to it than that. Who cares, it’s just music to me and it doesn’t matter to me what it’s called. I don’t think it really helps in any way to have it, it’s so easy to just listen to a band and decide for yourself what kind of stuff it is.

L: Another thing is I know you have a hand in the visual art process, drawing the album artwork. Can you talk about that and whether you think that art reflects your sound?

C: Yeah, it’s pretty amateur! (laughs) Everything we pretty much do ourselves, from recording to the artwork. It just worked out that way. Coming out with an album, you’ve got to get the art going so I’d go over to Cadien’s house, drink a few beers, draw some shit and focus it around a photograph. It’s colorful and sloppy, like our music. 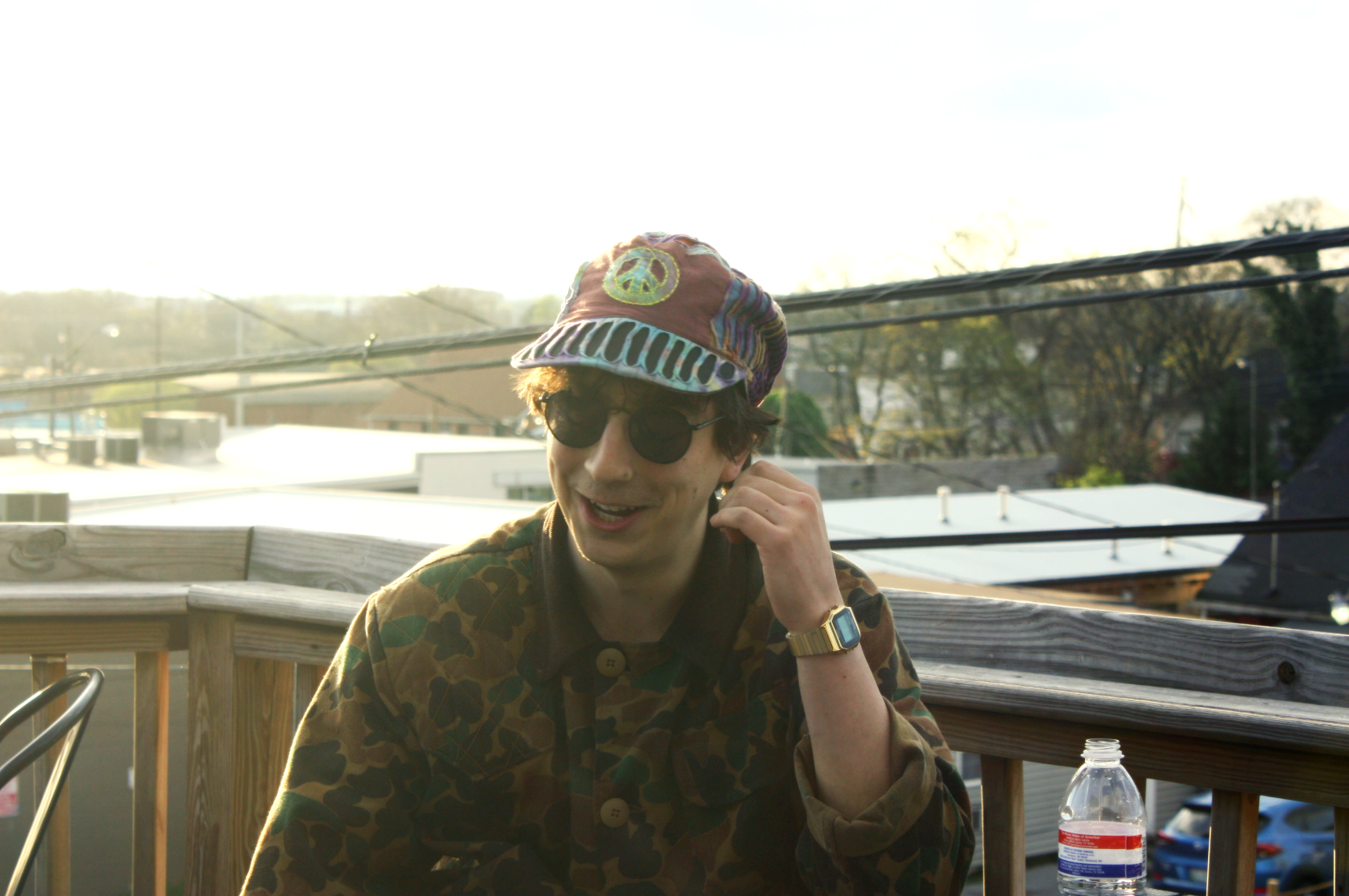 The following is a selected slew of Q&A from WRVU’s DJ-created Question Bucket Hat. Clay made it a point to highlight that his own hat, bought that same day at a local gas station, was quite cooler.

What is the best hairstyle that has gone out of fashion?

C: Connor had a haircut back in the day that we called the Fu Manchu. I don’t know if that is a real hairstyle but it was like shaved on the sides, long ponytail.

L: So that was in style?

C: (laughs) It was not in style! But it was pretty fashionable! But, now he just has normal hair.

Who would be the first to die in a zombie apocalypse?

C: Out of the band? It’s not gonna be me. I’m fast. Maybe Connor because he would go for the crowd.

If you were a piece of a drum kit what would you be?

If you could have any super power what would you choose?

C: Why? Flying! Flying would be good you know, time travel would be interesting. I would like that one.

L: For the future or for the past?

C: I would like it if every time I sneezed I went to a different time. (fake sneezes). I would still be in the same place but it would just be decades, either forwards or backwards.

Which Kanye West album are you?

C: Late Registration, maybe. That’s a good one. It’s probably the first one I listened to.

If your house caught on fire, what would you grab first?

C: I’d probably grab Hazel which is a special guitar of mine. And maybe I’d grab my roommate, too.

C: There’s been many of those. Luckily, they don’t happen too much anymore but we used to play some pretty strange places, you know, weird shops and people’s basements. We played in Washington, D.C. in this kid’s basement and his parents were upstairs. It was a little weird, a little awkward. They came down and were like “Do you guys need anything?” I was like “Nah.” (laughs). The guy was like, “No mom! Go upstairs!”

What musical artist did you listen to when growing up and/or when you were making your own music?

C: I listen to a lot of Rolling Stones, a lot of The Velvet Underground. Those are my favorites. Those inspire me a lot and they don’t get old to me. Every album is a little different and it’s good so you know you can have moments with each at different times in your life. Right now I listen to a lot of Neil Young, a record called Tonight’s the Night. I think it was actually maybe recorded in Nashville? Not sure, but that’s a good one. I listen to that almost every day now.

Stay tuned onto our site for a video of this exclusive conversation with Clay, coming soon!