Jon Bellion, a New York singer-songwriter and rapper, has steadily been gaining fame and success with each successive album that he releases. His five albums have been released over the course of the past six years and it is clear to see that his style evolves in each one. In his first few albums, there was something unique about his style of writing and vocals, but it was not yet developed enough to be able to grasp what it was. The last two albums, however, make it quite obvious what sets Jon Bellion apart from other artists. In each album, there is a clear story; a clear theme that is explored with each track. Though some of his songs might be catchy, none of them were written or produced with the purpose of being a hit single. Though Bellion cannot read music, his talent at arranging instrumentations for his songs is  evident. In addition to his own music, Jon Bellion has also penned many well-known songs for other successful artists. 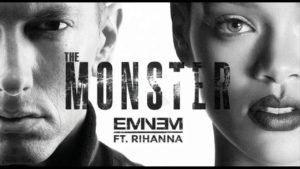 “The Monster” by Eminem ft. Rihanna, courtesy of youtube.com

The first hit single that Bellion wrote for was “The Monster” by Eminem ft. Rihanna in 2013. The song hit the top of the charts in a dozen countries and the accompanying video was nominated for several awards. Though this was earlier in Bellion’s career, his distinct writing style can still be heard in the chorus:

“I’m friends with the monster that’s under my bed

Get along with the voices inside of my head

You’re tryin’ to save me, stop holdin’ your breath

These lyrics are incredibly similar to Bellion’s “Guillotine,” in terms of how evocative they are:

“The secrets you tell me I’ll take to my grave

There’s bones in my closet, but you hang stuff anyway

And if you have nightmares, we’ll dance on the bed

I know that you love me, love me

Even when I lose my head

Bellion has also penned some less serious and content heavy songs such as “Trumpets” by Jason Derulo (2013) and “Beautiful Now” by Zedd ft. Jon Bellion (2015). These songs are much more upbeat, not written to be thought about, just to be danced to. In 2018, Jon Bellion wrote a song titled “Fall in Line” that was given to Christina Aguilera and Demi Lovato. Beyoncé also wanted “Fall in Line,” but it was too late for Bellion to back out, which he reminisced on in his song “Adult Swim”:

Beyoncé on the line, she tryna reach you on your cellular

She wanted “Fall In Line, ” but we gave it to Aguilera, uhh

I hope it’s the right decision, Bey wanted it for the twins she signed

I hope I didn’t burn that bridge, I worry all the time” 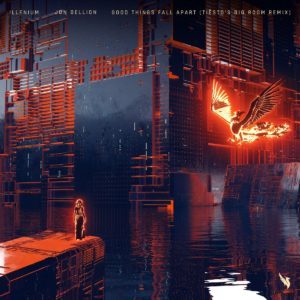 Most recently Bellion collaborated with Illenium on the track “Good Things Fall Apart” released this year. This song, along with “Shameless” and Liar” both written by Bellion and sung by Camila Cabello, are currently in the top 40 in pop radio, along with a few others that he either co-wrote or co-produced. Bellion constantly thanks the people he works with and attributes his success not only to himself, but to others and to God, as he is a Christian, but it is very clear that no matter what music he works on, he brings a unique and memorable sound. His undeniable talent and hard work in the industry has put him at the top and it seems as though things will continue to keep moving up for him. 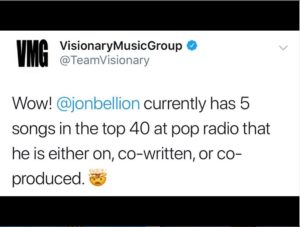