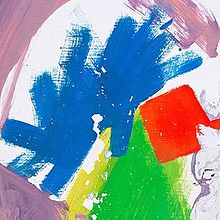 Leaving us with high expectations and wide-eyed anticipation, Alt-J’s first album, An Awesome Wave, burst onto the music scene making a name for the English indie rock band with singles “Breezeblocks” and “Fitzpleasure.” Living up to and exceeding our expectations, their sophomore album, This Is All Yours, was released Tuesday offering us a different side of Alt-J that had not been shown in the past.

The album exemplifies a variety of styles and arrangements of songs. What stands out most are the lyrics, many of which hint at a religious undertone leaving the mind wandering through ideas of what each lyric is referring to. This challenge is one of the integral parts that make the album triumphant.

Embarking on the journey through the three bandmates’ curious thoughts, “Intro” builds up slowly leaving an eerie feeling in the pit of your stomach. On to “Arrival In Nara” and “Nara”, where Joe Newman’s vocals impress and the songs lead up to current single “Every Other Freckle.”  Classic Alt-J sounding, “Every Other Freckle” showcases more instruments than identifiable and lends comfort in hearing this familiar sound we all fell for with their debut album in 2012.

This brings us to the unique sounds of “Left Hand Free” that give off a Bob Dylan vibe while channeling a motown-esque feel. The album marches on with the interlude titled “Garden of England” whose wind instruments portray the title to perfection.

“Choice Kingdom” and “Hunger Of The Pine” are two of the most lyrically driven songs with heavy yet inspirational themes and  intriguing references such as “I’m a female rebel” referring to pop star Miley Cyrus. The strong upbeat and build up throughout “Hunger Of The Pine” leads into duet “Warm Foothills” which dances through the speakers and places you in a location far from home, among mystic cliffs, warm colored flowers and solidarity. The lyrics continue to impress with “The Gospel Of John Hurt” as the album is winding to an end.

The last four songs “Pusher,” “Bloodflood pt II,”  “Leaving Nara” and “Lovely Day” bring the album to an end, unless you are dying to hit that repeat button again. Taking us to a new part of Alt-J that features strong lyrics, melodic differences from song to song, and buildups like no other, This Is All Yours is a solid album and successful sophomore release for Alt-J.