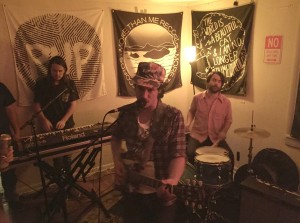 “I remember when you couldn’t walk a block here alone at night, if you know what I mean,” Jonas Stein said into the mic at Turbo Fruits’ house show appearance Wednesday night. They played with The Gills—it was their album release party—and JAWWS, two enthusiastically chaotic, too-loud-for-the-living-room acts. The show, as Stein hinted, was in an up-and-coming neighborhood in a house that you’d expect to be a tad too small for the Nashville group (who have played for crowds both locally and around the national festival circuit), but the location was good for the modest hump day crowd.

JAWWS played first, followed by The Gills, and then Turbo Fruits. I caught the end of JAWWS’ set—the punk group made just the right amount of noise, even when standing in the front yard of the house. Though their sound was not exactly solidified enough to be immediately recognizable, it makes sense that they are on Infinity Cat, the same label as JEFF the Brotherhood and Diarrhea Planet. The Gills followed, with a fun and eclectic set that was both noisy and engaging, hinting at their up-and-coming status in small Nashville music circles.

Turbo Fruits went on last. Something that makes Turbo Fruits stick out from the other Nashville local acts, aside from their relative establishment in town—they’ve been around for nearly ten years—is their catchy, upbeat-meets-garage-rock tunes, some reminiscent of the simpler melodies behind old favorites from a bygone era of DIY classic rock. That fact was clearly evident on Wednesday night, and the group rocked out just as intensely and passionately as they have on larger stages for larger crowds.

Unfortunately, the small space was a little rough in terms of the acoustics—a lot of the noise drowned out the cohesive melodies that are normally evident in their tunes. Not that it mattered all that much, as the small crowd that was present was still engaged with the band throughout their set. Stein was an overwhelming energy, wildly rocking his guitar in the space. It’s easy to have fun at a Turbo Fruits show.

What’s so unique about the house show scene in Nashville is that it hasn’t yet been trampled by the active professional music culture in the city—in fact, quite the opposite. And, of course, it tends to unite a wide variety of groups in a sometimes contrived and yet consistently effective way: devoted listeners and fans (often of the local college set), people looking for something fun to do, music groups that are working their way up, and groups that may be “Nashville famous” but have little to do on, say, a Wednesday night, but play for these fans. Turbo Fruits loosely falls into that last category, arguably being a well-known name in town and in small pockets of esoteric-minded music connoisseurs around the country.

Because of that, we can hopefully ensure that the rising popularity of Turbo Fruits (and the promising futures of both JAWWS and The Gills) will not deprive us of these intimate, more modest gatherings—which are often just as fun and even more engaging than the big-budget ones.