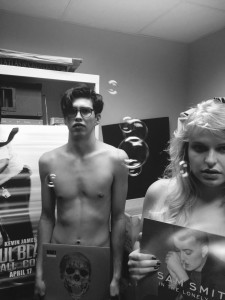 I get the idea that Heather and Travis would really love for you to listen to their show.

And I’m sure that most WRVU DJs would feel the same way – but Gettin’ Sweaty is a bit different.

They’re not here to educate you on what music’s now cool with the hip kids; they’re really just trying to improve your sex life

…and with such valiant ambition, they deserve your listenership – whether you’re getting laid or not.

The magic began when the two companions discovered they had a bit of on-air chemistry. “We would just go to each other’s shows all the time,” Travis told me.  At the time, he had his own show called Just the Tip (naming credit belongs to Michael Marks). “It was a good name without any real theme. Heather and I just decided to take it to the next level.”

Heather went on to say that around the time she and Travis thought about co-hosting she was “making a playlist to help a friend close with some girl” when she realized — this is it.

Now, Heather and Travis tirelessly organize an hour’s worth of music for listeners to have sex to every week.

So, what can you expect? “We play genres as diverse as sex,” the duo calmly explains.  You might hear anything from electronic music and hip hop to soul music and jazz; they also emphatically disclosed that you might hear “an uncomfortable amount of disco.”

So now you know. If you’re looking to get it on Thursday nights, you don’t need to worry about fumbling around in the dark trying to put the needle on that one Isley Brothers record your dad gave you before you left for college. Schedule your sex so you can tune in to Gettin’ Sweaty with Heather and Travis from 10-11pm. Old people welcome.

In case Thursday night isn’t good for you or your lover, here’s a quick sampler of the sort of stuff you would be hearing.