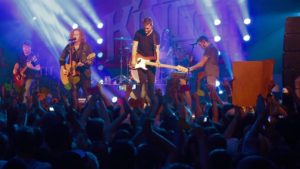 We the Kings kicked off the 10 year anniversary tour of their debut album on February 17th at the Exit/In, and aside from a brief altercation between some audience members regarding what counts as appropriate concert behavior it could not have gone better!

The first opening band, Astro Lasso, seemed pretty cool, but I got to the show late and only heard half of one song, so my main takeaway from their set was that the lead singer had on a super groovy jacket.

The second opening band, Plaid Brixx, is comprised of three guys. I think their music is pretty awesome, but it’s possible that my assessment is biased due to their impressive presentation.  The leader singer had so much energy, he did a few headstands and had such dank dance moves that you couldn’t help but bop along to their songs in equal excitement.  Plus, their merch is really freaking cool and I’m pretty sure they’re going to get super famous super fast. Highly recommend these guys. 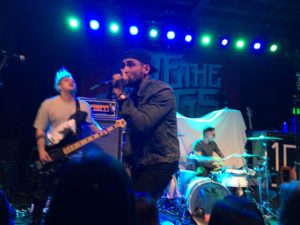 Cute is What We Aim For came on next, and my pathetic pop-punk heart was not ready for the emotions that their set brought out in me.  This band peaked ten years ago and hasn’t put anything new out since, but their first album is such a baller that even a decade after its release it still goes hard.

My main critique is that the microphone volume was way too low, and at times you literally couldn’t hear a single thing aside from the drums.  Not that drums aren’t great and all.  But I think we all wished we could hear Shaant (the lead vocalist) a little better.

At one point, Shaant hopped off stage and serenaded the audience at a ground-level, and you could see all the girls (myself included) swoon.  He gave a few too many inspirational pep talks, but what else can be expected from a pop punk vocalist? They have a lot to say. 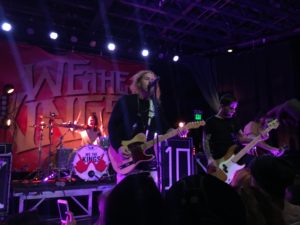 When We the Kings finally came on, they walked onstage playing their hit “Check Yes Juliet,” and the crowd absolutely exploded.  I tried to start up a pit, but nobody was into it.  Probably because the audience was primarily made up of 25 year old ex-emos and tiny 15 year old girls.  And because you can’t really mosh to a song like that.  Regardless, the crowd overall wasn’t very lit; even aggressive finger pointing was minimal.  That said, I tend to prefer dangerously violent crowds, so my judgement may be skewed.

WTK played their first full album front to back, and Travis (lead singer) paused between each song to tell some cute story or make pointless (yet funny) commentary.  He told us about the night he lost his virginity, and used tetris as a metaphor for sex.  It was truly beautiful, I think everyone fell a little in love with him.

At one point he said, “This next song is awesome. Are bands allowed to say that about their own music? Well, I’m saying it.”  It was funnier in person, but come on! How cute is that?  He even acknowledged that their best song is “Check Yes Juliet,” and they played it twice in their set.  I, for one, have never witnessed a band repeat a song in one set, and I thought it was really adorable and thoughtful.

At the end of the set, Travis turned the audience and asked us to take a selfie with him.  He turned on the front camera and set up the photo, then said, “Ew, I’m so sweaty. How are you guys still looking at me?”  What a guy.  What a band.  What a show.  So glad I got to witness it.