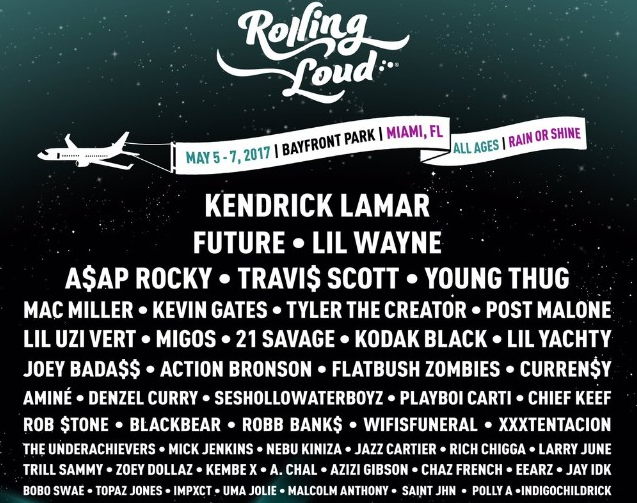 The festival bubble is growing more and more every year. Lineups are becoming progressively weaker, attendance is going down, and variety is spreading thin. The desire to appeal to everybody ends up not fully satisfying anyone. Differentiating yourself is now the key to a successful festival, and, in my opinion, the one that has done that the best is Rolling Loud Music Festival in Miami, FL.

Rolling Loud began in 2015 as a one-day festival held in a warehouse. Schoolboy Q, Juicy J, and A$AP Ferg made up the top line. Miami New Times called it “a mess” and rightfully so. Audio problems and late arrivals plagued the fest, but it was enough of a success to move the festival to the Mana Wynwood convention center in 2016 for a two-day schedule complete with Future, Young Thug, and 2 Chainz. 2016 ran much more smoothly, giving Rolling Loud the chance to upgrade to Bayfront Park for a three-day festival.

Rolling Loud has compiled what is quite possibly the greatest hip-hop lineup of any contemporary festival. By focusing the festival entirely on hip-hop, Rolling Loud has successfully set themselves apart from every other summer festival. No one else has even a quarter of the names on this lineup, which makes Rolling Loud the premier festival for any hip-hop fan. Headliners Kendrick Lamar, Future, and Lil Wayne display a fantastic combination of lyricism, trap, and legacy. Migos, who recently have hit #1 with “Bad and Boujee,” don’t even appear until the fourth line. A significant amount of the most recent XXL Freshman Class will be showing up. Underground artists like XXXTENTACION and Flatbush Zombies round out the up and comers of the lineup. So many other artists at the festival have appeared on tracks with one another, making the chance of guest appearances between sets ridiculously high. The possibility to see Migos and Lil Uzi Vert for “Bad and Boujee,” Young Thug and Travis Scott for “pick up the phone,” Travis Scott and 21 Savage for “outside,” or even Rich Chigga and his fanny pack for “Dat $tick” are not even a possibility anywhere else.

Rolling Loud shows the effectiveness of finding a niche and sticking to it. After attending Bonnaroo the last three years, the increased cost and more generic lineup (aside from the unique headliners) has reduced the chances of my returning. Other festivals suffer from similar issues. Why pay so much money if you’re only interested in a few artists on a lineup? Rolling Loud appeals to hip-hop fans by giving them almost everything. I can only hope to see more small festivals like this arise that focus less on appealing to everyone and focus more on thoroughly satisfying specific sets of people.