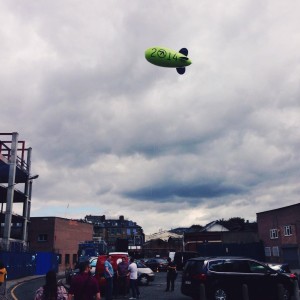 The Aphex Twin blimp over London, the harbinger of the return of Richard D. James.

On August 16, 2014 this mysterious blimp, sporting the iconic Aphex Twin logo and “2014”, appeared over London.  Soon after, the same logo appeared in street art graffiti-ed onto the sidewalk in front of New York’s Radio City Music Hall.  While many refused to buy into the hype, discussion exploded in the music community about the possibility of a new Aphex Twin album this year, which would be 43-year-old beatsmith Richard D. James’ first full release since 2001’s Drukqs.  Just two days later, Syro was announced via James’ twitter, and just one month after that music fans found themselves experiencing an Aphex Twin comeback.

It is tough to overstate the importance of Aphex Twin on the development and direction of electronic and ambient music.  Several of his works have stood the test of time as standout ambient releases and his music has always displayed remarkable creativity and layering.  Most musicians in the genre would be thrilled to enjoy even a fraction of the recognition and acclaim that James has attained over the years.  Needless to say, it is without a doubt that this album will be held to the same, or perhaps even higher, standard as his previous releases. 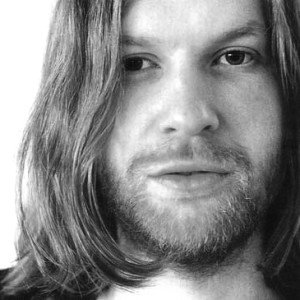 Is Syro up to the Aphex Twin standard?  Does it fulfill the hype?  My answer to that question is yes.  I believe Syro is a worthy member of the Aphex Twin discography.

For me Syro occupies a satisfying middle ground between the chaotic and spastic beats of Richard D. James Album and the elegant soundscapes of his Selected Ambient Works with a heavy dose of the darkness and grime from the Come To Daddy EP thrown in for good measure.

This album never seems to find me in a pleasant mood, for the emotions evoked by these beats are hardly the relaxing and uplifting sort found in his ambient works.  The beats are chaotic, yet smoothed over with robotic filters and soft sound effects.  The resulting sound is muddy and grimy.  Whenever I listen to this album, I feel the need to take a shower and lie in bed because I have just experienced something filthy, unsuitable for human contact.  The vocal sample of Produk 29 is exemplary of this, as it evokes the feeling of listening to the awful, judgmental comments of a group of vapid people from across the bar.  For example, the bit in the sample when they are laughing about that “f**king whore” in the club.  It is kind of gross and uncomfortable, and it makes me feel like I want to just get up and leave.  This is a feeling that pops up at multiple points in the album.

Syro is much more dance-y than previous Aphex Twin releases, which is pretty significant in its own right, however this does not serve to get me on my feet.  It combines with the overall griminess and discomfort of the album to produce a feeling that is akin to being in a club that is packed full of sweaty, superficial jerks.  If this is the mood that James was going for, then this album reflects his intention perfectly.

This is by no means a bad thing.  I love music that challenges me most of all.  I love exploring the changes in my psyche brought on by music that is particularly strange and uncomfortable.  For me, Syro stands above the rest of Aphex Twin’s discography for precisely this reason.

It is apparent that Aphex Twin is still crafting his tunes with the same razor-sharp meticulousness found in his previous work.  Every piece of this album is polished to a sheen.  The song progression is subtle, and often catches me off guard.  This is especially apparent in tracks such as minipops 67 and Syro u473t8+e in which the song never seems to be changing, but slowly introduce new melodies or drum patterns here and there, building the song up and breaking it down brick by brick.

Overall, I was impressed with James’ ability to take me out of my comfort zone.  Now I feel like I understand what it must have been like to hear one of his works for the first time in 1996, before his music established trends that our ears became accustomed to.  It is clear that even after such a long hiatus, Aphex Twin is still fully capable of pushing the boundaries of electronic music.