Omar Moctar, aka Bombino and his band are men of action. No introduction. No witty banter. The band just played, brilliantly.

Adorned in vibrantly colored bubu, the traditional Tuareg formal attire, the concert began with more traditional songs, such as Ashuhada (Martyrs of the first rebellion).  Tuareg blues, to the unfamiliar, feels familiar to classic rhythm and blues mixed with curt phrases clipped from Dick Dale outtakes. The songs are rolling, expansive. They weave unknown histories filled with beautify, hope, and sorrow.

At first, the group assumed an almost stoic air – stern jaws, downcast eyes, and a slight rhythmic sway. Humble and gracious, they paused only to utter a quick “thank you” through slight smiles. While the audience seemed stiff whenever the group’s bassist attempted to connect through apologetic English and smooth french, everyone came together as the music began. And then “Korey from Boston,” the band’s fourth member, switched from the djembe to a drum kit. 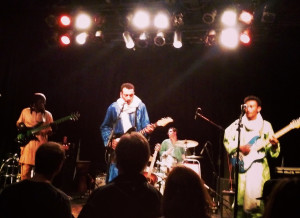 Bombino’s newest album, Azel, produced by Dirty Projectors’ Dave Longstreth and released via Partisan records, presents a new form of Tuareg music, playfully dubbed ” Tuareggae.” By combining the sunny, surfer sound of Tuareg blues with the reggae one-drop and bounce, Azel weaves a unique blend of dance hall and 70s blues rock into Bombino’s raspy vocals. The album also incorporates Western vocal harmonies, a first in Tuareg music. The result is a spirited, enigmatic album matched only by the energy of the touring band.

Iyat Ninhay / Jaguar (A Great Desert I Saw) and Timtar (Memories) seemed to be crowd favorites and evolved into a wall of sound. The music fueled a dialogue of understanding and respect where language could not.  Without pause, the crowd was left to dance, drink, and enjoy.

The most poignant moment came before one of my favorite songs, Timidwa (Friendship). The bassist, who acted as spokesman all evening and seemed the most at ease on stage, took a breath and explained his frustrations with how the world (or the West) sees his country. “It’s like life. When you see [our] war, poverty, troubles. Don’t believe what they say about our life. Think of this music.” As the band began to play, asking the audience to clap and sway in unison, one could hear the unspoken final phrase – and the way it makes you feel.

As the night continued, Bombino continued to unveil his talent as a guitarist. Stunning solos streamed together the dance-hall rhythms characteristic of Azel. It’s hard to imagine how the artist plans to continue to innovate the sounds of his homeland. Until then, take a moment, and enjoy.